A close loss eliminates the Berlin Thunder from the playoffs! 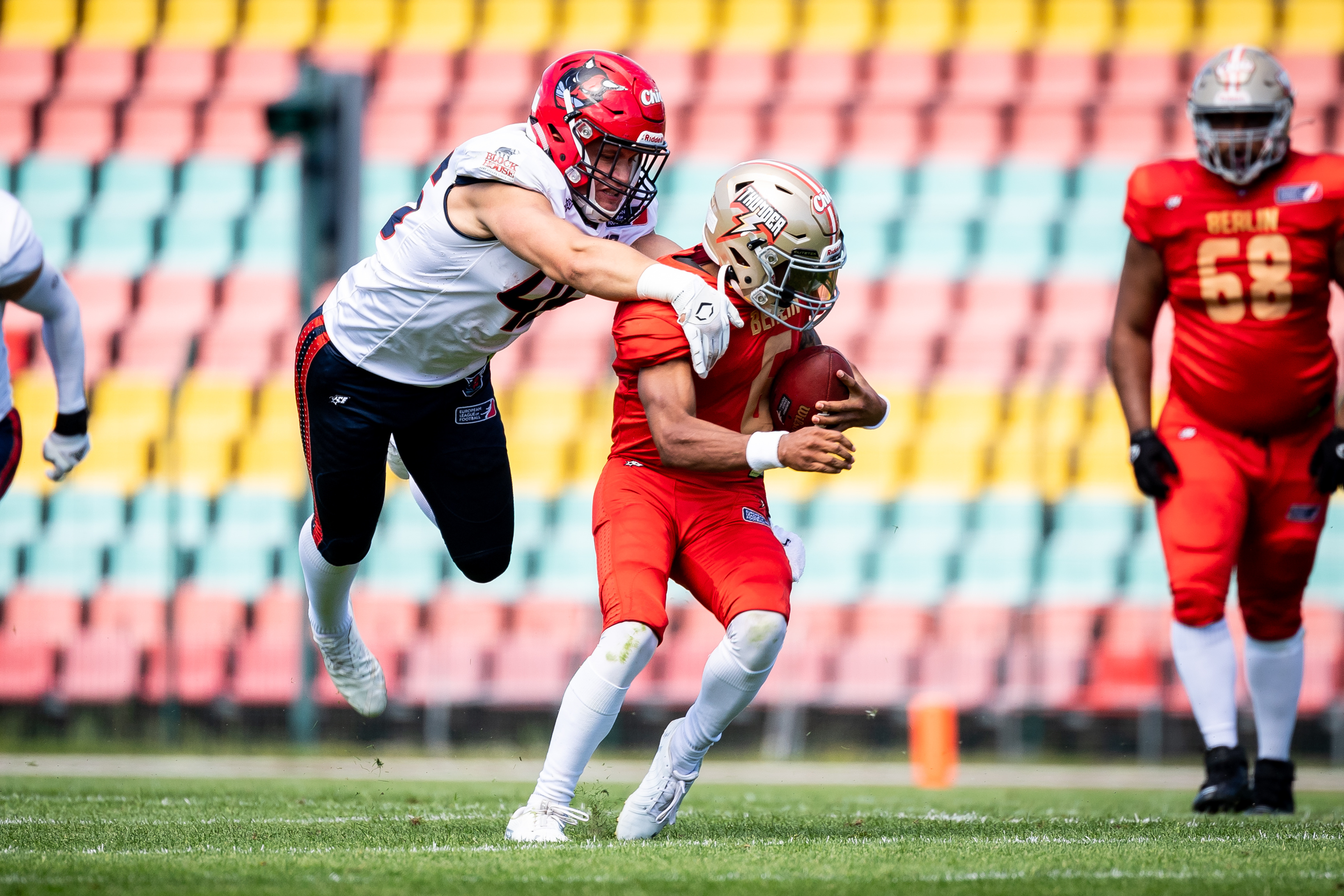 The 6-1 Hamburg Sea Devils travelled to the German capital to face the 1-5 Berlin Thunder. After loosing to the Frankfurt Galaxy last week, the Sea Devils looked to bounce back against their conference rival. However, several key players are out for this game including linebacker Kasim Edebali and defensive lineman Jan-Phillip Bombek which made it difficult for the Sea Devils to play on their top level defensively.

Berlin Thunder Head Coach Jag Bal said, “We are ready”, referring to the matchup against the Sea Devils on a social media post by the team. With a few of their injured players coming back, the Thunder were looking to break their loosing streak and upset the 6-1 Sea Devils to not be eliminated from the playoffs. The game kicked off under great weather circumstances just short after 1 p.m. CEST.

The Thunder kicked off the game with a squib quick which was returned to the Sea Devils 44-yard line.  After moving the chains, Sea Devils running back Xavier Johnson was used on the ground and through the air. On a blown coverage, Clark found his tight end Botella Moreno in the endzone for his fourth receiving touchdown of the season. After the PAT was good, the score stood at 7-0 with Hamburg up early.

On Berlin’s first possession, quarterback Stitt was struggling to find offensive rhythm early. After a few pass attempts and a longer run by Stitt on fourth down, the Thunder were not able to move the chains which forced them to punt.

Sea Devils quarterback Clark completed a few short passes to avoid pressure by the Thunder defensive line. On a long third down, Clark overthrew his intended target which resulted into an interception caught by Thunder defensive back Paul Seifert.

Because of the turnover, Berlin started their next drive in Sea Devils territory. After being close to a second straight three-and-out, Sea Devils defensive back Müller held an offensive player which gave the Thunder a fresh set of downs. On the next play, wide receiver Seantavious Jones took the direct snap at quarterback and attempted a deep throw to fellow American Joc Crawford which ended up being incomplete. However, running back Crawford ran up the middle for over five yards twice which was enough to move the chains. After a penalty against the Thunder, Jones lined up at quarterback again but only gained two yards on a short run. After a sack against Stitt, the Thunder were forced to punt the ball away with 1:23 minutes left in the first quarter.

The Sea Devils started their next drive with a handoff to running back Xavier Johnson and a few pass attempts before the clock ran down and ended the first quarter.

Hamburg started the second quarter at their own 25-yard line. Surprisingly, Clark already attempted several passes to his receiver Nassim Amroun who caught his first catch of the season today. After a long pass to receiver Kwame Ofori, Johnson found a huge hole up the middle and made some defenders miss for a huge gain. A few plays later, Clark found his tight end Botella Moreno for a second touchdown of the day on the left side of the field. After the PAT was kicked through the uprights by Andersen, the score stood at 14-0 with the Sea Devils dominating the game so far.

On the very first play by Berlin, Stitt fumbled the ball on a handoff to Crawford which was recovered by defensive lineman Hiswill Awuah.

On the Sea Devils first play of their nextdrive, Clark threw his second interception of the day which was caught by JaMaal White.

The Thunder were back on offense but were notable to move the chains as Stitt overthrew his wide receiver Zerbe which could have been an easy touchdown off a free release from the line of scrimmage. Consequently, the Thunder were forced the punt the ball again on their third three-and-out.

The Sea Devils were also stopped withing their own territory after they went for it on fourth down. Clark had to get rid ofthe ball under pressure which turned over the ball on downs.

With the Sea Devils inside Thunder territory, they were stopped on third down. Going for it on a short fourth down, quarterback Clark kept the ball himself and moved the chains on a QB-sneak. On a quick out, Clark found his receiver Amroun again for a chunk of yardage. In the redzone, Clark was pressured out of the pocket but found his tight end Botella Moreno across the field for his third touchdown of the first half! After the PAT was good, the Sea Devils were up 21-0 with just a few minutes left in the second quarter.

Stitt was sacked once again before the two-minute warning. The Berlin offense was never able to find offensive rhythm in the first half of this game, just like on their last drive before half time.

The Sea Devils had one more chance before half time to get on the scoreboard. After being stopped on third down, Andersen lined up for a 40-yard field goal attempt. Despite being the most accurate kicker in the league this season, he missed the field goal.

The Berlin Thunder desperately tried to put points on the board on a last drive with 20 seconds left in the second quarter. Instead, cornerback Justin Rogers picked off Stitt to end the first half with ascore of 21-0.

The Berlin Thunder started off the second half on offense. Early one, the Thunder converted on a third down with a pass to tight end Nicolai Schumann delivered by Stitt. However, Crawford was not in the game on the first drive. Despite the quick third down conversion, the Thunder were forced to punt the ball after their longest drive of the game so far.

Crawford was back in the game returning the kick-off but stayed on the ground after he was tackled at the Thunder 29-yard line due to an apparent injury. After a defensive pass interference called against Müller, Stitt and his offense got some more breathing room with a fresh set of downs. With Crawford back in the game, the Thunder offense went for it on fourth down pitching the ball to Crawford on an option play. This play set up Berlin at the six-yard line in the redzone. On the very next play, Stitt found Crawford in the endzone for their first points of the game. After the PAT was good, the score stood at 28-7 with Hamburg still on top.

On the first snap of the Sea Devils next drive, Clark fumbled the snap, and the ball was recovered by Hill to give the Thunder another chance to score with great field position.

Starting the drive at Hamburg’s 25-yard line, Jones caught a pass by Stitt and dragged Sea Devils defenders with him into the endzone for a quick score. After the PAT was good, the new score stood at 28-14. At that point, Berlin scored two touchdowns under one minute of playing time!

The Sea Devils were under pressure in their next drive as Clark was sacked by Boadu and den threw an incomplete pass on a long third down because he was under pressure again. After a short drive, the Thunder forced the Sea Devils to punt the ball with under two minutes remaining.

Berlin faced a long third down early on their next drive. Despite having Jones open between two defenders, Stitt missed his players, and the Thunder were forced to punt.

After a high snap, Clark made the most of a broken play and returned the ball to the line of scrimmage to end the third quarter.

The Sea Devils were forced to punt at the beginning of the fourth quarter which gave the Thunder another chance to come back into the game.

Stitt found his receiver Zerbe on the first pass attempt for over 20 yards and ran up the middle for another first down. Finally, the Thunder offense had some momentum and rhythm to get dangerous. On a free play, Stitt fired a deep pass to Jones which was caught and set up the Thunder offense in the redzone at the 13-yard line. One play later, Stitt found Jones for another touchdown to make it a one-score game! After the PAT was missed, the Thunder trailed the Sea Devils by only eight points with the score set at 28-20. At that point, Berlin scored 20 unanswered points!

Rogers showed why he was named the MVP a few weeks back as he returned the kick-off for a touchdown. However, this highlight play was called back because of a holding called against the Sea Devils during the return. On first down, Jadrian Clark was sacked by Adedayo Odeleye. Then, Johnson was tackled for a loss of six yards. As the Sea Devils faced a third-and-24, the fans in Berlin were supporting their team with loud chants! On top of the previous great defensive plays, Johnson fumbled the ball which was recovered by the Thunder. This set up the Thunder offense at the Sea Devils 15-yard line.

Facing a short fourth down, Stitt was taking down before he reached the first down marker. This turned over the ball on downs.

The Sea Devils took over on offense on their own nine-yard line with a little bit over seven minutes remaining in regulation. However, the Berlin defense looks awake in the fourth quarter shutting down the run game of the Sea Devils completely. Consequently, the Sea Devils were forced to punt again.

The Thunder had another chance to force a tie in that game with 4:48 minutes remaining. However, Stitt pitched the ball to the left where no players was there to receive the ball. Because of that disastrous misunderstanding, the Thunder had to punt the ball on fourth and long.

Clark and his offense were barely able to move the chains on their next drive which set them up with a fresh set of downs and two minutes remaining in regulation. The Sea Devils ended the game in winning formation as the Berlin Thunder had no time outs left to stop the clock.

Next week, the Sea Devils will host the Panthers at home in an exciting conference rivalry game. The Thunder will host the Barcelona Dragons in week ten of the regular season in another interconference game.