The Hamburg Sea Devils sign a new running back to their roster for 2022 after successfully reaching the European League of Football Championship Game in 2021. 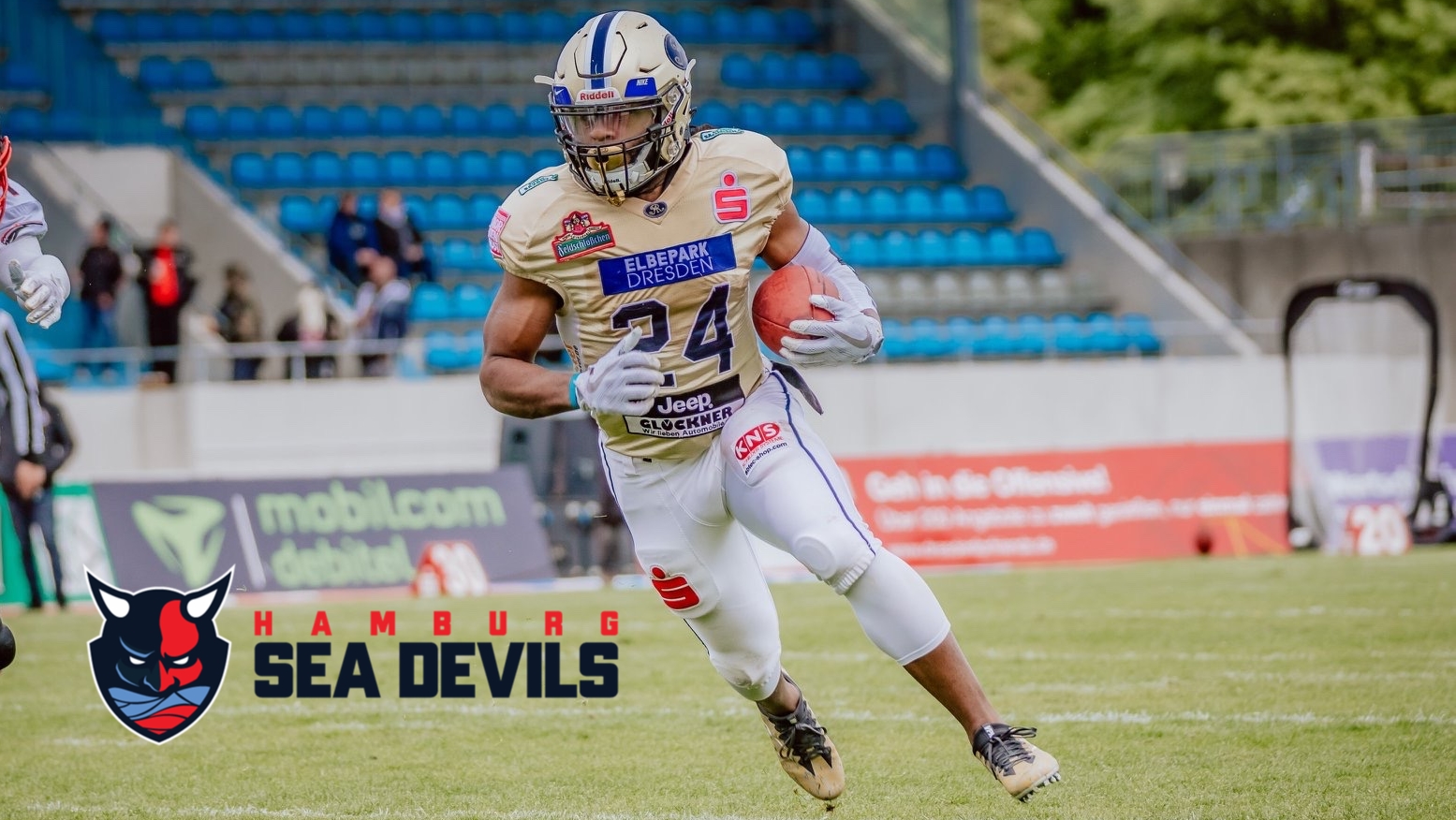 British standout running back Glen Toonga signs with the Hamburg Sea Devils, as the franchise announced on their social media outlets.

“I’m so excited, extremely grateful too. The organization performed really well last year so it means a lot that they’ll be trusting me as their running back”, Toonga explained in his interview. He added: “Hamburg is a beautiful city. So, it’ll be great to spend this season there and get the chance to play along some of the guys that will be there next season, too”.

Toonga put up incredible numbers at the CFL Global Combine in 2021. He recorded 16 bench press reps, a 4.77 40-yard dash, and a 7.07 3-cone drill. More than half a year later, Sea Devils general manager Max Paatz could not pass up on signing one of the best running backs in Europe:

“In my opinion, Glen [Toonga] is one of the best running backs in Europe which he proved in the last few years in the GFL and Poland. I’m excited that we are able to welcome him to our franchise. With him, our offense is going to be even more versatile and aggressive. His 103 kg and 180 cm make him a powerhouse: but he possesses great athleticism and an outstanding vision at the same time. So, we will trust him and our German running backs in 2022.”

Being part of the best American football league in Europe

In 2021, Toonga ran for 1132 yards, 13 touchdowns and averaged impressive 6.82 yards per rushing attempt with the Allgäu Comets. Now, the ultra-talented running back signed with the Hamburg Sea Devils.

When asked why he chose to sign with a franchise in the European League of Football, Toonga's answer was clear and simple: “It’s quite simple really, I want to play with and against the best guys in Europe”. Toonga continued: “So, many of Europe’s best talent is going there. So, as a competitor it only made sense to go there and compete on the big stage. I think the European League of Football put together a really good product in its inaugural season; the media, the professionalism, the quality of the product, it just made sense to be a part of it going forward”.

The British running back also touched upon his decision to sign with the Sea Devils out of all franchises in the league: “The organization in general is put together really well. From the coaching staff, to management, to the guys that I’ll be playing alongside; they’re in my opinion the best organization in the European League of Football, which in return will bring out the best in me.” Toonga jokingly added: “They also have a sexy uniform. Who doesn’t like to look good?”.

Goals for the upcoming season

After being asked what his goals are for the 2022 season with the Sea Devils, Toonga responded with a counterquestion: “Other than winning the championship?”. He added: “[My goals are] to perform to the best of my ability and put the team in the best position to win. I want to demonstrate that I’m the best RB in Europe. Right now though, my goal is to have a good offseason then we’ll go from there”.

As our conversation went on, Toonga assured me that Sea Devils fans and fans of the European League of Football are in for a treat: “[They can expect me] to put on a show. I can’t wait to meet Sea Devil Nation. Apparently, I’m always smiling too. So, I’m hoping to bring that along with me and just make sure the fans are getting a great experience. The league can definitely expect my best season as of yet.”