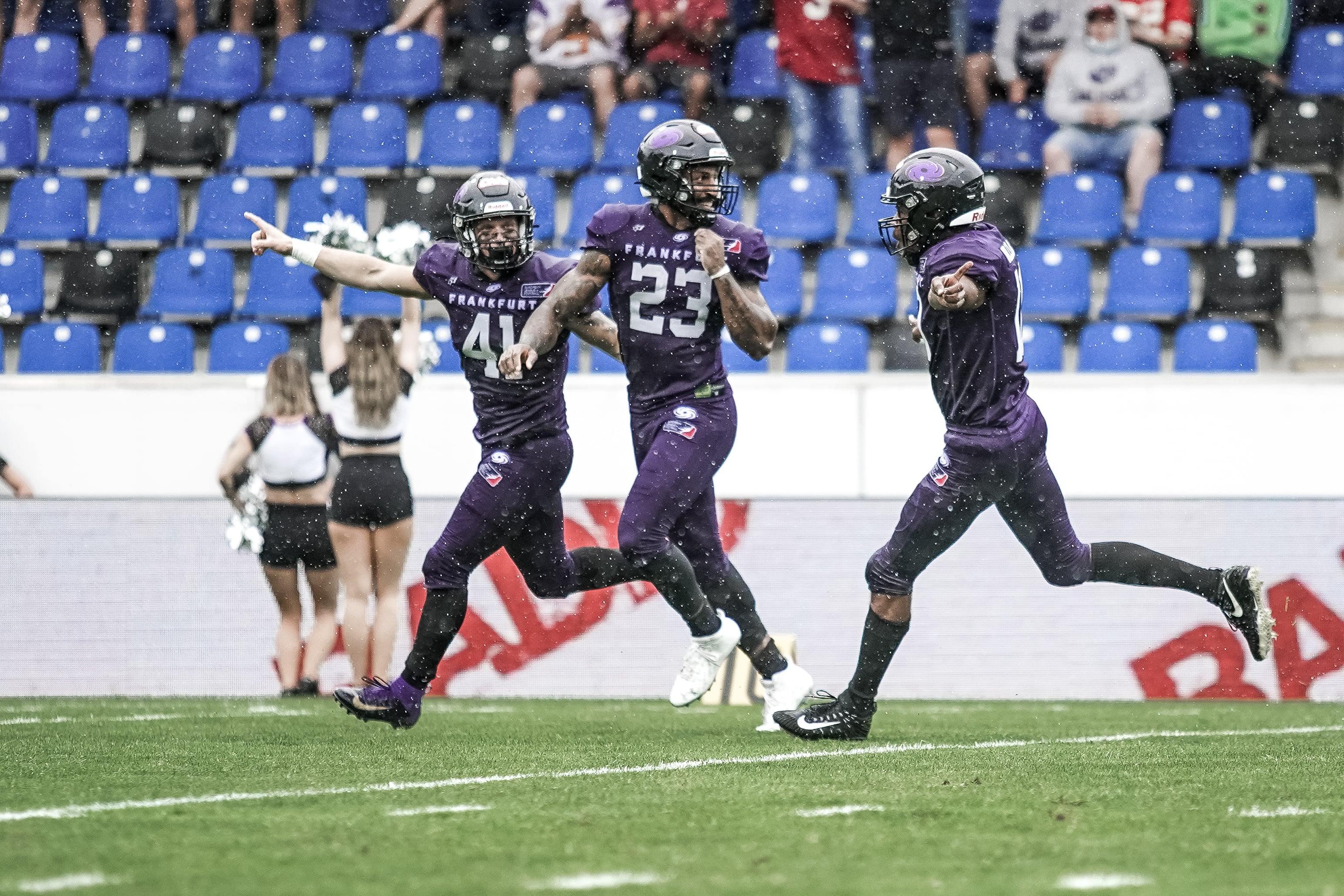 There were a lot of players who stood out in the third week of the regular season in the European League of Football. Of course, reigning “Chio MVP of the Week” Seantavius Jones had himself a day with three touchdowns, nine receptions and 155 yards receiving. But he also helped his teammate Joc Crawford to find running lanes. The Berlin Thunder running back was able to rush for 227 yards and two scores on the ground on only 17 rush attempts. But the two Americans in Berlin were not alone with their great performances, tight end Nicolai Schumann also scored a 66-yard touchdown while hurdling two Surge defenders on his way to the endzone. On the defensive side, outside linebacker Paul Seifert had a strong performance with two pass break-ups and one interception late in the game. However, new Stuttgart Surge quarterback Aaron Ellis also deserves credit for throwing two touchdowns in his debut alongside 233 passing yards and just one interception. One of these touchdowns was caught by Surge wide receiver Louis Geyer. The young German pass catcher was also able to haul in an incredible sideline catch against tight coverage last Sunday.

The “Game of the Week” matchup between the Frankfurt Galaxy and the Wroclaw Panthers included a lot of stand-out performances as well. After the game resumed and the storm calmed down, it was the Frankfurt Galaxy defense that dominated the game early on. Galaxy's defensive back Omari Williams had two interceptions on the day of which one was a spectacular one-handed atch. We spoke to Williams about his performance on Sunday and he touched upon their strong defensive outing: “Week three was a great week for football! We had some great games and ours did not disappoint. The Panthers are a good team, and we expected a battle. They came out very chatty and fought hard. As a defense we needed to make plays and that’s just what we did. Our front continued to get pressure causing us on the backend to get some picks. I was blessed enough to get two, and the best part was celebrating on the rainy day with my teammates. ‘Coach K’ [Thomas Kösling] brought me here to do a job, and that’s my goal each week. Do my job better than I did last time”.

Talking about the Galaxy defense, linebacker Sebastian Gauthier had a strong performance as well. He was the player who put the first points on the board with a pick-six in the first half of the game. On top of that, he was Galaxy’s leading tackler with four solo tackles and six tackles in total. The Panthers also had players on their defense that stepped up. One of them was Gustav Karlis Brauns who recorded one sack against Galaxy quarterback Jakeb Sullivan and also stopped Sullivan on a two-point attempt as well. Another Panthers player that had a great performance was wide receiver Jakub Mazan. He was able to catch six passes for 115 yards and the only two touchdowns for the Panthers in that game.

The Saturday-Night game in Reus was a great matchup between the Hamburg Sea Devils and the Barcelona Dragons. The Sea Devils dominated the game early on with Justin Rogers scoring a touchdown on a punt-return and running back Xavier Johnson showing his breakaway speed on different plays. Another player that stood out was former NFL pass-rusher Kasim Edebali. He not only recorded his first sack of the season but was also able to put constant pressure on the Dragons offensive line. Consequently, the Hamburg Sea Devils got through to Dragons’ quarterback Zach Edwards numerous times. The Barcelona Dragons still tried to put points on the board which they were able to do with a heads-up play on special teams. After the snap was too high for Sea Devils punter Phillip Andersen, Niko Lester showed great awareness and recovered the ball in the endzone to score a touchdown. The Barcelona Dragons also had one of the best catches of the season so far. Zach Edwards threw along pass on 3rd-and-ten to his American receiver Jéan Constant who was able to jump and use the full length of his body to make the catch.

The Leipzig Kings and the Cologne Centurions scored 95 points combined in their matchup last Sunday. As of Cologne, there is one player that was running wild again: Madre London. It seems like he cannot be slowed down as he scored four touchdowns and ran for 348 yards against Leipzig. Consequently, he scored 11 rushing touchdowns and ran for 972 yards in just three games; that is just incredible. Looking at the Leipzig Kings, their backup quarterback Jaleel Awini put on a show with five overall touchdowns, 147 rushing yards, and 341 passing yards. Former NFL wide receiver Anthony Dablé-Wolf also had a great performance with his first two touchdowns of the season and 118 yards receiving. All these players look to keep up their outstanding performance when they play against new opponents this Sunday.