The fifth week of the European League of Football showed which European team continues to be ahead and which one has to say goodbye so slowly from the playoff picture. 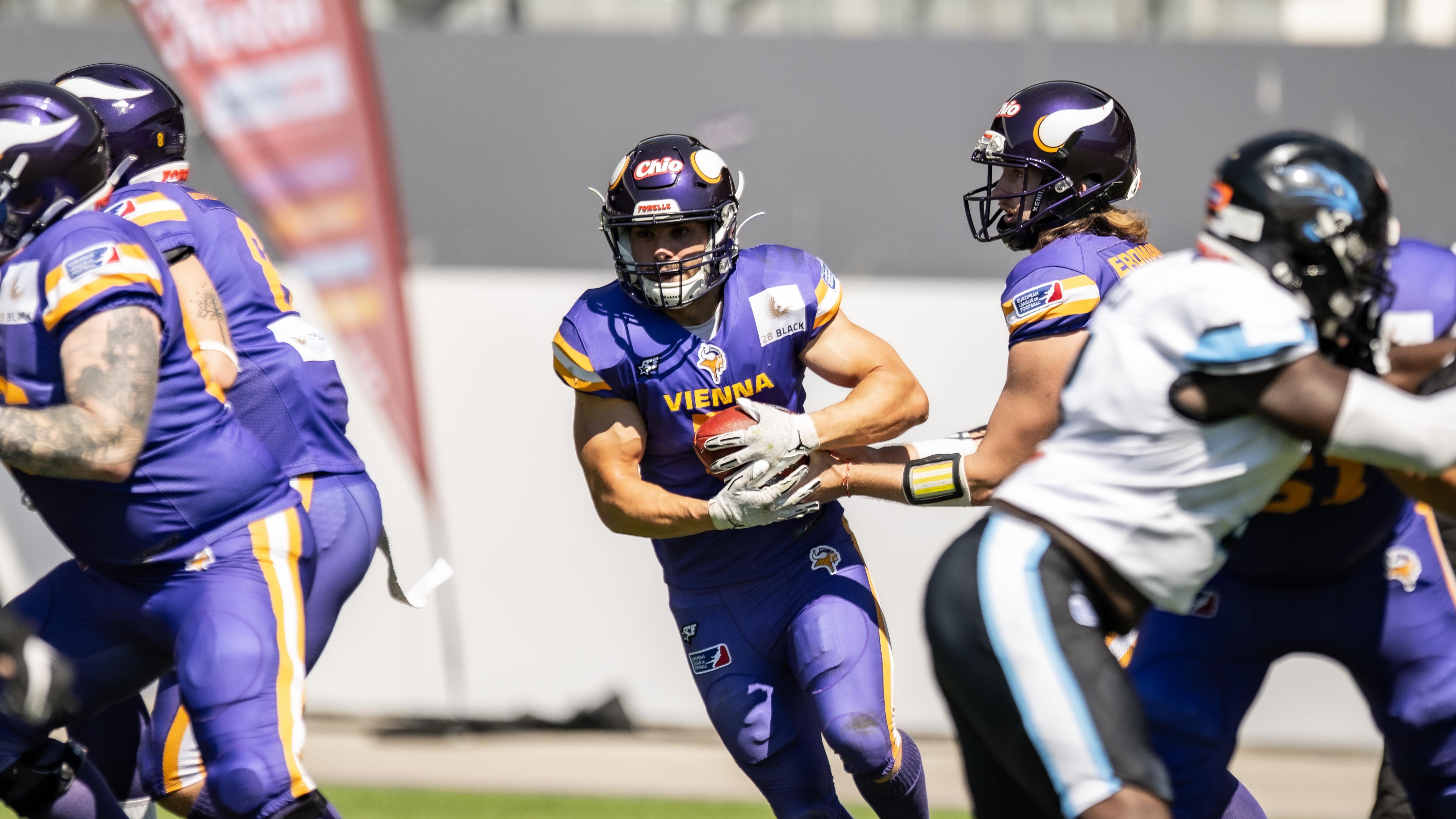 The Vienna Vikings were able to spread the ball perfectly. © Kramberger

To make a long story short: It was a small demonstration of power by the Sea Devils. After a short mistake and missed tackles that led to a Matt Adam touchdown to Nathaniell Robitaille, the Sea Devils shook themselves for a moment, then unloaded all their power into the game. There was simply no stopping the Hanseatic running game. With 185 net yards rushing and four touchdowns for Toonga and 90 yards rushing for Simon Homadi and a touchdown, the Sea Devils' order was quickly identified.

Ceesay was able to keep the Sea Devils running well with his 124 yards passing. In addition, Eric Schlomm mastered a field goal and every PAT with bravura. For Rhein Fire it was a used day. 131 yards rushing and 123 yards passing were not enough for the team from West Germany, which had a strong receiver with two touchdowns in Robitaille, but also had to concede four sacks, six tackles for loss, four forced fumbles and an interception. Not enough, if you do not show your A-game in an almost sold out Stadion Hoheluft. In the end, it was 42-15 for the hosts, who now lead the Northern Conference with a 4-1 record.

The Vienna Vikings are progressing successfully and convinced also against the Wrocław Panthers. Jackson Erdmann was too ice-cold and found four different receivers for touchdowns: Breuler, Botella Moreno, Linnainmaa and Bouah. Slade Jarman on the other side was less successful with 264 yards and two interceptions, but still a clear plan was visible by the Panthers. With nine tackles for loss, four sacks and two interceptions, the defense of the Vikings still was all over the place. The only two undefeated teams meet next week: The Vienna Vikings and the Barcelona Dragons. Panthers were defeated 30-6 and are lined up 2-3 in the Northern Conference with Thunder and Kings. Against Berlin Thunder, it could all look different.

‍
It was the expected top match between Frankurt Galaxy and Raiders Tirol. Only the Galaxy's rushing offense prevented the Frankfurt team from winning. 178 yards and two touchdowns by Sean Shelton and disciplined defensive work made the difference. For the Galaxy, Jakeb Sullivan had similar statistics with two touchdowns and 189 yards. Both offensive lines provided enough time, allowing only one sack each.

After the Galaxy signed wide receiver Reece Horn, the offense was especially strong in passing, but with Jakeb Sullivan at quarterback, the best rusher was also on the field. Another damper to go along with the 17-23 loss. The game against the Stuttgart Surge must be a must-win for the Galaxy, the Raiders in turn meet the Leipzig Kings, who arrive with two wins in the bag but look like real contenders.

‍
Despite the Surge's 22-28 loss, you can say it was a different team. After the departure of Meza and Schroeder and the restructuring in the offense, the team was unrecognizable against a strong Leipzig defense. Dante Vandeven, quarterback of the Surge, threw for 391 yards and a touchdown, found Benjamin Barnes for over 180 yards as a receiver. Only the Surge's rushing attack sputtered a bit. For Leipzig, Seantavius Jones was the outstanding factor with 143 yards and a touchdown. In the end, the creative playcalling paid off for the Kings. 257 yards passing and 121 yards rushing as well as two interceptions ensured the victory. Despite the increase, the Stuttgart Surge remains winless so far this season.