Toni Zoeller: "[The Guards are] putting together a coaching staff that has never existed before in Switzerland"

The Helvetic Guards are preparing for the upcoming season. 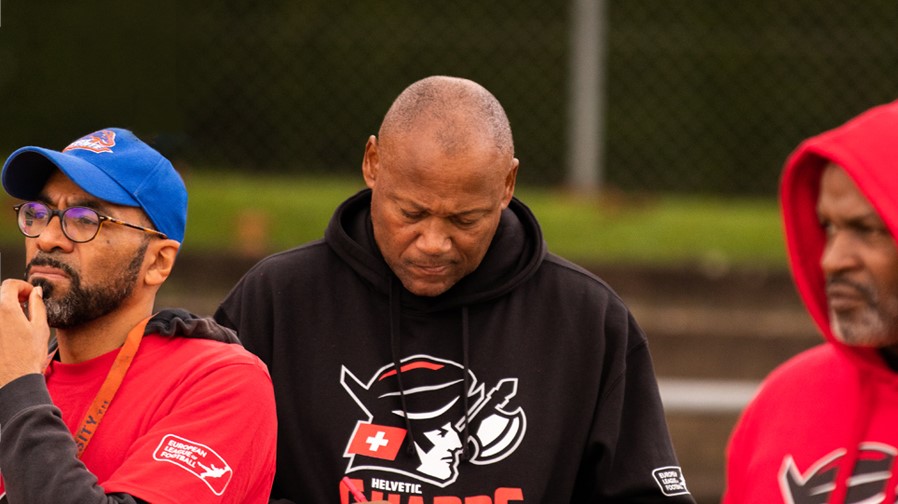 The Helvetic Guards might have the best coaching staff in the league. © Noa Monn

The European League of Football will grow to 18 teams from ten different countries in the third-ever season. The Helvetic Guards are one of these teams and have been preparing for the upcoming season for a long time. The start was made by the combine in early October in Emmen, Switzerland. With over 165 players on site, including five quarterbacks from Switzerland, Germany, France and America, the combine was a colossal success for the Guards.

In addition, nearly 30 players were invited for 1on1-meetings. So far, no further open combine is planned for the future. Final needs will have to be addressed in February, General Manager Zoeller explained.

"In scouting and contact with the players, our athletic department and coaching staff have really done a great job, and we are very confident that we will be able to field a top team next year," explained General Manager Toni Zoeller, adding, "Our goal here is to get all the best players in the country to join our team, as we have the great advantage of being the only franchise in Switzerland. One of our goals here is also to bring the top players who have played in the European League of Football or the German Football League in recent years back to Switzerland, to also show for the perspective that you can stay in your home country as a young football player and still play at the very highest level."

Support is also noticeable and it included the combine, Zoeller tells us. "We were able to take the first steps toward that at our Open House Event in July and the combine now in October, and we're already happily noticing our own fan dynamic developing and the fan base getting organized and growing steadily."

Some players who attended the combine were wide receiver Ethan Tora Kimura, from Japan, talented defensive lineman Philipp Leimgruber from Switzerland, Wesley Martheli, a defensive back who played for the Berlin Rebels or Spanish wideout Aaron David, who had stances with the UNC Crusaders or Zaragoza Hurricanes. All are hoping to be chosen to play for one of the European League of Football’s newest teams.

Coaching staff build on and for success?

Coaching staff for the future of Swiss football

"We set out, putting together a coaching staff that never existed before in Switzerland. Coaches who bring a lot of knowledge and experience, and have worked at the highest level (NFL/NCAA). We succeeded completely with the coaches around Norm Chow. When they were here, during the combine, it also showed what level the coaches are really at. An important part of our plan with the coaches is not only to have a direct influence on our players, but also to share it with the football community in Switzerland in several ways."

"In the first step, we want to achieve this by finding a local coach as a partner for each US coach, and this local can then learn as much as possible from the collaboration and later pass on this knowledge to players – in this way we want to raise the overall coaching level. In the second step, it has also been very important for us to find coaches who have the character to share their knowledge, at coaching clinics or youth camps. We have also succeeded in this, as the coaches are not only on a top level professionally, but are also incredible in terms of character. We are currently in talks with the local coaches in order to finalize the coaching staff in a timely manner. Coaching clinics and youth camps are being planned."

Head Coach Norm Chow, who was an NFL and NCAA coach for decades, was thrilled: "We saw great athletes here and got the chance to meet great people. What the players showed was extremely impressive!"

The Guards may have one of the best coaching staffs around, now trying to fill their roster withplayers to execute their ideas.