The European League of Football and ELEVEN SPORTS agree deal for the coming season! 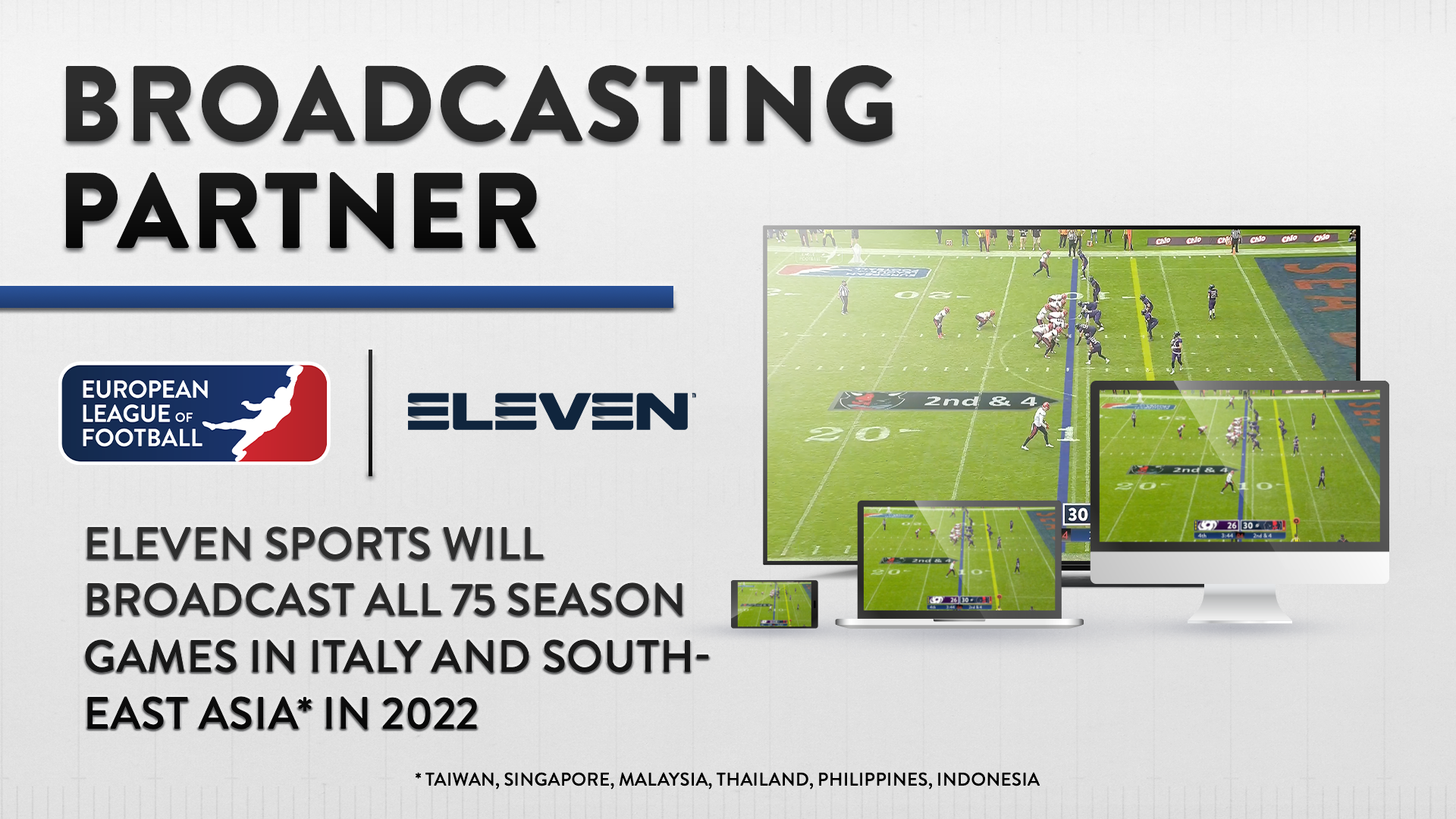 Internationalization continues! The European League of Football and ELEVEN SPORTS go hand in hand into the coming season. This means that the biggest European league will also expand to Italy, plus Taiwan, Singapore, Malaysia, Thailand, Philippines, Indonesia. All 75 games can be watched via ELEVEN's global OTT platform elevensports.com.

‍
ELEVEN SPORTS is an international provider specializing in the broadcast of sports events and lifestyle entertainment that generates over 4 billion views per month through its content and global network.

‍
The company was founded in 2015 from the intuition of Andrea Radrizzani, an Italian entrepreneur with consolidated experience in the sports and media sectors and among the first to glimpse the potential of new markets thanks to the evolution of technology applied to innovative and accessible ways of enjoying sports events.

‍
"After the collaboration with the Italian IFL, the American football season continues on Eleven Sports with the European League of Football, the top European competition that brings the most interesting talents to fields all over Europe and that, from June to September, will compete for the title of Continental Champions,” commented Giovanni Zurleni, Managing Director of Eleven Sports Italia. “We are proud to be able to satisfy with new content the growing number of fans who find on our platform the sport and the stories that excite them, thus becoming their point of reference in American Football as well.”

‍
ELEVEN SPORTS today represents not only a winning model of doing business, but also the perfect synthesis of technology, media, entertainment and sport. These characteristics connect ELEVEN SPORTS and the European League of Football.

‍
The 2021 Championship Game at the MERKUR SPIEL Arena in Düsseldorf, shortly after the loosening of the Corona measures, was attended by 21,000 spectators. The final of the imminent 2022 season will take place on September 25th at Wörthersee Stadium in Klagenfurt, Austria. More than 4,000 tickets have already been sold in advance for the season highlight.

‍
Meanwhile, the European League of Football is continuing to expand: three further franchises have already been confirmed for the 2023 season: the Helvetic Guards from Zurich (Switzerland), the Milano Seamen (Italy) and the Hungarian Enthroners from Székesfehérvár/Budapest (Hungary). At least one more team will be announced in the coming weeks.

‍
The Game Pass of the European League of Football is available here:
https://europeanleague.football/game-pass#/

All-Star signs with the Milano Seamen