The Frankfurt Galaxy (9-1) are the first ever European League of Football Champions! 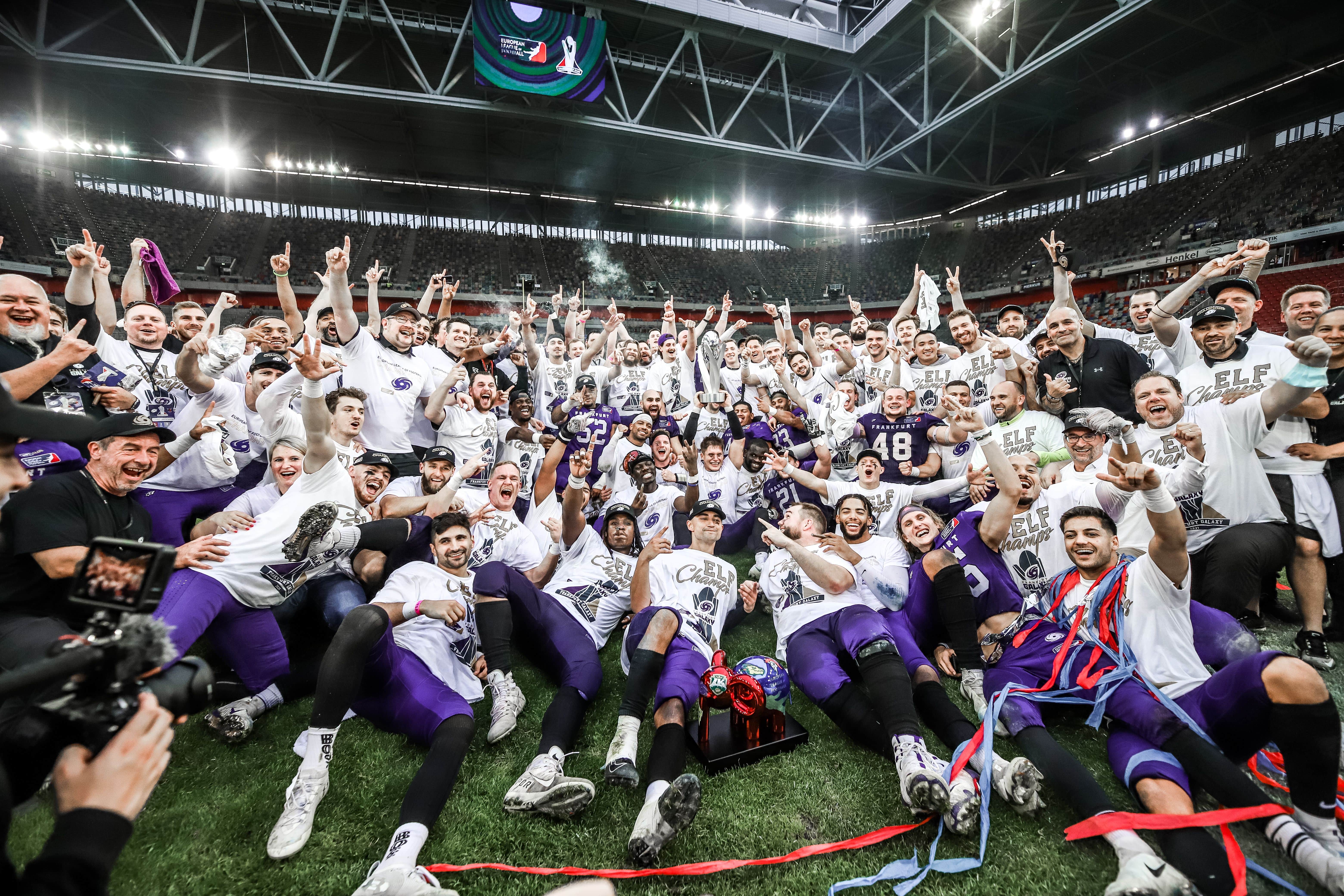 The first European League of Championship Game is in the books. With over 20.000 fans in attendance and a tailgaiting event before kick-off, the final game of the season marked an unbelievable end to a great inaugural season of the European League of Football.

The Hamburg Sea Devils and the Frankfurt Galaxy faced off in the first ever Championship Game of the European League of Football. The game kicked off under great weather circumstances and an electrifying atmosphere.

The Galaxy started the game on offense after the Sea Devils kicked off the game. After a run by Sullivan for three yards, the Galaxy faced a long second down. However, Sullivan completed a pass for over 15 yards to his wide receiver Marvin Rutsch. A few plays later, Sullivan converted a third down to his receiver Rutsch. After a holding call against the offensive line and an incomplete pass, the Galaxy faced a long third down. But dual-threat quarterback Sullivan was just able to get the first down. After a few plays, the Galaxy could not convert on fourth down and turned over the ball on fourth down at the Sea Devils 26-yard line.

On the first play from scrimmage, Clark connected a quick pass to wide receiver Tobias Nill. After running back Xavier Johnson got the first down on a short run, Clark found his favorite target Adria Botella Moreno for a huge gain. At the Galaxy 29-yard line, linebacker Sebastian Silva Gomez was injured on an attempted tackle. Fortunately for the Galaxy, he was able to leave the field under his own power. Three plays later, the Sea Devils found themselves at the Galaxy two-yard line. After a short gain by Johnson, Galaxy Head Coach Kösling challenged the ruling on the play. The referees called Johnson down by contact before he lost possession of the ball, this call stood as called and the Galaxy lost a timeout by rule. One play later, Jadrian kept the ball and ran into the endzone for the first score of the game. After the PAT was good by All-Star kicker Phillip Friis Andersen, the score stood at 0-7 with the Sea Devils on top.

With just over one minute remaining in the first quarter, the Galaxy took over on offense but were forced to go three-and-out by a stiff Sea Devils defense.

After a great punt return by All-Star Justin Rogers, the Sea Devils were back on offense just before the end of the first quarter.

The very first play in the second quarter was a great pass to wide-open running back Johnson who advanced the ball all the way to the seven-yard line. However, a delay-of-game penalty and a false start pushed the Sea Devils offense back to the 17-yard line. Still in the red zone, Clark fired a pass to his wide receiver Benjamin Mau while rolling out to the right. As that pass went incomplete, the Sea Devils had to settle for a field goal attempt which was good. This brought the score to 0-10 with the Sea Devils on top.

After three plays on offense, the Galaxy offense was forced to leave the field again. However, Sea Devils returner Rogers was stopped after only gaining minimal yardage. The Sea Devils moved the chains again before Galaxy defensive back Benjamin Barnes broke up a pass to force a long second down. One play later, the Sea Devils were forced to punt the ball for the first time in the game.

The Galaxy took over on offense with just over nine minutes remaining in the second quarter. After a few plays, the Galaxy converted on third down with a pass to running back Gennadiy Adams who broke one tackle and outran the rest of the Sea Devils defense for Frankfurt’s first score. After the two-point attempt was not successful, the Galaxy were still trailing by four points with the score at 6-10.

After a few plays on offense, the Sea Devils faced a critical third down with over four minutes remaining in the first half. Clark fired a pass over the middle that got deflected and picked off by linebacker Jhonattan Silva Gomez.

In the red zone, the Galaxy took advantage of the turnover and scored their second touchdown of the game. On a critical third down, Sullivan found his wide receiver Nico Strahmann over the middle for the touchdown. The following two-point conversion ended up being unsuccessful. This set the score at 10-12 with the Galaxy on top for the first time in this game.

The Sea Devils took over on offense with a few minutes left on the clock. They moved the ball with sharp passes by quarterback Clark. After the two-minute warning, the Sea Devils marched down the field. Clark fired a deep pass to tall wide receiver Madin-Cerezo who came down with the 50/50 ball in the endzone. Although cornerback Omari Williams had the ball in his hands, Madin-Cerezo just took it out of his hands and scored Hamburg’s second touchdown. With the PAT being good, the Sea Devils were back on top with the score at 12-17.

The Galaxy had one more shot in the second quarter with just over one minute remaining. After a penalty against the Sea Devils, the Galaxy drive was still alive. Just two plays later, Sullivan fired a pass deep to his favorite target Anthony Mahoungou. The former NFL player hauled in the deep pass which set up Frankfurt in the red zone. A few moments later, Sullivan found Mahoungou wide open in the endzone for a touchdown. After a successful two-point attempt on a pass to Gennadiy Adams, the Galaxy were on top again with the score at 20-17.

After an attempted onside kick by the Galaxy, an eventful first halftime of the European League of Champion.

During the halftime, the three new franchises of the European League of Football were introduced by Commissioner Patrick Esume and moderator Jennifer Becks.

First up were the Vienna Vikings, then the SWARCO Raiders. Finally, the Düsseldorf Rhein Fire were welcomed back with loud cheers of “fire” at the MERKUR-SPIEL-ARENA. Right after, word-class DJs ESKEI83 and Rafik were igniting a fire with their music during the halftime show.

After both teams came back out on the field, the Sea Devils were starting the second half with a trick-play. However, the Galaxy defense held up and even came close to intercepting the attempted pass by Clark close to the right sideline. After converting a critical third down, the Sea Devils running game got up to speed with a great run by Johnson. During the play, offensive lineman Dominik Kenzler was injured but was able to walk of the field under his own power. After a few great plays, the Sea Devils were in the red zone. After two offsetting penalties, the Sea Devils ran the ball with Johnson. A few plays later, Clark kept the ball and scored his second rushing touchdown of the game. After the PAT was good, the new score stood at 20-24 with the Sea Devils on top once again.

The Galaxy were forced to punt the ball after going three-and-out once again. The Sea Devils forced a great pass-breakup on third down to force the punt.

The Galaxy were back on offense but struggled to move the ball. A strong Sea Devils defense forced Frankfurt to punt the ball once again.

Close to the end of the third quarter, the Sea Devils started their next drive on offense.

At the beginning of the fourth quarter, the Sea Devils’ offense was moving once again. After moving into Galaxy territory, the Sea Devils had to settle for a field goal attempt which was good (again). This brought the score up to 20-30 with the Sea Devils now leading in a two-possession game.

The Galaxy were back on offense and were able to move the ball. After a great run by Sullivan to pick up a first down, the Galaxy moved into the red zone. On second-and-goal, Sullivan found his tight end Kevin Mwamba for a touchdown on the left side. After an unsuccessful two-point attempt, the Sea Devils were still up by four points with 5:48 minutes remaining in regulation.

Hamburg came out hot on their next possession with a long pass to tight end Botella Moreno. One play later, Johnson had a great run which set up the Sea Devils in the red zone. A few plays later, Clark kept the ball on third down. However, an offensive lineman was disqualified from the game which set up the acquired first down at the 21-yard line. After a few more play, the Galaxy defense forced the Sea Devils to settle for a field goal attempt. Surprisingly, Sea Devils kicker missed the field goal wide left which kept the score at 30-26.

With under two minutes remaining in regulation, the Galaxy moved down the field with great passes by quarterback Sullivan. On one play, Sullivan found Regler close to the right sideline. One moment later, Sullivan found Regler again who was down at the one-yard line after making a huge catch! On the next play, Sullivan kept the ball and ran into the endzone for the score. The two-point attempt was intercepted and therefore no good. This gave the lead to the Galaxy with the score

The Sea Devils got the ball back with under 30 seconds on the clock. After moving the chains once, Andersen attempted a field goal which ended up being no good. However, Galaxy Head Coach iced Andersen which gave him one more try. But Andersen`s kick ended up being short.

The Frankfurt Galaxy won the first ever European League of Football Championship Game with a final score of 32-30 against the Hamburg Sea Devils.