The Playmaker for the Leipzig Kings: Alpha Jalloh 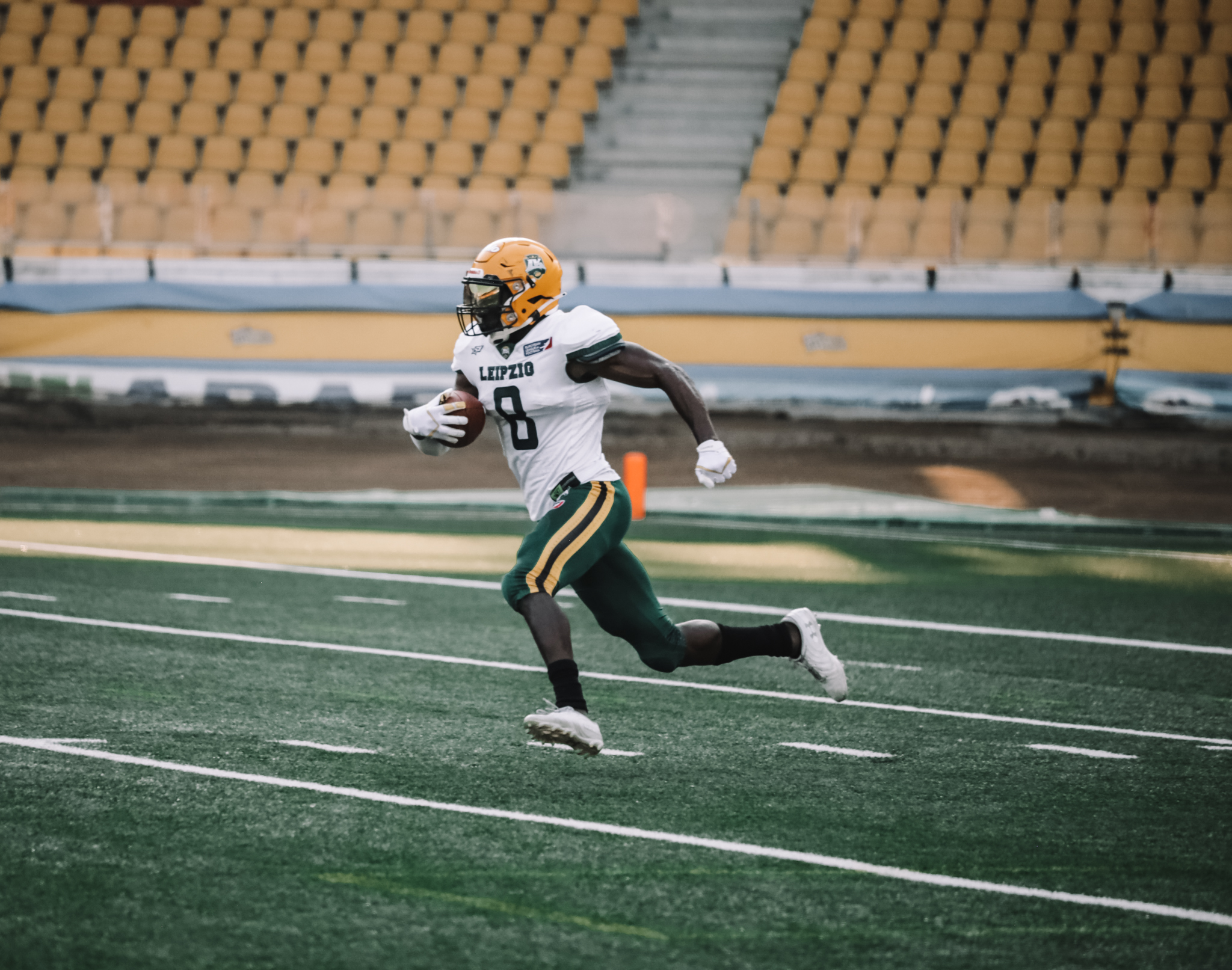 The Leipzig Kings have one of the most dangerous playmakers in the European League of Football on their roster: Alpha Jalloh. In his last game against the Stuttgart Surge, he caught a touchdown on offense, had a pick-six on defense and scored on a kick-off return on special teams. We asked Jalloh what he thinks of his game against the Stuttgart Surge on Sunday. He pointed out that he loves to be recognized as a playmaker: “I want to score on all three phases of the game; special teams, offense and defense. I love being a playmaker so that’s always my goal for the team. And I like having that personality by myself that I could be a playmaker, like ‘that guy is dangerous’. I love having that because I believe I work hard for it.” When asked about his three kick-off return touchdowns so far, Jalloh pointed out that a Centurions player also scored on a kick-off return last Sunday: “[Quinten] Pounds also scored a kick-off return touchdown and he looked extremely quick. So, congrats to him!”.

After the tough loss in Stuttgart last Sunday, Jalloh also told us that the Leipzig Kings are not giving up and still try to win: „We came into the game extremely hot. We scored on our opening drive which we always want to do on offense. Then, their team didn’t score on the opening drive because we got a pick-six which is a great thing for us. Emotions were high because we felt this was a must-win game for us to fight for second place and to put us into position to fight for first place. Honestly, we don’t feel like it’s over. […] We want to compete. That’s really what it is. For me, I’m a competitor and I hate to lose. So, after the game I’m disappointed, but you got to wipe it off and move forward to the next”.

According to Leipzig Kings’ Jalloh, their team has a special mindset after loosing to the Stuttgart Surge in a close game and touches on their next opponent: “We did not think we should have lost that game. We didn’t think that this should have been such a close competition. However, when you slightly overlook a team and not prepare the way we’re supposed to for the opponent than this can happen. Any team in this league can lose to any team. And I would say that for the next opponent as well: I do believe that we can beat Hamburg. If we play healthy […] and stick to our gameplan then we can beat Hamburg and it won’t even be a surprise for us. Because we believe that we are a top team as well. So, we’ll see what it will be like against Hamburg […]. I believe that we can pull this upset off.” The 1-3 Leipzig Kings will face the 3-0 Hamburg Sea Devils for the first time this Sunday. It will be an interesting matchup between the two conference rivals, so tune in on your Game Pass at 3 p.m. CEST this Sunday to see Jalloh and the Leipzig Kings host the Hamburg Sea Devils at home.