Banat: “[The] only goal is to bring the championship to Wrocław” 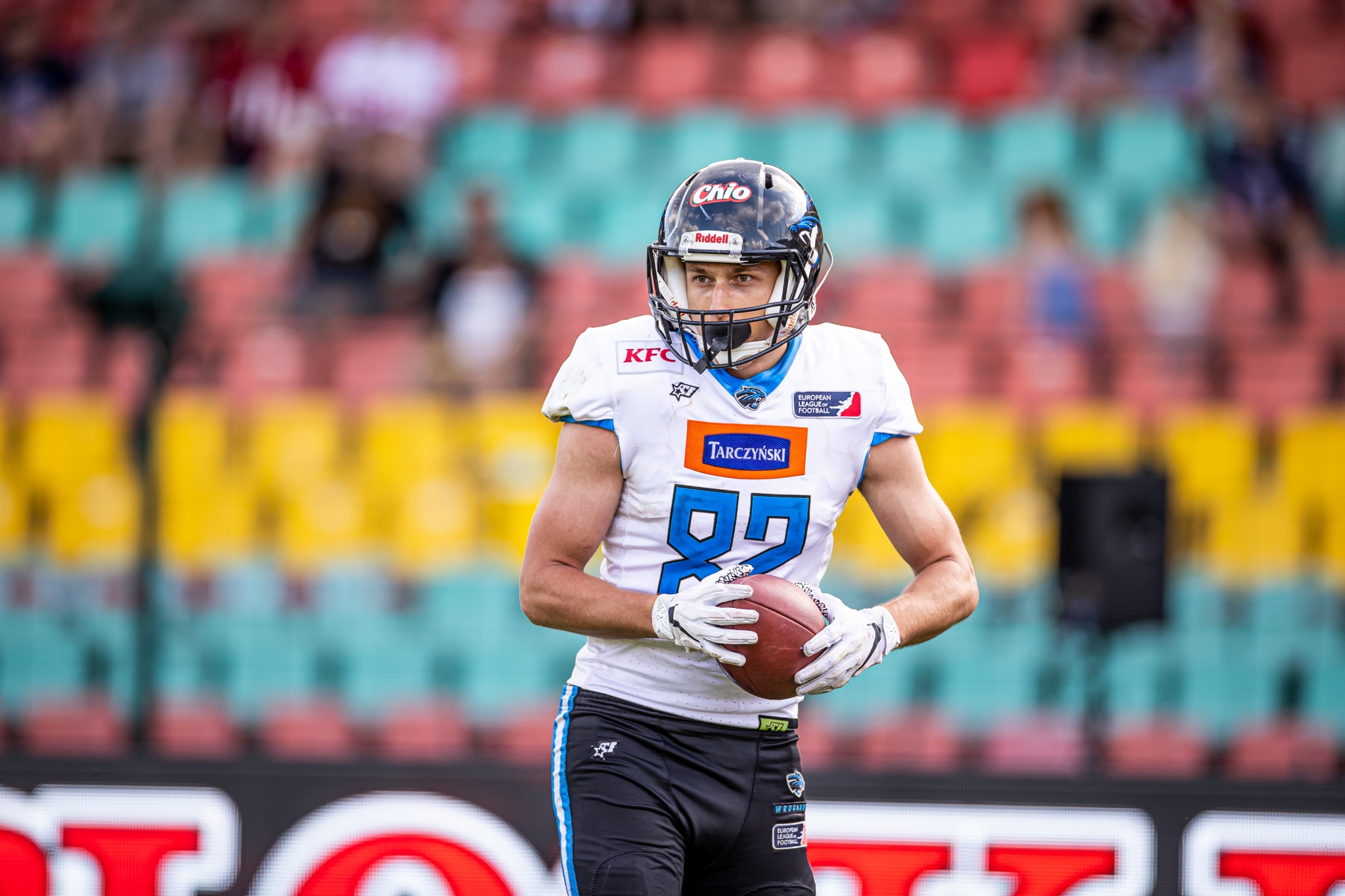 The 3-1 Wrocław Panthers won their last game against the 1-3 Berlin Thunder this Sunday after a great performance on offense, defense, and on special teams. Two weeks prior, the Panthers lost against a strong interconference opponent in Frankfurt. However, the Polish franchise was able to bounce back and currently sits at second place in the Conference North.

A few days after their third win of the season, we talked to Panthers wide receiver Przemek Banat about his incredible performance in Berlin. Banat feels relieved after bouncing back with a win: “It always feels good to bounce back after loss. There are no easy games in the league, but I think we had the game under control in all four quarters. We went to Berlin well prepared thanks to our coaches. This time we made fewer mistakes than two weeks ago but there were still some errors we have to avoid, especially in close games”.

The Polish wide receiver also commented on his two touchdowns catches and over 100 receiving yards on Sunday: “It doesn't happen every game but that's just how it is to play receiver. In some games you could feel great but have no opportunities to catch and sometimes the ball just finds you and all you have to do is get where you're supposed to be and catch it. What makes it easier is playing in [a] well led offensive system with [a] great receiver core where everyone is capable of making big plays and be "the man" when [the] team needs us to move the chains or score. That being said, the defense can't focus on just one or two players and it's just easier for everybody on our offense to move the ball”. We also talked to Wrocław Panthers’ General Manager Kuba Głogowski, who told us that Banat is a wide receiver that steps up when the team needs it most: “We often call Przemek [Banat] ‘the best hands in Poland’. He is this type of receiver who might not play spectacular the whole game, but when you need him, he will be there and make it happen. At the same time, he is probably the most down-to-earth WR you can imagine. If you see him fired up at a game, that means the other team is really in trouble”.

Of course, the 4-0 Hamburg Sea Devils coming to town this Saturday was also a topic we talked about. Banat explained that the Panthers are locked in and focused to beat their conference rival: “We all know that we have to play better than we did [the] last two games to win this one. The Sea Devils proved that they're a team that can take advantage of other teams’ mistakes. Our coaching staff pointed out and corrected our mistakes on gameplan meetings and field practices. We are confident and even more motivated as [the] Sea Devils are our biggest division rival and they're still undefeated. After the first practice of this week, I can say that thanks to our defense we picked up the tempo and intensity. The atmosphere is great, and everyone is locked in”. It remains to be seen if the 3-1 Panthers are capable of handing the 4-0 Hamburg Sea Devils their first loss this Saturday at 3 p.m. CEST, but Banat and his team are locked in and have only one goal in mind: “[The] only goal is to bring the championship to Wrocław. I don't look too far in the future, but I feel great with [the] Panthers team and organization”.