Pasqualini about clinching a playoff spot: “Honestly, it’s a relief” 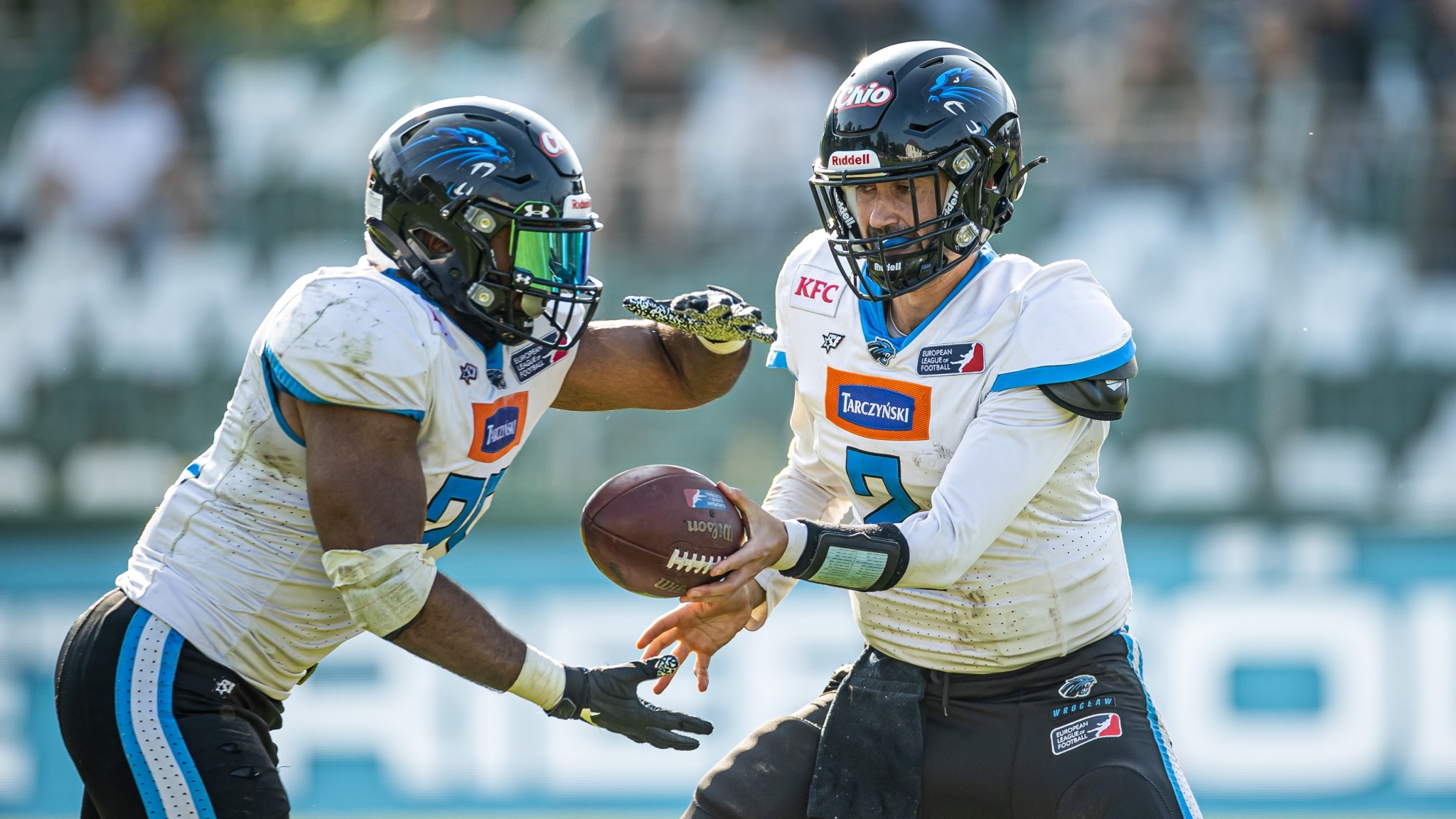 Panthers QB O'Connor handing the ball off to RB Pasqualini against the Kings in week twelve. Credit: Łukasz Skwiot

The Wrocław Panthers have one of the most productive running backs in the league: Philéas Pasqualini. The Frenchman has a long history with American Football playing at the McGill University in Canada for three years before he took part in the 2020 CFL Global Combine in Paris.

Before the 2021 season, Pasqualini signed with the Panthers that clinched the last available playoff spot in a win over the Leipzig Kings last Sunday. In that game, Pasqualini rushed for 114 yards and two touchdowns on 23 carries.

Pasqualini is relived and excited about the win against the Leipzig Kings last Sunday: “Honestly, it’s a relief. We were able to pull ourselves together and focus again after a few losses to take this final playoff spot. But we already focus on the upcoming game”, Panthers rushing leader commented.

When asked what he thinks about his two-touchdown performance against the Kings last Sunday, Pasqualini quickly referred to his teammates: “I’m thankful because if I’m able to do it, it’s because of my teammates. And it’s never enough, it’s the kind of mentality I have, I will do my best to help my team”.

“This Sunday, the fans can expect a very tough game, for sure. Both teams want that spot in the final and both teams will give everything for that, believe that. It will be a very physical game”, Pasqualini explained. The 5’10” running back will do his best to help his team to move on to the first ever Bowl Game in Düsseldorf on 26th September.

The Panthers have a deep roster with a lot of talented players. In our interview, Pasqualini commented on the Panthers roster and his teammates: “Honestly, all my teammates ‘bring their stone to the building’. They are all useful to the team, each one of them. But some players are playmakers, it's undeniable. Like on offense, Lukas [O’Connor], [Przemyslaw] Banat, [Jakub] Mazan, and [KaVontae] Turpin. On defense, Goran [Zec], Darius [Robinson], Hubert [Ogrodowczyk], William Lloyd, James Williams , Pierre [Courageux]. And honestly, I could add more names. Many guys in this team are underestimated or unknown”.

The 7-3 Hamburg Sea Devils lost a few games at the end of the season. They rested a lot of starters in week ten of the regular season when they lost to the Panthers with a score of 24-30. However, Pasqualini cannot speak highly enough of the Panthers’ opponent this upcoming Sunday: “I think they are a very strong team, especially their defense. We faced them two times already, we know the qualities and weaknesses of each other. Each time it’s a challenge for us to play them but we are built for this kind of challenge and this kind of game”.

It remains to be seen who comes out on top after Sunday’s matchup between the Panthers and the Sea Devils. Nevertheless, Pasqualini is excited and cannot wait for the playoffs: “I’m very excited about these upcoming playoff games. They will be tough and competitive games, for sure”.