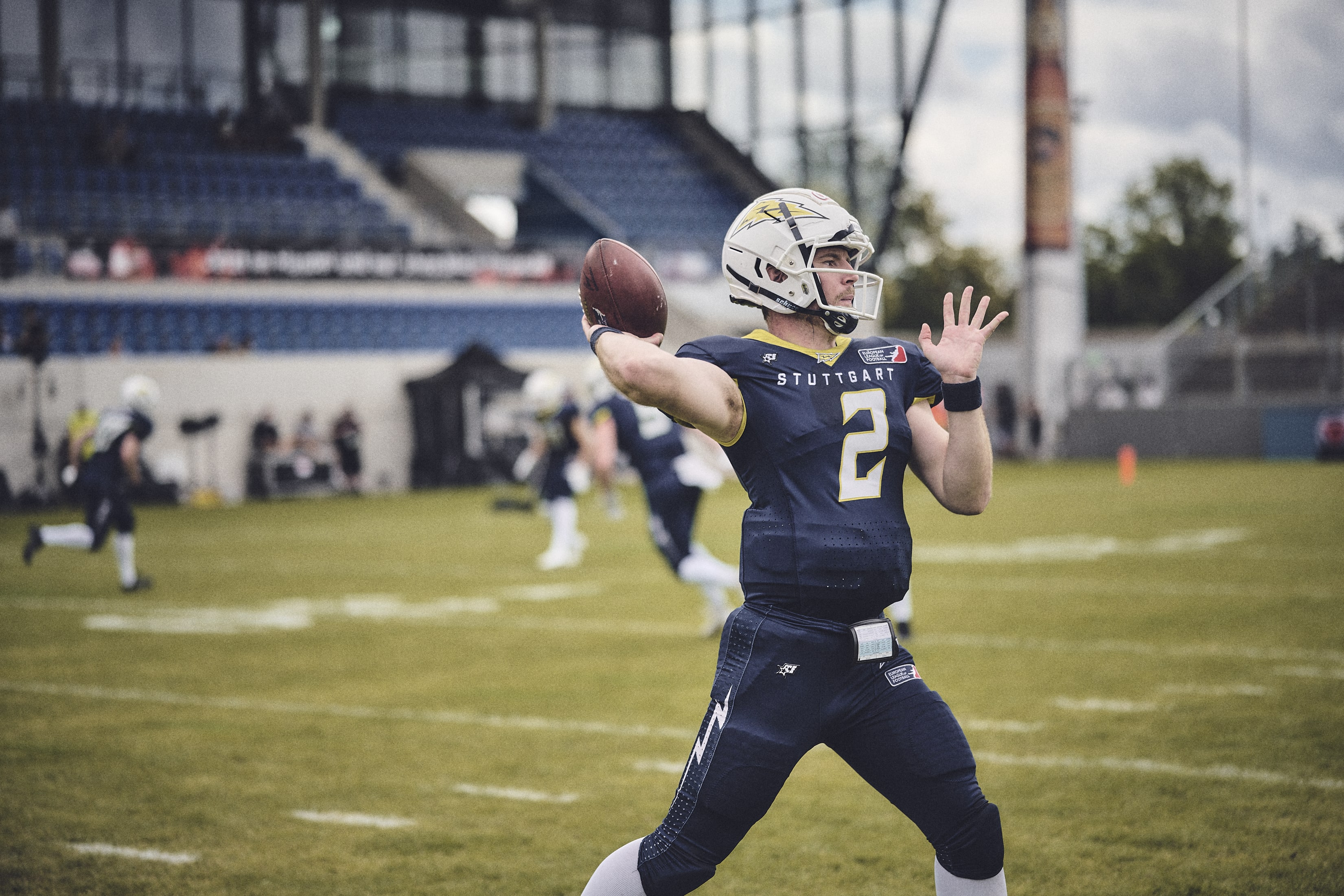 The 2-2 Stuttgart Surge won a close game against the 1-3 Leipzig Kings on Sunday that was decided on the last offensive drive by the Surge. Aaron Ellis threw a perfect pass to his tight end David Meza to put the Surge on top 25-24 with only 64 seconds left in regulation. Quarterback Ellis was excited after winning his first game with the Surge, but he was not happy with his early interception: „It was one hell of a rollercoaster, man! You know, as aquarterback, throwing an interception sucks. […] It hurt for sure, but my teammates did an amazing job at keeping me up, having my back and keep me in the game”. After throwing an early pick-six to Kings defensive back Alpha Jalloh, Ellis had a great game and led the Stuttgart Surge to their first victory at home.

After trailing the Kings, Ellis stated that the offense found some rhythm and gained some confidence over time: “Going through the game we started to get into a rhythm of: ‘okay, we can hang with these guys. As long as we don’t make more mistakes like that we can win this game’. Everyone believed that after we scored our first touchdown. We were like ‘hey, we can beat these guys’. And we did what we always said we’re going to do; we fought, and we fought until the last second on that clock. I’m very proud of the guys for their attitude and their work ethic and just never giving up”. Surge quarterback Ellis put great emphasis on the team effort and how everybody shared this special moment of winning the game with just one minute left on the clock: “To be able to come together and get a win in the last minute of the fourth quarter it really was such a special moment to share with all of our fans”.

The game-winning touchdown of the game would not have been possible without tight end David Meza catching the ball and hurdling over two defenders to take the ball into the endzone. Quarterback Aaron Ellis also commented on having Meza at tight end and what it means for the offense: “I trust all of our guys out there but for me ‘Dave’ [David Meza] is an experienced guy, he is a veteran guy, he’s a great leader, he’s a great friend, and he’s a great teammate. [...] Just being able to have him and knowing that he’s got my back no matter what’s going on. After I threw that pick-six, he didn’t care at all. He told me: ‘Hey bro, just forget about it. We got this’. […] When you get a guy like that with a group of young players, it’s one of the most beneficial things you can have on an offense”.

When we talked with Ellis, he could not leave out the fans and the great atmosphere at the Gazi Stadion in Stuttgart. “That energy was ridiculous. I came from a smaller college, so we never really had anything like that. […] It was just amazing how they rallied behind us. Things weren’t going well in the beginning, but they never backed down. They kept us positive. When we needed them they were cheering their heads off. And it affected their offense, having to drive down the field when they can’t hear anything. Everyone was just so loud and it really was just an amazing moment”. When asked how the Stuttgart Surge is approaching the next weeks, Ellis had a simple answer: “[…] My thing is and it will always be: we’re going to improve week by week, practice by practice and we’re going to fight. We’re going to fight every game, every inch. Everything we get we are going to fight for it and earn it. And I think that if we just keep that same mentality [...], we’re definitely getting some more wins on that win column.”