Armstrong: “He’s just a winner. Michael [Birdsong] has an edge to him” 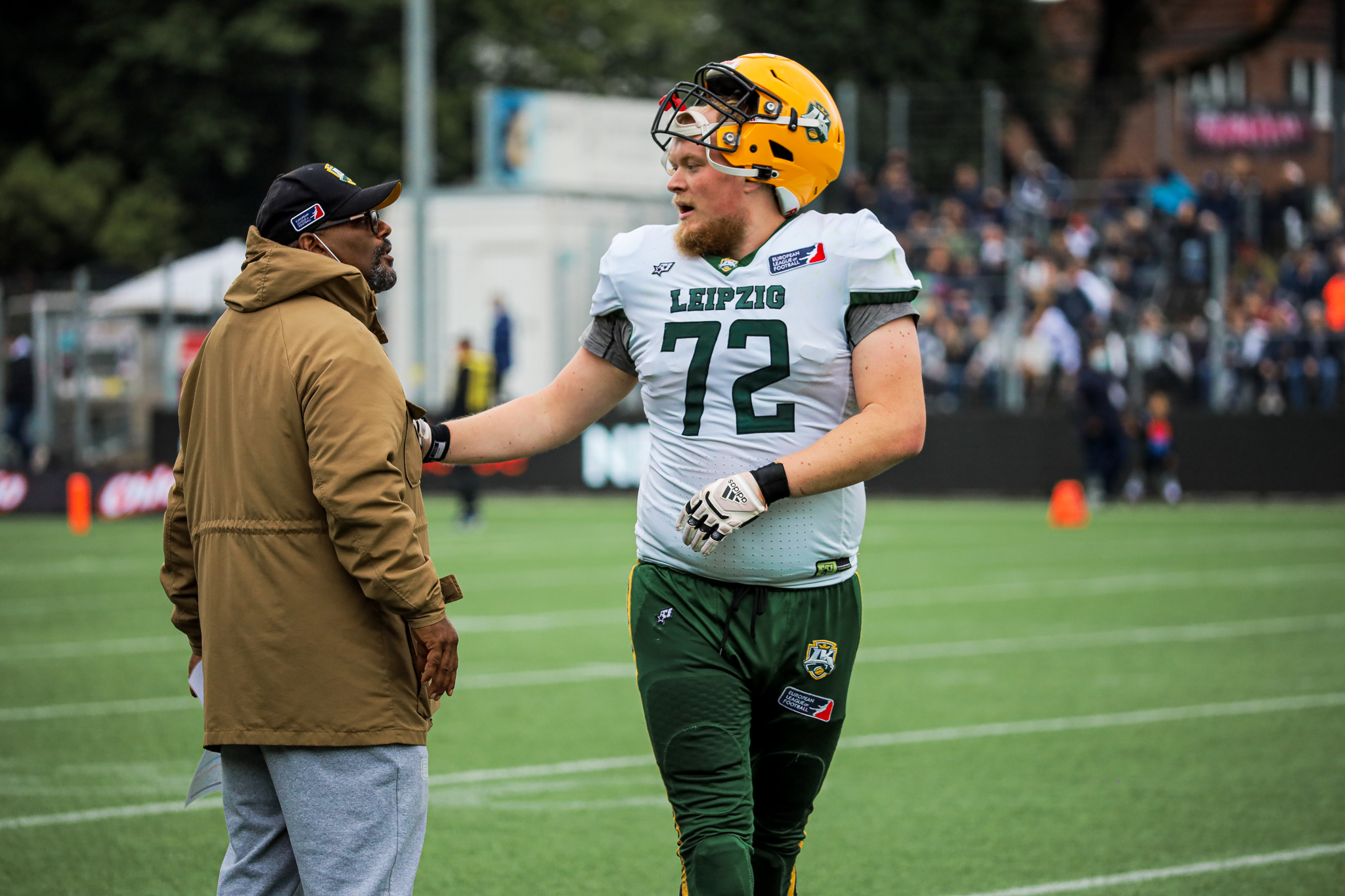 After trailing by 17 points at half time, the 5-4 Leipzig Kings came back into the game against their conference rival in Hamburg to keep their hopes for the playoffs alive. With a standout performance by Kings quarterback Michael Birdsong and the entire team, the Saxons came away with a 18-17 win over the leading team in the North Conference.

One Step Closer to the Playoffs

We asked Kings Head Coach Fred Armstrong how he viewed the game on Sunday: “Number one what you were worried about was special teams. Look, the guy [Sea Devils kicker Andersen] kicked the ball 59 yards for a field goal. So, luckily for us he didn’t punt well. You know, and even though Alpha [Jalloh] got returns of five or seven yards, we didn’t get that boomer punt which would have made us go 80 [yards] or 70 [yards]”.

Armstrong also mentioned their running back position: “The other part was that we knew didn’t have Jason Aguemon. So, we went with our boy Jaleel Awini at running back. You know, Jaleel [Awini] is a great athlete. He can play anywhere. If I need him to play defense, he could play defense. Him and Alpha [Jalloh], let’s just face it, they are the best athletes on my team. […] And they can play anywhere on that football field that you need them to play. […]”. Both Awini and Jalloh played at multiple positions for the Kings this season including quarterback, wide receiver, safety, cornerback, running back, and returner.

Despite having many talented and athletic players on his team, Armstrong touched upon the value of a balanced offense to control the game: “So, this was a big thing for us. We wanted to run the ball. We’re getting more balanced now. And I think that’s what makes us tough right now is that we got good balance offensively. That was the game plan. We didn’t need to go out and try to be a 45, 42-point team. We needed to control the game and I think we did that”.

Climbing Out of a Hole

Although the 5-4 Kings are in a good position to make the playoffs after beating the Sea Devils on the road, Armstrong and his team faced a lot of adversity throughout the season: “I think what we’ve done from the second half of the season, we had the mentality that every game was a playoff game because we dug ourselves a hole. You know, you’re 1-4, you got a young organization, you’ve just put a team together. I mean, we’ve been together now counting this week for 15 weeks as a full organization”.

According to Head Coach Armstrong, one of the bright spots was getting his quarterback Michael Birdsong back behind center: “[…] The momentum started to move forward and getting my quarterback back was really important. You know, as Jaleel Awini played great in between, those are games that went by you, and you just didn’t realize it. You know, they hurt you because you found out as this league moves on that they were important. So, the Hamburg [Sea Devils] game for us was like our wild-card game. If we don’t do this one, we won’t have a realistic shot. I’d rather be playing Wrocław where I only need to win by one point instead of trying to get 27 points”, Armstrong said with a laugh.

The Advantage of a Veteran Quarterback

In our interview, Kings Head Coach Armstrong explained how his offense works with quarterback Michael Birdsong behind center: “Michael [Birdsong] is a great leader, number one. Number two, myself being an offensive coordinator and when I took the team, I basically was ready to call and do all the offense myself. After speaking with Michael [Birdsong] and his philosophy, we didn’t have much time. You know, you have to make a coaching decision: 'am I going to try to jam what I want done into this veteran quarterback or let this veteran quarterback have the looks that he already seesand the reads he already knows?' […] And after speaking with Michael [Birdsong], I gave him those keys. And that’s how we work. We installed what he likes. And now, he lets me sprinkle some of my dust on him”.

When asked who stood out to Kings Head Coach Armstrong in the win against the Sea Devils, he started to list a number of players and coaches: “[Timothy] Knuettel has just been the most consistent thing happening for us. You know, Timothy [Knuettel] is a gameday guy. You know, he practices hard, he does. But at gameday, this guy shows up every week”.

Armstrong also touched upon the value of tight end Anton Doroshev in the running and passing game. He also mentioned Running Backs Coach David McCants as an important piece of the coaching staff as he brings the balance to the offense with his running backs. Offensively, Armstrong was excited to have his receiver Yoshihito Omi back on the field as well: “Getting [Yoshihito] Omi back was important. [Yoshihito] Omi’s played only two full games since he’s been here because of the injuries. […] Hey, I got weapons, but you’re not able to use them when they can’t play”, the Armstrong admitted with a laugh. He also added that Defensive Coordinator Joe Bommarito and Malik Jackson are important to the defense and its “turnaround” as well.

Be ready for the next matchup for the 5-4 Kings against the 5-4 Wrocław Panthers at home on Sunday at 3p.m. CEST. Whoever wins this matchup will clinch the last playoff spot in the North Conference of the European League of Football.