Tadhg Leader: From Playing Professional Rugby to Becoming a Panther

“I kicked my first ever field goal in Lucas Oil Stadium on national television”. 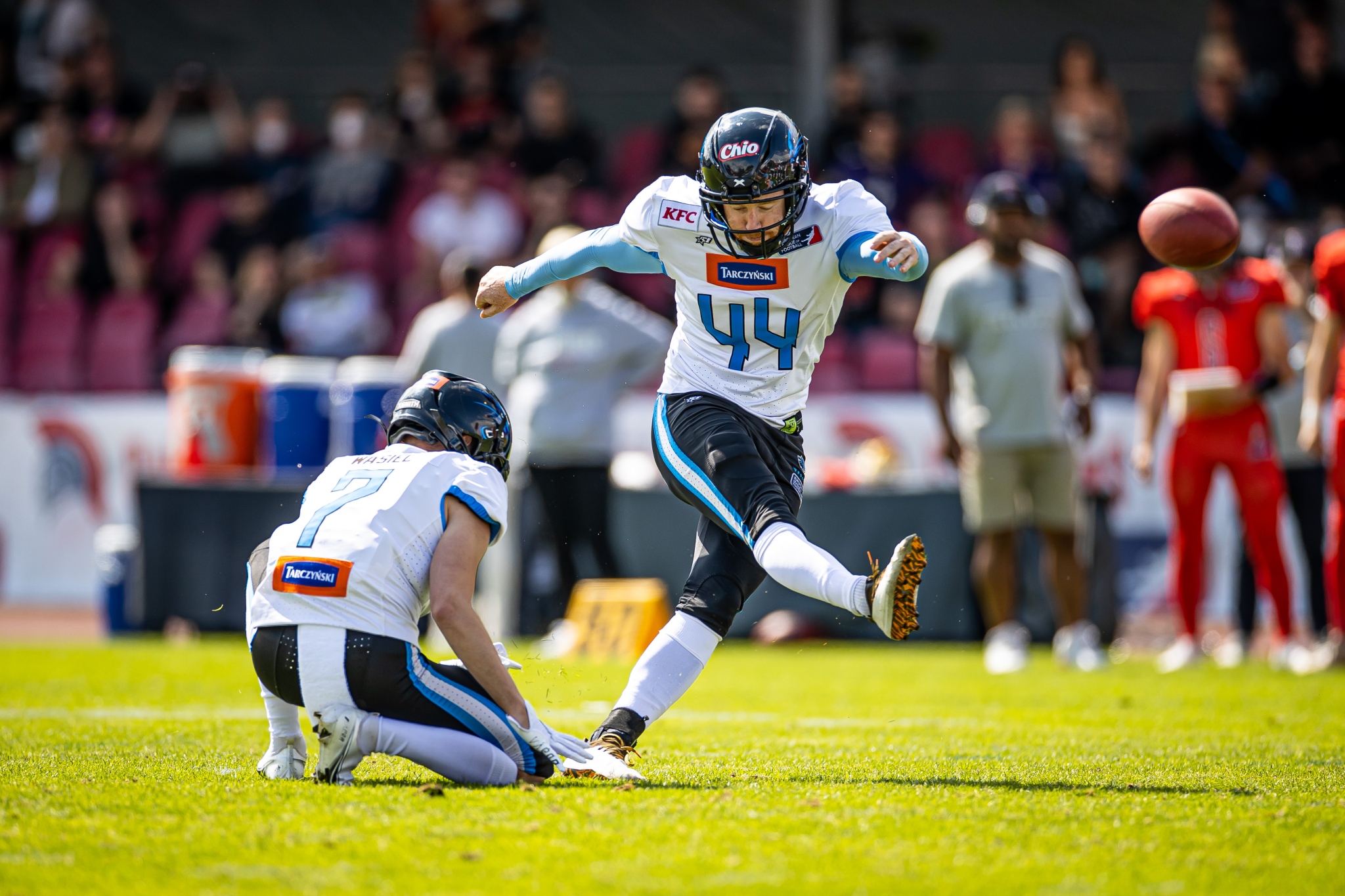 The former professional rugby player Tadhg Leader was recently signed by the Wrocław Panthers to be their punter and kicker. The Irishman already played against the Cologne Centurions on Sunday and converted his first field goal in the European League of Football: “I kicked a 43-yard field goal at the weekend and that’s already the longest field goal our team has gotten all season”, Leader told us in an interview. He jokingly added: “And I want to kick longer than 43 yards this season”.

Tadhg Leader grew up in Ireland where he came in contact with American Flag Football, but mainly focused on more traditional Irish sports early in his career: “Growing up in Galway City, in Ireland, rugby is the only professional sport in my hometown. So, it is a huge sport. But growing up I played Hurling, Gaelic Football, Rugby, and I even came across [...] American Football as a young kid in Galway. And I saw that and would play it once or twice with my brothers. But Rugby was the main sport”. Leader went on to play professional rugby for the team in his hometown and signed with a professional rugby team in Italy a few years after.

In 2015, Leader moved to the United States to study and to play in the Major League Rugby for the San Diego Legion and the New England Free Jacks. But he only came in contact with American Football several years later: “When I moved to America […], people always told me to kick American footballs. But I never did because my rugby career was going really well. […] But when COVID-19 hit, obviously everything stopped. So, it was at that point one day, just for fun, I went to kick some American footballs”.

When he tried to kick his first ever field goals, Leader did not know what to expect: “The first day, I was able to kick like 55-yard field goals. And I was just kicking the ball very clean. […] One of the guys that was with me was a high school football coach and he was like ‘Wow, that’s really good’. And I just shrugged my shoulders and was like ‘Sure. Whatever’. I just didn’t know what my standard was!”. Leader explained how he realized that his ability to kick field goals is something special: “As I was kicking, people walking around the field stopped and watched me kicking. […] You know, when multiple people came over and started watching, I started to think ‘Oh, maybe this is pretty good’”.

The begin of a journey

After long hours of studying other kickers onYouTube, Leader booked a training session with a professional coach for kickers in Connecticut, USA. That coach recommended Leader to train with two-time Pro Bowler and Super Bowl Champion John Carney. Leader moved out to Carney’s training facility in San Diego to train with active NFL-players for about ten days: “I moved out there to jump in with the NFL-level guys”. The Irishman explained why he decided to train with Carney: “I just needed to find out an answer because everyone was telling me I was quite good”. According to Leader, John Carney explained to him that he was astonished on what level he already plays, keeping in mind that he just started to practice professionally.

Although Leader entered the CFL Global Draft, he decided to sign up for the Spring League as it gave him a chance to play American Football for a short period of time without singing a multi-year contract: “[…] As a global player [in the CFL], you have to sign a three-year contract which I did not want to do. I never played the sport […]”. So, Leader went on to play in the Spring League for the Aviators, gaining his first ever American Football experiences: “I kicked my first ever field goal in Lucas Oil Stadium on national television. That was a really cool experience”.

Playing your first ever snap of American Football on a professional level is far from the norm, as Leader points out: “It’s a bit ridiculous to play your first ever game in this stadium on national television, alongside other guys who already played in the NFL or high-level D-I college [football]. It was funny to jump in on that high level, but I think kicker is one of the few positions you can do that”.

The mental aspect of practicing for months without playing in a real game put some pressure on Leader: “It was an amazing feeling kicking my first every kick, looking up and seeing the ball go through the posts. It was exhilarating but also a big sense of relieve. Because I’ve been thinking about this first kick for, you know, two to three months then in practice leading up to that. I didn’t know what to expect. So, thankfully that worked out”.

After gaining his first American Football experiences, Leader started to reconsider joining the Canadian Football League, as he told us in our conversation. After Leader moved back to Ireland, he surprisingly received an e-mail: “I was sitting down at home one day thinking about what’s next […]. Literally within five minutes of that I was having my morning coffee […] and I checked my e-mails. And I have an e-mail from [Panthers Head] Coach Samel saying ‘hey, we are looking for a kicker. Would you be interested in potentially coming?’. And I watched the ELF highlights on YouTube, so I was aware of what it was”, Leader told us with excitement in his voice.

Before jumping to conclusions, Leader talked to a friend of his who Barcelona Dragons fans know all too well; Giorgio Tavecchio: “I ended up calling [Barcelona Dragons kicker] Giorgio Tavecchio because I met Giorgio in San Diego. […] So, I talked to him and ask him about his experiences, how he finds the league, the competition, professionalism, everything. So, we talked like 40 to 50 minutes one day and he spoke really highly of his experience in Barcelona and highly of the ELF. […] So, after talking to him, I sent an e-mail to the [Wrocław] Panthers and said, ‘Let’s do it’”.

After Leader signed his contract, he flew out to Wrocław to join the Panthers organization: “I arrived last Wednesday and met the guys. […] I had one practice, I did a few punts and a few kicks in practice. And then we ran a bus to Cologne”. Leader’s name was already called upon in the game against the Cologne Centurions last Sunday when he converted his first ever field goal in the European League of Football. Although he will play punter as well, Leader explained that he is more comfortable at kicking: “I would say that I’m probably more comfortable kicking, just because it’s more similar to rugby. […] But I like doing both!”

When we asked Leader if he considered going for drop-kicks because of his background with rugby, he started laughing: “I think the longest drop-kick I kicked is a 60-yard drop-kick through the posts. […] You never know, you might see me do one in the next few weeks, hopefully”.

Having the nickname ‘tiger’, it is only right that Leader joins the Wrocław Panthers to fight for a spot in the playoffs. It will be exciting to see what the Irish kicker and punter has in store for his new team in Poland and the European League of Football.