Sea Devils running backs coach Sören Hauff: "My goal is to get everyone moving forward"

From serving in the military to playing football. Sport unites and brings people together. 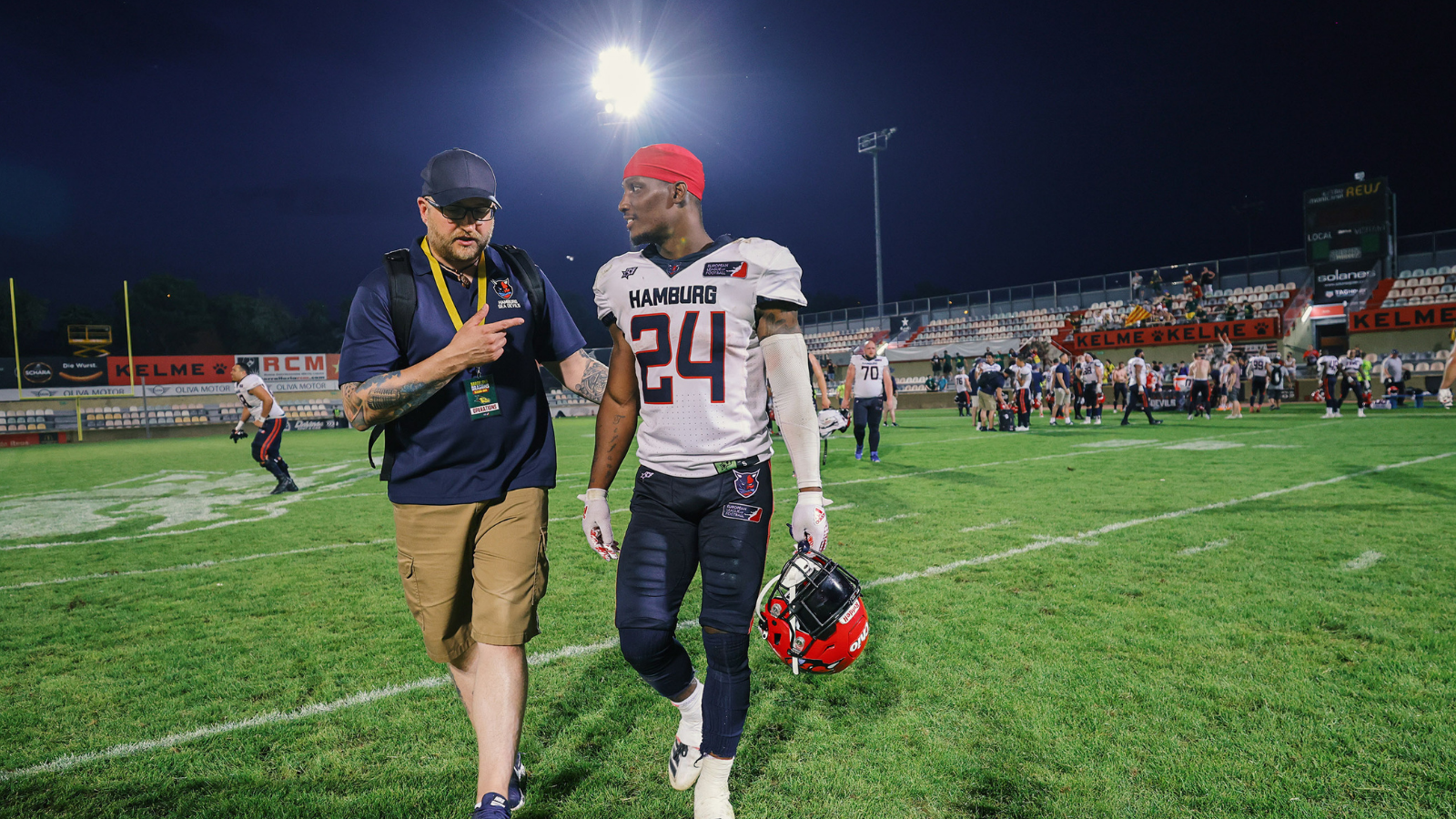 Sören Hauff, running back coach for the Hamburg Sea Devils, was able to walk both paths. He played football himself for several years in Elmshorn and Flensburg, Germany, and also played semi-pro football in the United States, while being in Texas with the Military. As a soldier, Hauff has been deployed overseas several times and – looking at recent events – has his eyes on the war in Ukraine. “You have to expect to be called back to foreign deployment.” he says. Football – as he explained – provides normalcy and hope.

Military and football hand in hand

When playing he always had an eye on all aspects of the game. At the beginning of 2007, Hauff was already looking for a new challenge: coaching. Initially, Hauff coached a women's football team and was working as a player-coach in Northern Germany. However, he was then hired quickly for the state-selection team of the northernmost state, Schleswig-Holstein, as a linebacker coach.

‍
In addition to his duties there, the professional soldier was drawn to Texas, United States, from 2010 to 2015. As a walk-on, he was able to improve his knowledge at the University of Texas at El Paso. For example, he worked briefly alongside the Cologne Centurions' new head coach, Frank Roser – who he met in 2017 at the UTEP.
His journey took him alternatively from Germany to the United States. In Germany, he participated in the World Championships as a coach in both 2010 and 2013. Hauff also supported the women's national team as a coach during the 2015 European Championships. With the Elmshorn Fighting Pirates, Hauff initially took on the defensive backs and worked as special teams coordinator, but was then recruited to the running back roster fairly quickly by the Pirates' former head coach Jörn Maier. Hauff remembers the time fondly. "I had already looked into all positions of football before, then helped with the running backs. Then 'Nommi' [Andreas Nommensen] said to me, you're going to stay [our] running backs coach. To improve you talk a lot with coaches from Germany, including Berlin or Bavaria,” he looked back to coaching with former Sea Devils offensive coordinator and head coach Andreas Nommensen and his past.

With Charles Jones, there is a new head coach leading the Hamburg Sea Devils into their second season who appreciates the work Hauff put in: “He is a good coach. The players and other coaches respect him for his work. His practices, workouts and good organization speak more than thousand words.”
Hauff is meticulous, shows self-confidence and is confident that his running backs will deliver this year as well. "I try to develop players. We have enough potential here that you really can't underestimate", Hauff enthuses about his backfield which ranked third last year with 1765 yards and second with 147.1 yards per game. Although Xavier Johnson (ranked third in rushing yards league-wide) and Julian Ampaw (ranked ninth rushing yards) left the team, Gerald Ameln (sixth in rushing yards in the league and “Offensive Rookie of the Year”) and Glen Toonga, one of the best European running back came to Hamburg to step in their shoes. With now re-signed running backs Simon Homadi and Jóhann Hummel, they form the backfield for the Sea Devils in 2022. "We will see how Glen, Gerald, Simon and Jóhann develop. The talent in all four athletes is big enough so that with the competition, the opportunity for development is very high."
Hauff is a players coach, someone the players recognize as a student of the game. "My goal is to get everyone moving forward, to work with the guys so they are a unit. Currently, I can still influence the guys. That they know they can listen to me and trust me."

"Running backs can start here without any problems"

Looking at the development of German running backs, Hauff says: "German football is so strong that we have developed into one of the best nations. Meanwhile, many running backs can start here without any problems". Homadi and Ameln are considered German running back hopefuls. Jóhann Hummel is currently running a bit more under the radar, but even offensive coordinator Kirk Heidelberg thinks highly of the offensive talent. "Jóhann can make the difference when he faces competition in the backfield. Coach Hauff and I are looking forward to seeing how he will develop compared to last year. There he could already show strong approaches”, Heidelberg said. He also mentioned Homadi: “Simon is someone I am especially looking forward to seeing in the upcoming season. Coach Nommensen spoke highly of him and gave him high praise”.

‍
Sören Hauff can look at a great running backs-corps and he knows both Hummel and Homadi from last season. Since the start of the 2021 season, Homadi has gained nearly 10 kilograms and currently stands at a height of 1.85 meters at 95 kilograms. In any case, the backfield is promising. However, who will start week one this year does not seem clear yet.

The entire backfield does look different than last year, but not unlike other teams, the Hamburg Sea Devils want to start the season with a German quarterback in Salieu Ceesay. Athletic, fast, variable.

‍
"We're not as predictable as an offense. With the running backs, what counts for me is blocking, catching, running. Always give 100 percent, even in practice. With Sally [Salieu Ceesay], of course we can run different plays than before", Hauff said. "Pass protection is just as important as the running itself. We have to give the quarterback time, help him out and be there as a unit to help the team. That's what I expect.”
It looks like the season can’t come soon enough for the Sea Devils, Coach Hauff and his running back corps. The talent could be unmatched in the league.

In the meantime, Hauff has been deployed in the military. Hopefully he will join the Sea Devils soon and come back healthy.