The Vienna Vikings stay undefeated and win 29-13 against the Raiders Tirol! 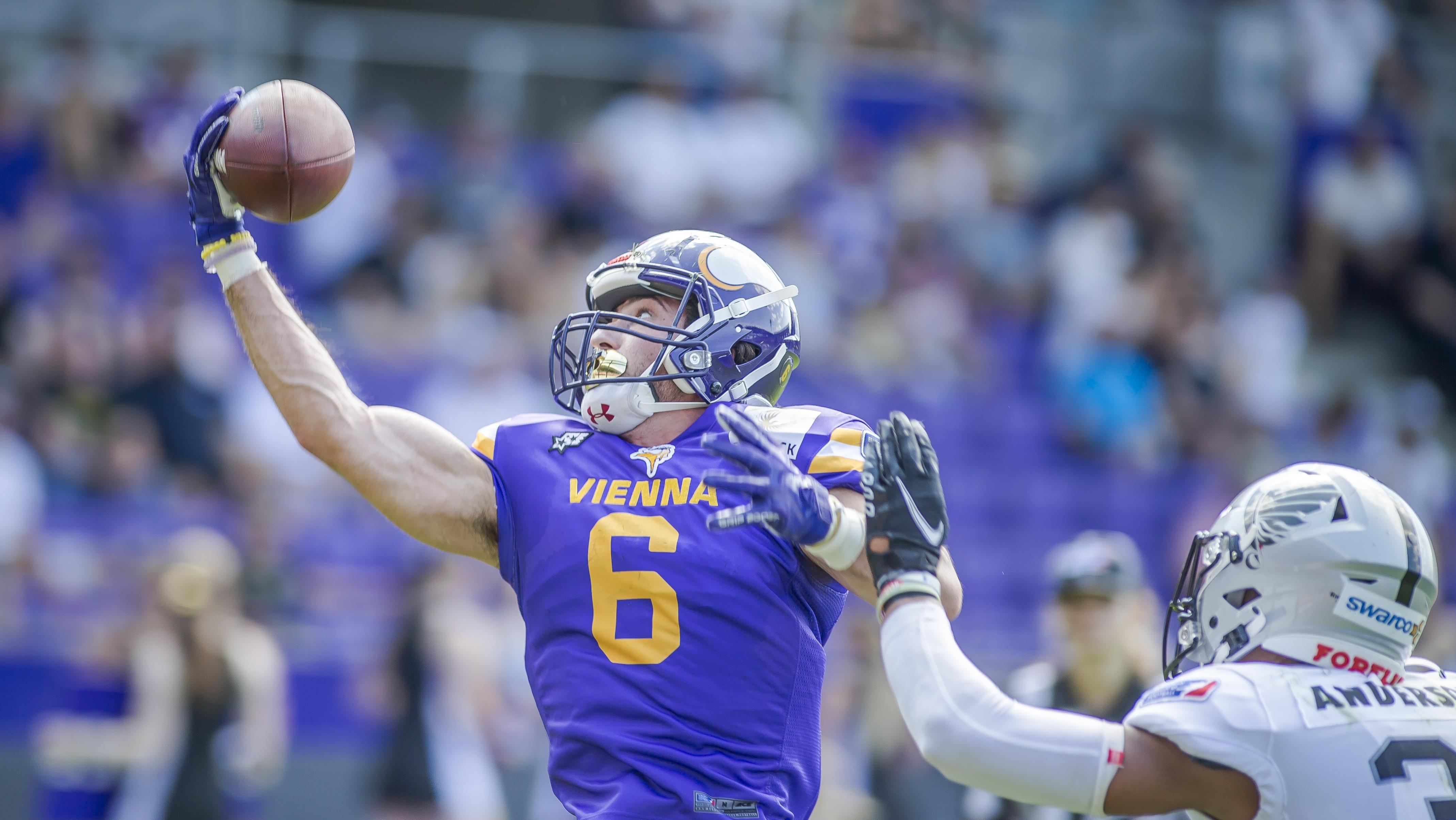 Hamburg started off the game by using American standout wide receiver Jéan Constant on three consecutive plays to march down the field.

After an early touchdown run by quarterback Salieu Ceesay, Rhein Fire quarterback Dagdelen threw an interception when he was heavily set under pressure.

However, Rhein Fire’s defense held up in the redzone with two consecutive tackles for loss by linebacker Martin Pinter to close out the first quarter. No matter the great defensive plays, Ceesay kept his calm and found tight end Levi Kruse over the middle of the field to extend their lead.

With Rhein Fire trailing the Sea Devils 14-0 early in the game, head coach Jim Tomsula decided to bring quarterback Jadrian Clark into the lineup against his former team.

Although the experienced quarterback had a positive impact on Rhein Fire’s offense, the team could only come away with a field goal. After standout running back Glen Toonga scored the third Sea Devil’s touchdown, Rhein Fire cornerback Omari Williams provided a spark for Rhein Fire with a kickoff return touchdown right before halftime.

Rhein Fire was rolling in the third quarter until running back Jason Aguemon fumbled the ball and gave it right back to the Sea Devils. After a great pass by Ceesay to wide receiver Jéan-Claude Madin Cezero, running back Toonga ran into the endzone for his second score of the game.

Just when Rhein Fire began to move again offensively, Clark threw an interception to stop the gained momentum. On their next offensive drive, Rhein Fire had to punt the ball away once again.

The Sea Devils extinguished the last spark of the Rhein Fire with another rushing touchdown by Ceesay.

With a score of 38-10 favoring the Sea Devils, quarterback Moritz Maack entered the game tore place Ceesay for the last minutes of the game.

In the last two minutes, Rhein Fire was finally able to score on offense with a touchdown by fullback Patrick Poetsch.

At the end, the Sea Devils cemented their status as one of the hottest candidates to win it all in 2022 with a dominating win over the Rhein Fire.

The Austrian battle started off slow as both teams did not finish their first drives with points.

But on theVikings second position, wide receiver Jordan Bouah ran down the field and was hit by a perfect pass of Jackson Erdmann. Just moments later, Erdmann found his wide receiver Breuler for the second touchdown of the game.

No matter the 14-0 lead by the Vikings, the Raiders moved the ball down the field with a great pass by quarterback Sean Shelton to his wide receiver Yannick Mayr. But moments later, Shelton fumbled the ball which was recovered by a strong Vikings defense so far. As this was not enough entertainment over a few minutes, the Raiders linebacker Lucky Ogbevoen recovered a fumble by the Vikings to set the Tyrolean franchise backup in the redzone. This time, the Raiders finished with a touchdown by Philipp Haun to get back into the game.

On the Vikings next drive, defensive back Exavier Edwards came out to play offense once again and capped of the drive with a touchdown over the middle. The Vikings kept their foot on the gas and scored another touchdown through the air with running back Anton Wegan tracking down the ball in the endzone.

Although the Vikings offense rolling over the first half, Erdmann made his first big mistake by throwing an interception right in the arms of Dominique Shelton. But after a few snaps on offense, Vikings defensive lineman strip-sacked Shelton to end the first half.

The second half of the game was scattered with big plays by both defenses. Once the Raiders reached the redzone, Leon Balogh stopped their drive with a massive sack against Shelton.

After a few possession changes, the Raiders were knocking on the door of the Vikings early in the fourth quarter. But after four downs, the Raiders turned over the ball to the Vikings with only twelve minutes to go.

As the Vikings took some more minutes of the clock, the Raiders were finally able to put points on the board in the second half with a great run by newly signed running back C.J. Okpalobi.

After the two-minute warning, Shelton threw another interception which finalized the 29-13score in favor of the still undefeated Vikings.