The Frankfurt Galaxy and the Berlin Thunder have a positive record for the first time this season! 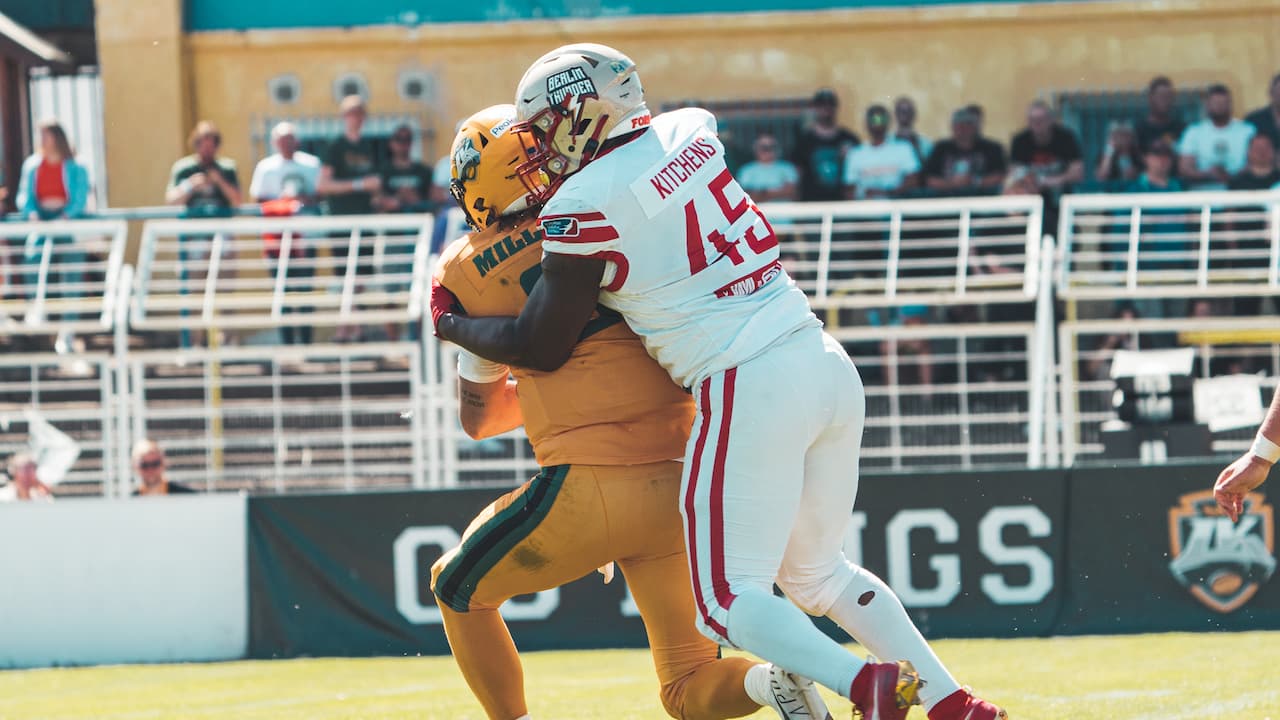 The Centurions had another slow start on offense this week. But after the first few drives, the German franchise picked up some steam and moved the ball over the field. Wide receiver Jannik Loercks ended the drive with a long touchdown over the left side which moved the score to 7 – 6 for the visiting team.

After three touchdowns by the Galaxy, the reigning champions were up by 13 points. However, a trick-play and an interception later, the Centurions were back in the game with a halftime score of 20 – 14 for the Galaxy.

With a slow start by both teams in the second half, the Centurions defense kept putting pressure on the Galaxy. But with two field goals by Rimmler, the reigning champions added to their lead.

After Weinreich was intercepted in the third quarter, the German quarterback threw another pick in the fourth quarter to linebacker Josiah who returned it for a defensive touchdown. This was the moment the Centurions were breaking apart and suffered touchdown after touchdown against the Galaxy.

This led to backup quarterback Alexander Frisch stepping in for the remainder of the game. However, the youngster could not turn anything around.

A good-looking Frankfurt Galaxy team controlled the Centurions over all four quarters at home and reached the .500 mark for the first time in 2022.

Early miscues by both teams meant a lot of possession changes in the first quarter. But the interception by quarterback Dante Vandeven set up the Panthers in prime field position. However, the Panthers could not cross the goal-line and turned over the ball on downs against a strong looking Surge defense.

In the second quarter, the Panthers defense showed what they are able to do with a strip-sack against quarterback Vandeven which ended up being advanced into the endzone by the Panthers for the first score of the game.

Otherwise, the Panthers offense had a tough first half with only 30 total offensive yards, rushing and passing combined, on the first 23 plays.

Although the Surge possessed the ball for almost 20 minutes in the first half, thePanthers came away with three touchdowns on big plays. Quarterback Vandeven had a tough outing in the first half as well with two inceptions, one fumble, and no touchdown passes.

At the start of the second half, the Panthers had their best offensive drive of the game which ended with a rushing touchdown by quarterback Jarman.

Meanwhile, Surge quarterback Vandeven sent prayers down the field numerous times but didn’t receive an answer once. With only 17 offensive yards in the third quarter, the Surge offense was non-existent.

If this wasn’t enough, Vandeven threw his third interception of the game on another long pass.A turnover on downs late in the fourth quarter by the Surge just added to an already miserable day for the German franchise.

With a final score of 34 – 0, the Panthers end the game with pure dominance over theSurge on all three phases of the game.

New Kings quarterback Conor Miller connected right away with his receivers at the start of the game. Especially with wide receiver Seantavius Jones who caught the go-ahead score at the beginning of the first quarter. However, Germinerio took matters into his own hands and rushed for the Thunder’s first touchdown of the game on the very next drive.

The league’s sack leader Kyle Kitchens also showed up in time again with a two-and-a-half sacks against the Kings. The Berlin Thunder defense played a great game overall.Only American wide receiver Seantavius Jones came through with big plays from time to time.

The second quarter was owned by Berlin Thunder wide receiver Robin Wilzeck. The NFL-hopeful caught two deep passes each for a touchdown which gave his team a 21 – 9 lead at halftime.

In the second half, former NFL and CFL wide receiver Jones took over the game with two touchdown grabs to put the Kings in front of the Thunder.

Without losing any time, quarterback Germinerio put the Thunder on his shoulders again and rushed into the endzone for his second score on the ground.

After a hard-fought last quarter, the Thunder kneeled to celebrate 4-3 record in the North Conference with a final score of 33 – 22.