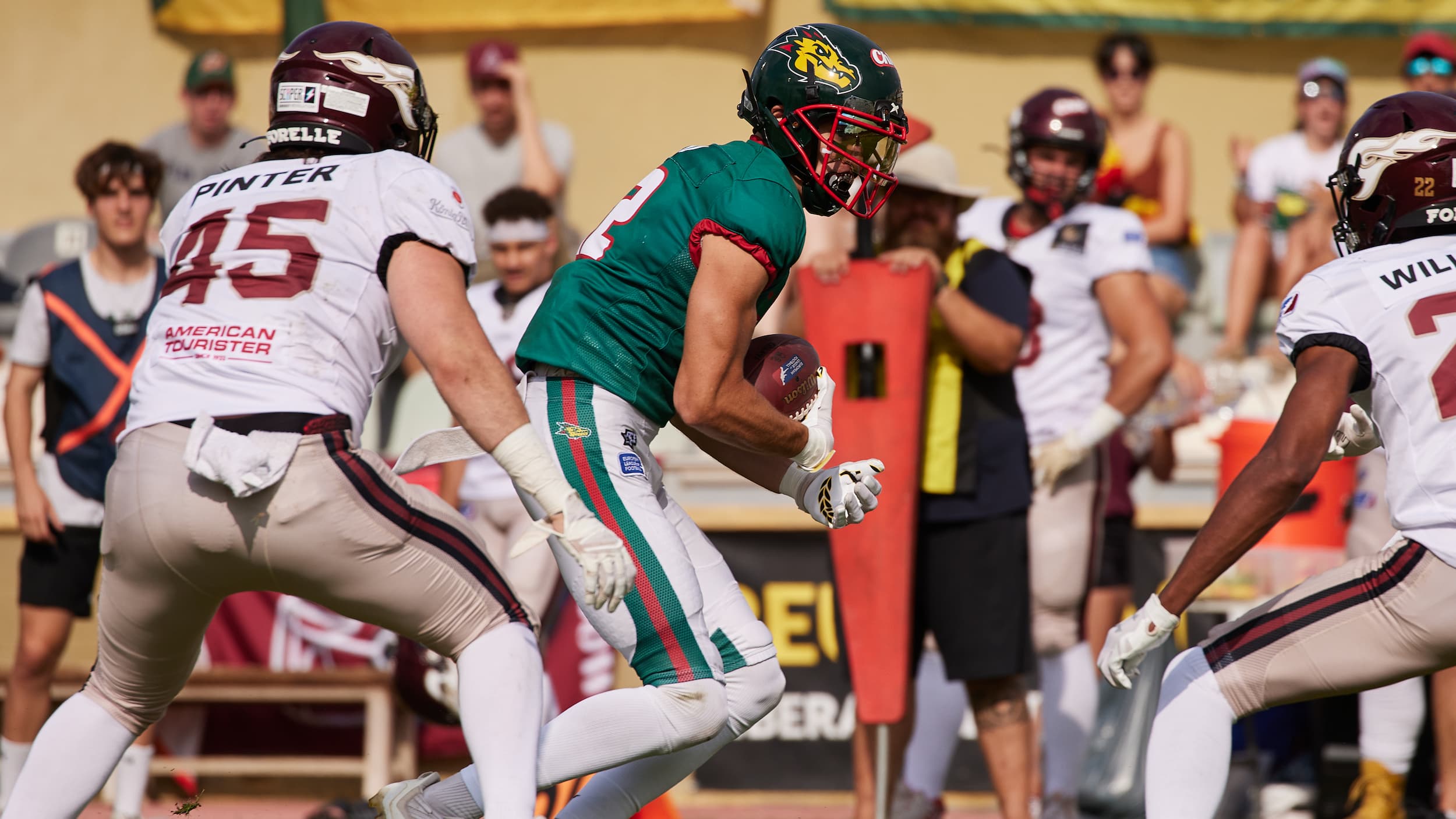 A game with playoff applications. The formerly 4-3 Rhein Fire visiting a strong Dragons team at home set the stage for a key matchup in the South Conference.

Rhein Fire and the Dragons both went for it on fourth down early in the game to score first. However, only the Dragons were successful with quarterback Zach Edwards already running for over 25 yards on the first drive. The gunslinger even ended their first possession with a touchdown run.

But after just moments, Rhein Fire defensive back Jannik Seibel intercepted Edwards in the endzone to give Rhein Fire another shot offensively. This time, quarterback Jadrian Clark looked more comfortable finding his receivers. He ended the drive with a great pass under pressure to running back T.J. Alexander.

Rhein Fire could not convert the extra point as they have released both their kickers from the first weeks this season. Punter Eisenhut had to try his best but kicked the ball wide right.

Later in the second quarter, the Dragons were going for it on fourth down once again. However, wide receiver Benjamin Plu came down with the ball just slightly out of bounce which turned over the possession to Rhein Fire.

Because of a great defensive play by Dragons defensive back Lucas Masero, the Spanish franchise got back the ball with almost four minutes remaining in the first halftime. Edwards and his favorite target Kyle Sweet turned their additional possession into points right away as the gunslinger found his wideout in the endzone.

Rhein Fire quarterback Clark even extended the Dragons lead to 19-9 by throwing in interception to defensive back Niko Lester who returned the ball all the way back to Rhein Fire’s endzone for six points.

As Rhein Fire started the second half on offense, it was on Clark to put his team back in a good position; and he did. After being under pressure, Clark fired a ball to his premier target Nathaniel Robitaille who came down with the ball in the endzone on the very next play.

As the German franchise found some offensive rhythm on offense, their defense was not able to stop Edwards and Sweet as they connected for their second score of the game. However, Clark and Robitaille were connecting for their second touchdown as well.

With both teams trading blow after blow, it was a tight race in the third quarter with a score of 26-23 favoring the Dragons.

After a 54-yard kick-return by Moll, the Dragons were not able to put any more points on the board. However, Edwards was able to find former CFL receiver Benjamin Plu for a long pass down the right side of the field to set up the Spaniards in the redzone. However, cornerback Till Janssen intercepted Edwards because of a miscommunication between Plu and Edwards.

With a Dragons lead of 26-23, Clark took over for Rhein Fire again but was taken down right away by defensive end Michael Sam. After two pass attempts, Rhein Fire went three-and-out right away.

On Rhein Fire’s last drive, wide receiver Robitaille fumbled the ball which led to another defensive touchdown for the Dragons with Masero returning the ball.

With a score of 33-23, it was impossible for the German franchise to come back in this game. At the end, the Dragons have won their sixth game of the season and are the undisputed top-team in the South Conference!