QB Jan Weinreich: “I am very satisfied with how I played”

The only German starting quarterback in the European League of Football keeps improving. 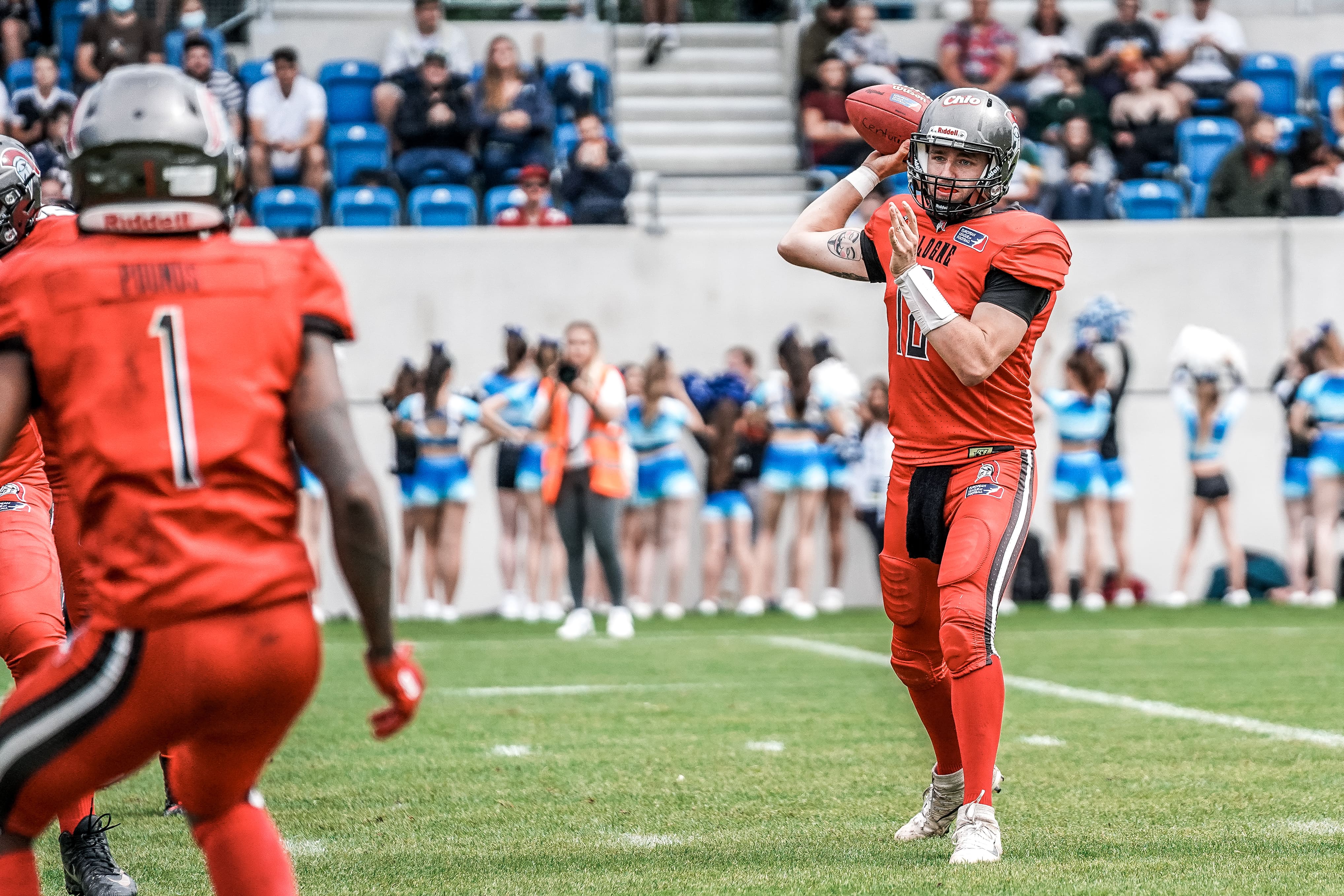 The 3-2 Cologne Centurions had a dominant performance on Sunday against their conference rival Stuttgart Surge. As the Surge was able to stop star running back Madre London from time to time, the Centurions passing offense was active early in the game. After the only German starting quarterback in the European League of Football finished the game with 307 passing yards, four passing touchdowns and one score on the ground, he celebrated the victory with his team: “Now, we are back to normal. But after a win you are always happy and have to somehow digest the game and two days later you are already focused on the next game”. When asked how Weinreich feels abou this outstanding performance on Sunday, he was already pointing to their next game: “I watched the re-live on television yesterday and I’m extremely happy and proud of how we played against Stuttgart. It was an awesome day, but we are already focused on Wrocław [Panthers]”.

Weinreich also explained that this win gave him a lot of self-confidence and a feeling of developing a routine at the position: “I started to feel more settled compared to how I played the game before. You are just in the moment and only realize later how good or bad you played. But in this game, I really felt how calm and with how much routine I can play the game and that I can dictate the game myself. I just felt really confident and had the feeling to be able to complete any pass at the beginning of the first quarter. […] This game gave me a lot of self-confidence”. He further pointed out that he is just happy about the game on Sunday: “I am very satisfied with how I played and I’m just happy to have played such a good game”.

Centurions’ quarterback Weinreich was also happy that he and his fellow teammate and wide receiver Quinten Pounds were able to showcase their connection on the field: “I talked to Quinten [Pounds] and we just waited for this break out game. We were just happy to finally show what we can do on the field. I mean, we don’t pass the ball that often. And if we pass, the deep balls are not high-percentage throws and therefore we were not able to showcase what we can do until now. So, we were just happy to show that we are also a big part of the offense. Also, players like Noah Aarass who caught three important passes on third downs to keep us alive. And as a team, we can be proud of that. Although Quinten [Pounds] is at the top, we just performed well as a team overall. And that made us very happy and boosted ourself-confidence.”

We asked Weinreich if teams will now account for the passing game as well, instead of just focusing on star running back London. He explained that teams will still focus on London: “I think that the [Wrocław] Panthers already now that we can pass the ball because we passed the ball a lot in our first matchup. I think I got about 227 passing yards and two touchdowns. But I think the teams playing us won’t change that much because we still have Madre [London] in the backfield. Everyone knows that you must stop him. Teams will for sure look at our passing game a little bit closer, but they will still focus on stopping our run game. Teams will still like us to pass the ball rather than running the ball. That’s just football. You always have a game plan, but a game plan can’t cover everything an offense does. And for us, it will be the passing game and I think that won’t change”.

The 3-2 Cologne Centurions are preparing to face the 3-2 Wrocław Panthers at home in an exciting interconference matchup. Weinreich also touched on the preparation for the upcoming game: “We are watching a lot of film. We celebrated the victory on Sunday, but now we are fully focused on the [Wrocław] Panthers. I mean, they won the first game and they earned it. But the [Wrocław] Panthers also know how close the game was. At some point, we were only trailing by five or six points. So, if we had made the field goal and a few extra points we could have beat them. The Panthers got a bit stronger over the course of the season, but we want to use the opportunity to show that we can win against a team that we lost to earlier in the season. It’s a really important game for us”.

Fans Can Make a Difference

At the end of our conversation, Weinreich had amessage for the fans on Sunday. He would love to have a great atmosphere in the stadium and loud fans to help out their defense: “I love the fans. When we played in Stuttgart on Sunday, the fans there were top-notch. And I believe you could see that we were a little bit nervous at the beginning. And I would love to have that at home as well. I’m sure that we can do that. We had a break of three weeks at home, and I think the fans are excited! I would be very happy if we could be loud and create a great atmosphere to make it as difficult as possible for [Lukas] O’Connor because he played very good up until now”.