The Sea Devils advance to the Championship Game after winning a nail-biter against the Panthers! 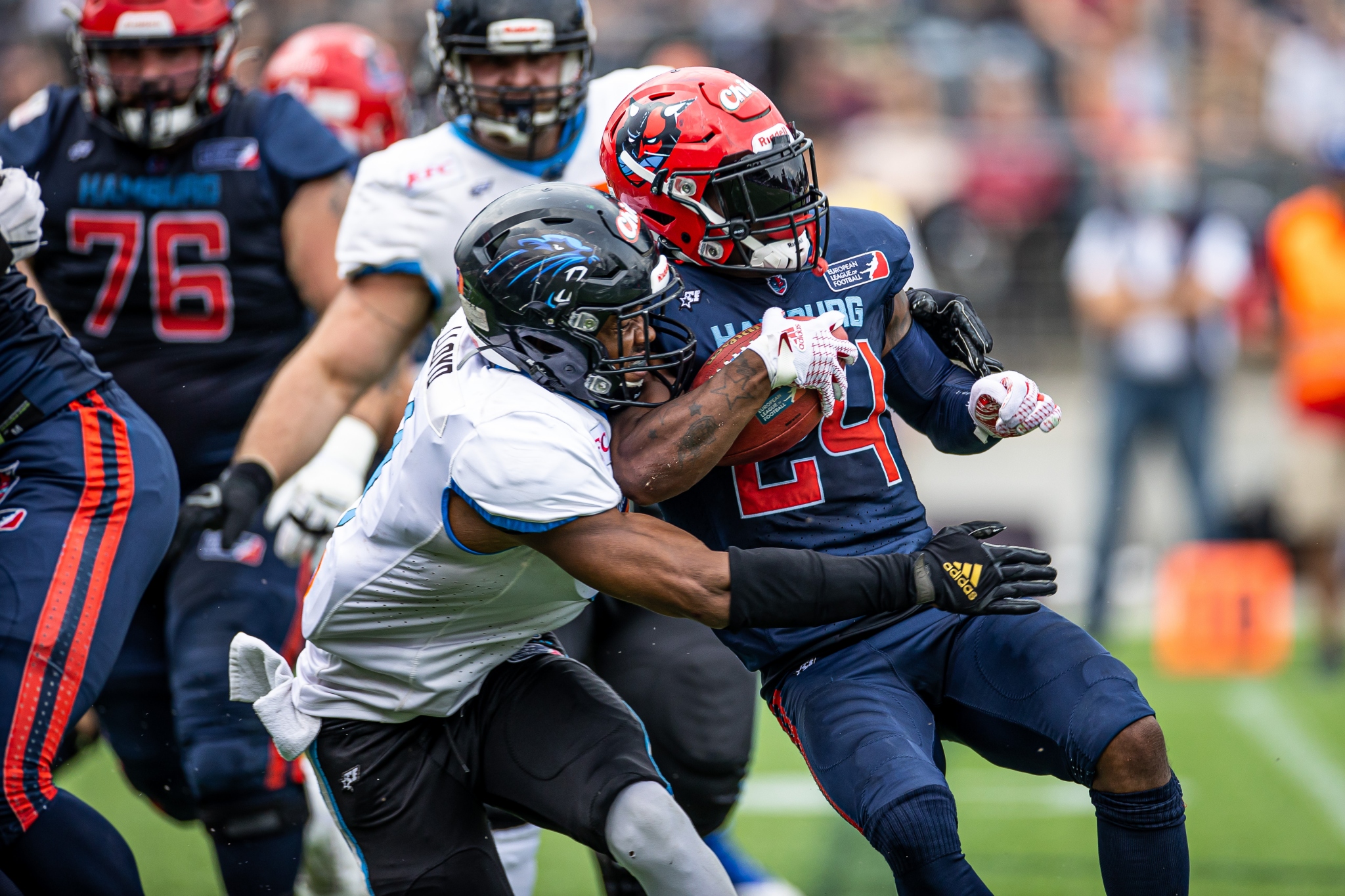 The Wrocław Panthers (6-4) travelled to Hamburg in this showdown of the North Conference to face the Sea Devils (7-3). This do-or-die matchup featured a lot of highlights and exciting moments.

However, the Sea Devils were still without their star pass-rushers Kasim Edebali and Jan-Phillip Bombek. On top of that, defensive back Barry Maruschke, defensive Nelson Imasuen, and linebacker Ambroise Mati were out for the game as well.

The Panthers did not miss a single player as their fullback Konrad Starczewski returned to the starting lineup.

The last game before the European League of Football Championship Game kicked off in Hamburg at Stadion Hoheluft at 2:45 p.m. CEST.

The Panthers kicked off the game and the Sea Devils received the opening kickoff to start this game on offense. On the very first play of the line of scrimmage, Sea Devils running back Xavier Johnson burst free for an eight-yard gain. A couple of plays later, Johnson slipped which ended the run short of the line to gain. On third down, Clark connected with his favorite target Botella Moreno who turned up the field. A few plays later, the Sea Devils faced a long third down after Clark was sacked for a loss of yards. After Clark moved the chains, he fired a pass into the endzone to wide receiver Kwame Ofori. After the PAT was good, the Sea Devils scored on their first possession of the game to lead early in the first quarter.

After a touchback, the Panthers offense came on to the field for the first time in this playoff matchup. Sea Devils defensive tackle Evans Yeboah was all over the first play as he batted down an attempted pass by Panthers quarterback Lukas O’Connor. After moving the chains twice, O’Connor fired a deep pass to wide receiver Przemysław Banat on a free play who outran two Sea Devils defensive backs before he hauled in the pass and scored the touchdown. The PAT was good by kickerTadgh Leader which set up the score at 7-7 each with over eight minutes to play in the first quarter.

The Sea Devils were back offense and immediately moved the ball with a run and a long pass to tight end Botella Moreno. At the Panthers 29-yard line, Johnson kept impressing with long runs. After another pass to Botella Moreno, the Sea Devils lined up inside the Panthers five-yard line. On the very next play, Johnson ran up the middle and pushed the ball into the endzone for their next touchdown. The PAT was good which set the score at 14-7 and Hamburg back on top.

After another touchback, the Panthers were back on offense and moved the chains with a pass to wide receiver KaVontae Turpin. On a shot third down, Sea Devils defense end Berend Grube stopped Panthers running back Philéas Pasqualini short of the line to gain. This play forced the Panthers to punt the ball away.

The Sea Devils were back on offense with just over three minutes to play in the first quarter. After a broken play on an attempted flea-flicker, Clark still found his tight end Botella Moreno for a gain of six yards.

At the beginning of the second quarter, Clark almost threw an interception to Panthers’ cornerback Darius Robinson which set up the offense with a long third down. Sea Devils running back Ampaw could not move the chains after catching a pass by Clark which forced Hamburg to punt.

The Panthers were back on offense and still struggled to establish the run game with Pasqualini. However, Turpin crossed the field over the middle and made a monster catch to move the chains. After two runs, the Panthers faced a third down around midfield. Despite facing heavy pressure, O’Connor completed a quickpass to Banat to move the chains. After a pass to Turpin, O’Connor found the speedster again. This time, Yeboah had a monster hit against Turpin who was slow to get up after the tackle. Then, O’Connor almost threw an interception to defensive back Slater. Just one play later, O’Connor found Turpin in the endzone who high-pointed the ball and scored his first touchdown. After the PAT was good, the score was set at 14-14 each with over six minutes left in the second quarter.

The Sea Devils kept running the ball on first down and continued to gain a lot of yards with Johnson. However, Botella Moreno dropped a pass despite being wide open on the right side of the field. This forced the Sea Devils to punt the ball again.

The Panthers were back on offense, but the drive stopped after Jeffrey Juurlink intercepted O’Connor on the third play of the drive.

The Sea Devils had over three minutes left in the first half to put points on the board after the big defensive play. Despite facing an early third down, Clark found his wide receiver Madin-Cerezo to move the chains. After the two-minute warning, Johnson broke loose and set up the Sea Devils offense inside the Panthers ten-yard line. With 38 seconds left, William Llyod intercepted Clark in the endzone which gave the Panthers one last opportunity in the second quarter.

With a couple of quick passes to Turpin, the Panthers offense lined up around midfield with 19 seconds left on the clock and all three timeouts. After another pass to Turpin, the Panthers took their first timeout of the half with only seven seconds remaining. Yeboah had an incredible first half and ended it with a batted pass which forced the Panthers to try a 62-yard field goal attempt. Leader almost made the field goal, but it went wide left as the clock hit zero.

The second half of the game began with a defensive pass interference by linebacker Miguel Boock. However, O’Connor almost threw and interception which forced the Panthers to punt the ball at the beginning of the third quarter.

The Sea Devils were back on offense at their own 13-yard line. After two runs by Johnson, the Sea Devils faced a short third down on which Clark kept the ball and moved the chains. On first down, Panthers’ safety Courageux made a great play on the ball as he read Clark’s eyes and broke up the pass. Two back-to-back plays against the Sea Devils faced a long third down. However, the Sea Devils were gifted a fresh set of downs after a defensive pass interference called against the Panthers. Inside Panthers territory, Ampaw was the running back of choice to run up the middle for a short gain. Just one play later, Johnson caught an important pass by Clark on third down to move the chains. After a great run by Clark, the Sea Devils moved inside the Panthers ten-yard line. However, the drive came to a stop and the Sea Devils settled for a field goal to put points on the scoreboard. This set the score at 17-14 with Hamburg back on top.

The Panthers next drive started with the best run of the game by Pasqualini. After gaining ten yards, O’Connor’s pass was batted away once again by a strong Hamburg defensive line. A few plays later, the Panthers were forced to punt the ball away.

With under four minutes remaining in the third quarter, the Sea Devils faced a long third down because of a false start. However, Clark found Botella Moreno on back-to-back plays which moved the chains twice. On the next play, Johnson had a great run to the right side, but fumbled the ball which was forced by Lloyd. However, the free ball was picked up by wide receiver Madin-Cerezo an advanced to the Panthers one-yard line.

The Sea Devils started the fourth quarter with a touchdown as Johnson rumbled up the middle for their next score. After the PAT was no good, the score was set at 23-14 with the Sea Devils on top.

The Panthers still struggled to establish the run game besides one ten-yard rush in the third quarter. This led to an early third down which they successfully converted into a fresh set of downs. A few plays later, the Panthers faced a third down again. This time, O’Connor found Banat on the right side to move the chains again. Inside the red zone, O’Connor found Banat on the left side of the field again. This time, the catch ended up being his second touchdown of the game. After the PAT was no good, the score was set at 23-20 with Hamburg still on top by three points.

Because of two penalties, the Sea Devils faced a long third down early on their next drive. After a short run by Johnson, the Sea Devils were forced to punt the ball away with about nine minutes left to play in regulation.

Turpin had his first return of the game which almost went to the 50-yard line. On second down, O’Connor found Zieba for a new first down. After a pass to Banat and a run by O’Connor, the Panthers marched down the field and were lining up in the red zone. After overthrowing Turpin in the endzone on second-and-goal, O’Connor connected with the standout wide receiver for a touchdown. After the PAT was good, the Panthers led by four points with a score of 23-27.

After a short run by Johnson, Goran Zec came into the backfield on a delayed blitz to sack Clark for a loss of yards. However, a questionable defense pass interference call against Panthers cornerback Darius Robinson set up the Sea Devils inside Panthers’ territory. Being behind by four points, a field goal would not have been enough for Hamburg. After an offensive pass interference by Botella Moreno, the Sea Devils faced a long second down just inside the red zone. A catch by Benjamin Mau set up Hamburg’s offense with a short third down inside the ten-yard line. On the first play after the two-minute warning, Johnson rumbled into the endzone for the score. After the PAT was good, the Sea Devils were back on top with the score set at 30-27.

A monster return by Turpin all the way into Sea Devils territory set up a long pass by O’Connor to Mazan. With just over one minute to go, the Sea Devils sacked O’Connor which forced the Panthers to take a timeout. At the 24-yard line, O’Connor passed incomplete which set up a field goal attempt by Leader. However, the field goal went wide left which made the fans at Stadion Hoheluft erupt in cheers as this turned over the ball.

The Sea Devils ended the game in victory formation with a final score of 30-27.

The Hamburg Sea Devils advance to the European League of Football Championship Game after a close fight with the Wrocław Panthers. The final field goal attempt went wide left which could have send the game to the first ever overtime in the young league’s history.

Unfortunately for the Panthers, their season came to an end as they lost by only three points to the winner of the North Conference; the Hamburg Sea Devils.

The European League of Football Championship Game will kickoff on 26th September with the Frankfurt Galaxy and the Hamburg Sea Devils battling it out in Düsseldorf at the Merkur Spiel-Arena. Tickets for the Championship Game are still available on Ticketmaster. You could also tune in on ProSieben MAXX, LIVENOW, or on you Gamepass to not miss the final game of the inaugural season in the European League of Football.