We are at the mid-season mark in the European League of Football. Let’s take a look at fulfilled expectations, disappointments, and the biggest surprises! 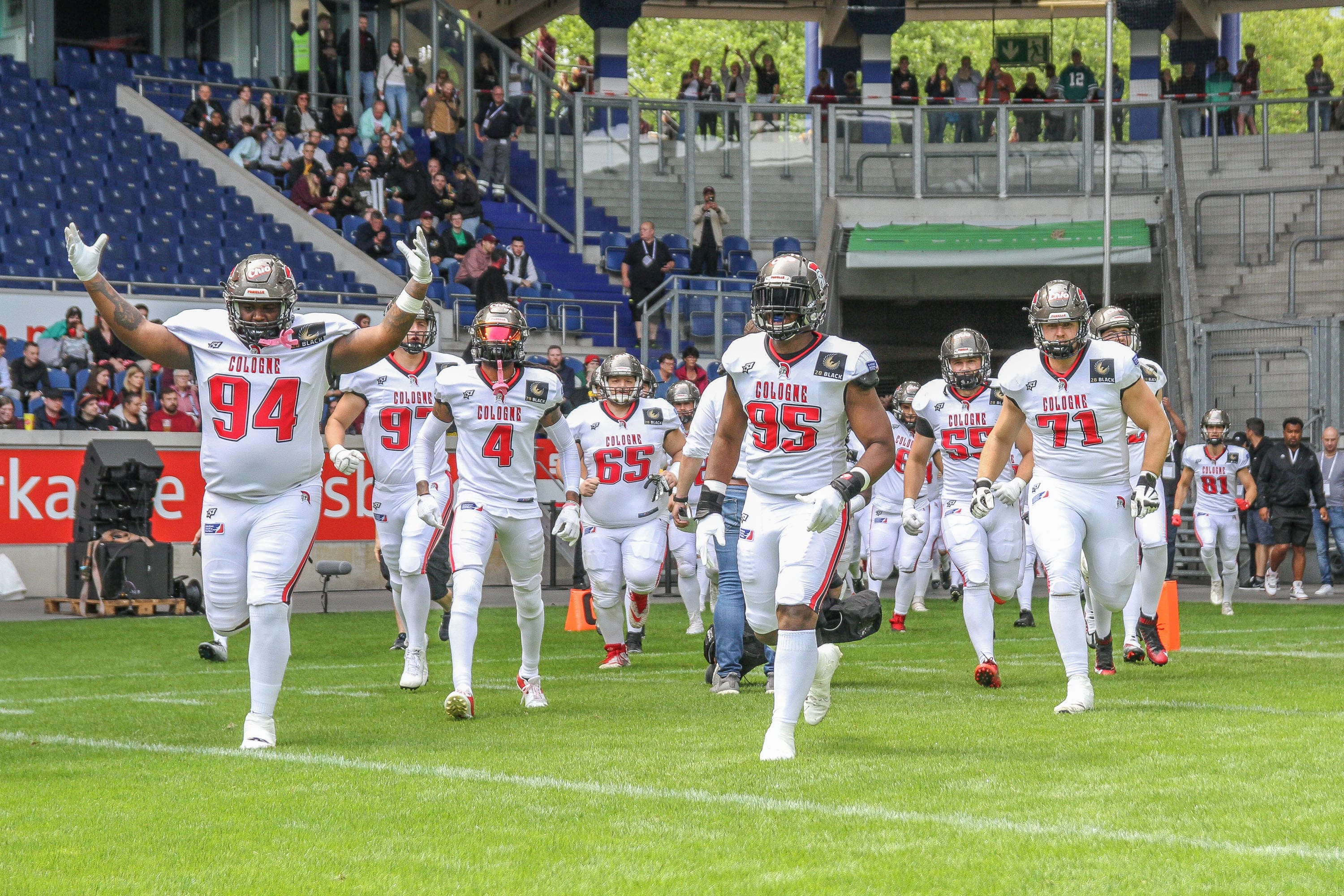 The Barcelona Dragons team went from zero to hero really quick. After ending last season as the second-worst team in the league with a 3-7 record and losing key players like Rémi Bertellin and Jéan Constant, most people thought they will be a mid-level team at best. Especially the offensive line that gave up 51 sacks last year needed to be fixed. With 14 sacks in six games, the offensive line still ranks second worst in the league but improved massively compared to last year. With newly found superstars like Kyle Sweet, returning standouts like Zach Edwards, Niko Lester and Jordi Brugnani and a coaching staff consisting of NFL veterans and young talents like Patrick Wennin, Andrew Weidinger’s squad took a massive step, now standing at 5-1 at the mid-season mark. If they can keep performing like this, the Dragons are destined for a spot in the European League of Football playoffs.

Before the season, especially after the Kyle Kitchens signing, there was a lot of buzz regarding the Berlin Thunder defense. But seemingly no one talked about the part, that is standing out the most: Their secondary. The Thunder defense allowed the least passing yards in the whole league (824) and the second least passing touchdowns (6). Besides USimport Robby Kendall at safety, the Thunder feature plenty of homegrown talents like Phillip Ruffin, Gino Chongo and Moritz Thiele. Adding Maceo Beard to the mix only improves Berlin’s secondary even further. You should definitely keep an eye on this defensive backfield in the second half of the season.

Michael Sam was originally announced as part of the Dragons' coaching staff heading into the 2022 season. But after Max Nacewicz decided to not play football just days before the opening weekend, Michael Sam decided to make his return to the gridiron. The former Missouri Tiger was a standout at the Division I level. In his senior season, Sam collected 11.5 sacks and 19 tackles for loss, making him a unanimous All-American, First-team All-SEC player and the SEC Defensive Player of the Year in 2013. Despite dominating at the collegiate level, Sam was only drafted 249th overall in the 2014 NFL Draft. After being cut, he joined the CFL, where he played one season before announcing his retirement from the sport in 2015. Now, at the age of 32, Michael Sam is back on the field for the Barcelona Dragons. With 5.5 sacks at 6.5 tackles for loss, the former Cowboy ranks 5th and 10th in those categories. Sam’s performance and leadership on the field, certainly are a factor for the Dragons’ success.

When it was announced that the Vienna Vikings and Raiders Tirol will join the European League of Football in 2022, expectations were high for them. Being the two best teams in Austria for over a decade now, and proving themselves on the international stage multiple times, fans expected nothing than dominance from them. And so far, they do not disappoint. Although Tirol struggled in their first two games, they have not lost since week two, while the Vienna Vikings did not drop a single game and are looking like the sure-fire title favorite at the moment. If both teams can keep going at this pace, it is likely that half of the teams in the playoffs will be from Austria.

Going into the season, the Hamburg Sea Devils were heralded as the best defensive team, with maybe the best defensive line Europe has ever seen. At the mid-season mark, the Sea Devils have allowed the least yards (1367) and the second least points (80) in the whole league, holding their opponents to an average of 227.8 yards and 13.3 points per game. But what really stands out is their performances against the run, allowing only 493 yards and zero – you read that right – zero rushing touchdowns throughout the first six games of the season. Throw their league-best 18 sacks into the mix, and you got yourself a defense that by itself makes you a title contender.

After winning the Defensive Player of the Year award with 12.5 sacks and 23 tackles for loss last year, fans were eager to see Kyle Kitchens dominate opposing offenses for his new team this season. And even though he had a stretch with lower numbers than usual in the first half of the season, Kitchens is tearing it up again this year. Leading the league in three categories with 8 sacks, 17 tackles for loss and four forced fumbles, he is once again the dominant force he was for the Kings in 2021. Especially last week, the defensive end was on fire, breaking his own single game record for most tackles for loss in a game with 6.5 against the Panthers. If Kitchens can keep terrorizing offenses like that, he might just win the DPOY award for the second year in a row.

Making the first ever European League of Football playoffs last year, the Cologne Centurions were a team to watch for this season. Losing head coach Kirk Heidelberg to Hamburg and league MVP Madre London to the USFL, there definitely were question marks, but they seemed to have been solved pretty fast. With highly sought-after Frank Roser becoming the new head coach, it was clear that the Centurions would shift to a more pass-heavy offense compared to last year. With All-Star quarterback Jan Weinreich under center, a strong offensive line with All-Star Fabian Kratz and talented Leander Wiegand and one of the league’s most talented wide receiver groups, featuring former Washinton Huskies pass catcher Quinten Pounds, Rookie of the Year Louis Geyer, and homegrown talents like Paul Kavadia-Lenhardt and Jannik Lörcks, their offensive firepower should be unmatched. And it was in the first three games of the season, scoring 121 points. But since then, their offense crumbled, only scoring 22 points in the last three games. But the biggest problem for the Centurions is their defense. Giving up 217 points, allowing 28 touchdowns and, 2204 yards (all second worst in the league) in six games is simply unacceptable. With a defensive performance like that, you just cannot expect to be anywhere near the playoffs. Right now, the Centurions are standing 2-4 in a conference with the 5-1 Dragons and 4-2 Rhein Fire and are most likely out of the playoff race. Things need to change in Cologne, if the Centurions at least want to end the season with a .500 record.

After many teams struggled with their kicking game last year, many expected the struggles to end this season. But although there are some great kickers like Jonas Schenderlein, Eric Schlomm and Giorgio Tavecchio, the overall kicking performances throughout the league is still lackluster. Out of 107 field goal attempts, only 67 have been successful, making an average of 71.69%. On PATs kickers made 141 out of 197 attempts, which is an average of 71.5 percent. Those numbers must improve, and they probably will, but it still is something disappointing, looking back at the first six weeks of the season.

After having one of the most electrifying offenses last year, the Panthers' offense is quite disappointing so far, despite keeping many key pieces in place. All-Star players like Philéas Pasqualini, Przemysław Banat and Jakub Mazan stayed in Poland and the Panthers signed additional star players like former Oklahoma commit Justice Hansen and former Division I wide receiver Malik Stanley. Despite this, the Panthers rank 9th in points scored and 10th in yards gained. Except Malik Stanley, who ranks 3rd in receiving yards and touchdowns, all the aforementioned players put up disappointing performances compared to last year, leading to Pasqualini even getting released. After Hansen suffered a season ending injury, the Panthers brought in Slade Jarman, who is playing decent but not as well as fans hoped for. Overall, their offensive output just is not anywhere near last year’s, earning the unit a spot in this category.