A preview of the playoff matchup in the South Conference with comments by Galaxy HC Kösling and Centurions HC Heidelberg. 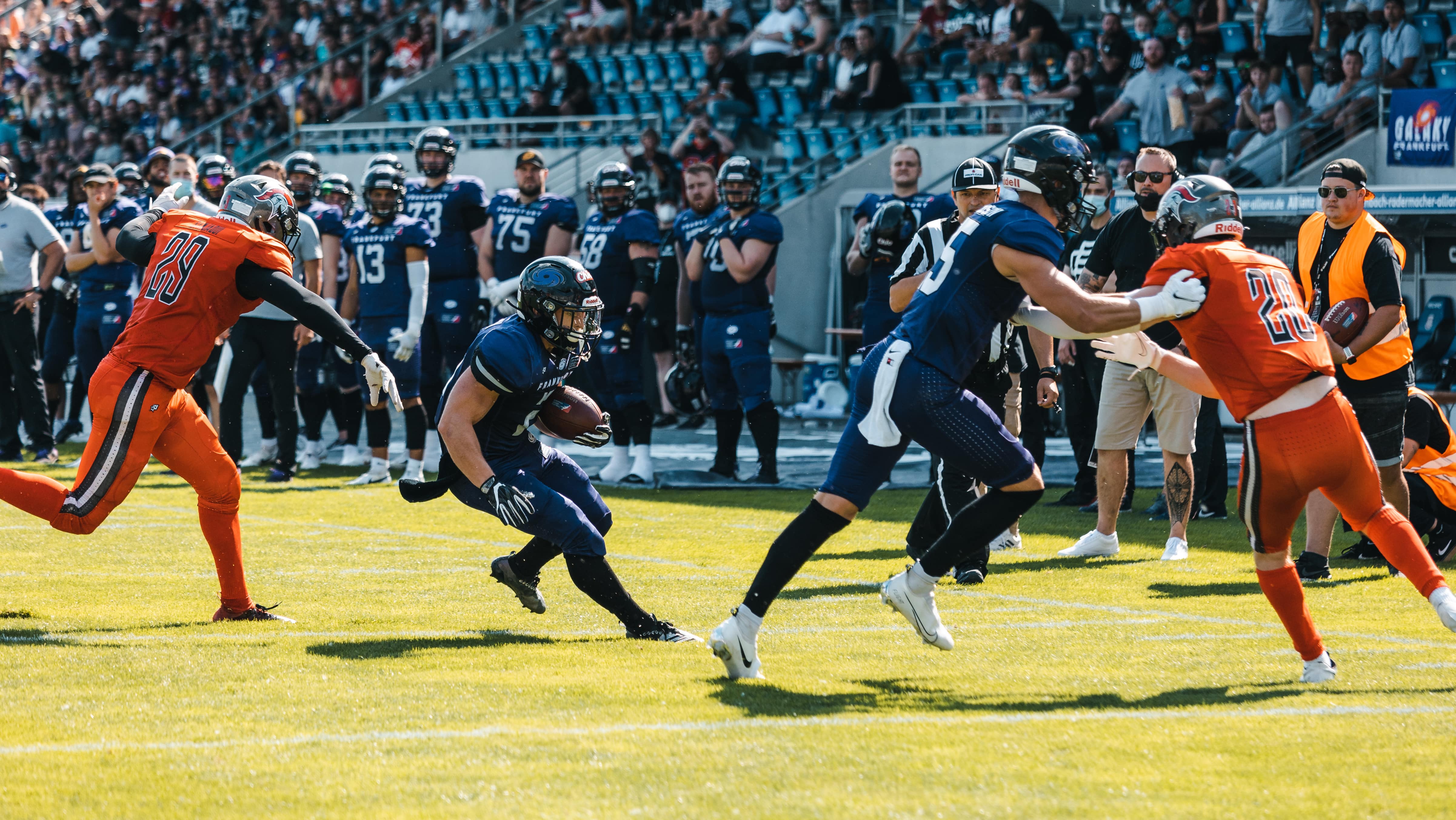 Galaxy RB Adams turning up the field against the Centurions in week twelve. ©Marlin Prauss

After a successful inaugural season of the European League of Football, only four franchises are left standing in the battle for the first ever Championship Game. Two of those franchises will meet tomorrow in an exciting showdown of the South Conference. The 9-1 Frankfurt Galaxy will host the 5-5 Cologne Centurions at the PSD Bank Arena at 2:45 p.m. CEST. Whoever comes away with a win advances to the European League of Football Championship Game.

Before this do-or-die matchup, we talked to both Head Coaches about their views on the upcoming game and the opposing team.

“We just prepared like we would for every other game. We stayed in our rhythm […]”, Galaxy Head Coach Kösling explained. After winning against the Centurions with a final score of 45-7 in week twelve of the regular season, Kösling is confident in his team: “You just have to say it, we are the best team after twelve weeks in the European League of Football […]”.
‍
Playoff-Feeling

In the playoffs, emotions run high, and nerves are taking over which make games even more exciting for the fans and for the players. In our conversation, Kösling touched upon his view on playoff games: “At the end, it’s just a different football game. It has different consequences, and everyone knows that. It’s just that extra tension in the playoffs”.

“They have an outstanding rushing attack. Their biggest strengths are Madre London, their offensive line, and their commitment to the running game. And they also have an experienced Head Coach [Kirk Heidelberg] and I think that will help them a lot in the playoffs”, Kösling explained. He is not wrong as the Centurions have the best rushing attack in the league with running back Madre London who averaged over 250 rushing yards per game in the regular season.

When talking about the upcoming game, Kösling stressed that his team will not underestimate their opponent, despite beating them twice in the regular season: “It’s a test that we take seriously. Although we beat them twice already, we won’t take this game lightly”.

“It’s going to be a challenge for my defense. The best rushing attack against the best defense in the league, that’s what the fan like to see”, Kösling added with a laugh.

The Frankfurt Galaxy Head Coach also touched upon the impact of nerves and other emotions in the playoffs: “[…] One bad day or one great day can by Mr. London [Madre London] or something doesn’t work on our side, and we look silly. I believe we’re the better team and I believe that we will win this game as long as the nerves don’t get the best of us”.

At the end of our conversation, Kösling had a message to the fans: “Thank you for supporting us. We need a loud crowd! There are a lot of emotions when it comes to playoff-football, and we need the Purple Hell to make the opponent’s offense uncomfortable. You fans help us out if you make noise. Bring your trumpets, bring a loud voice and be ready to support us! We can win this together!”.

Just like the Frankfurt Galaxy, the Centurions prepared like every other week in the regular season: “We prepare the same every week”, Head Coach Heidelberg noted. He went on to explain that his team just thinks of it as “our next opponent”.

As far as practices go, Heidelberg stressed the hard work and dedication his team puts in to improve every day: “We try to improve every practice through hard work and effort”. This hard work should translate to the game on Saturday as the Centurions will have their hands full with the potentially best team in the European League of Football.

When asked what he thinks about the Frankfurt Galaxy, Heidelberg had a quick answer: “Frankfurt is the best team in league”. Still, the Centurions will give it their all to beat the Galaxy and advance to the first ever European League of Football Championship Game. Heidelberg stressed that every single player must step up to perform as a unit: “It’s a team effort”.

When being asked what his own team must do for a win, Heidelberg quickly referred to penalties: “No foolish penalties”. In the past, penalties were the reason a lot of Centurions drives ended, and games were lost. Statistically, the Centurions had 82 penalties that accounted for 688 yards. Their opponents averaged only 57 penalties which accounted for 489 yards throughout the regular season.

Being an experienced Head Coach, Heidelberg knows how important it is to play all-around solid football to win in the playoffs: “We must play well in three phases: offense, defense, special teams”. He added that turnovers are lethal and what he expects from his team in this regard: “No turnovers. Zero!”.

When it comes to the game and what the fans can expect from the Centurions, Heidelberg had a clear message at the end of our interview: “Our fans will see a team focused and ready to play hard”.

With the game kicking off tomorrow at 2:45 p.m. CEST, the first ever champion of the South Conference will be crowned. Both teams prepared for this opportunity and will give it their all.

Tune in on ProSieben MAXX, LIVE NOW or on your Gamepass to not miss any playoff-action from the European League of Football.