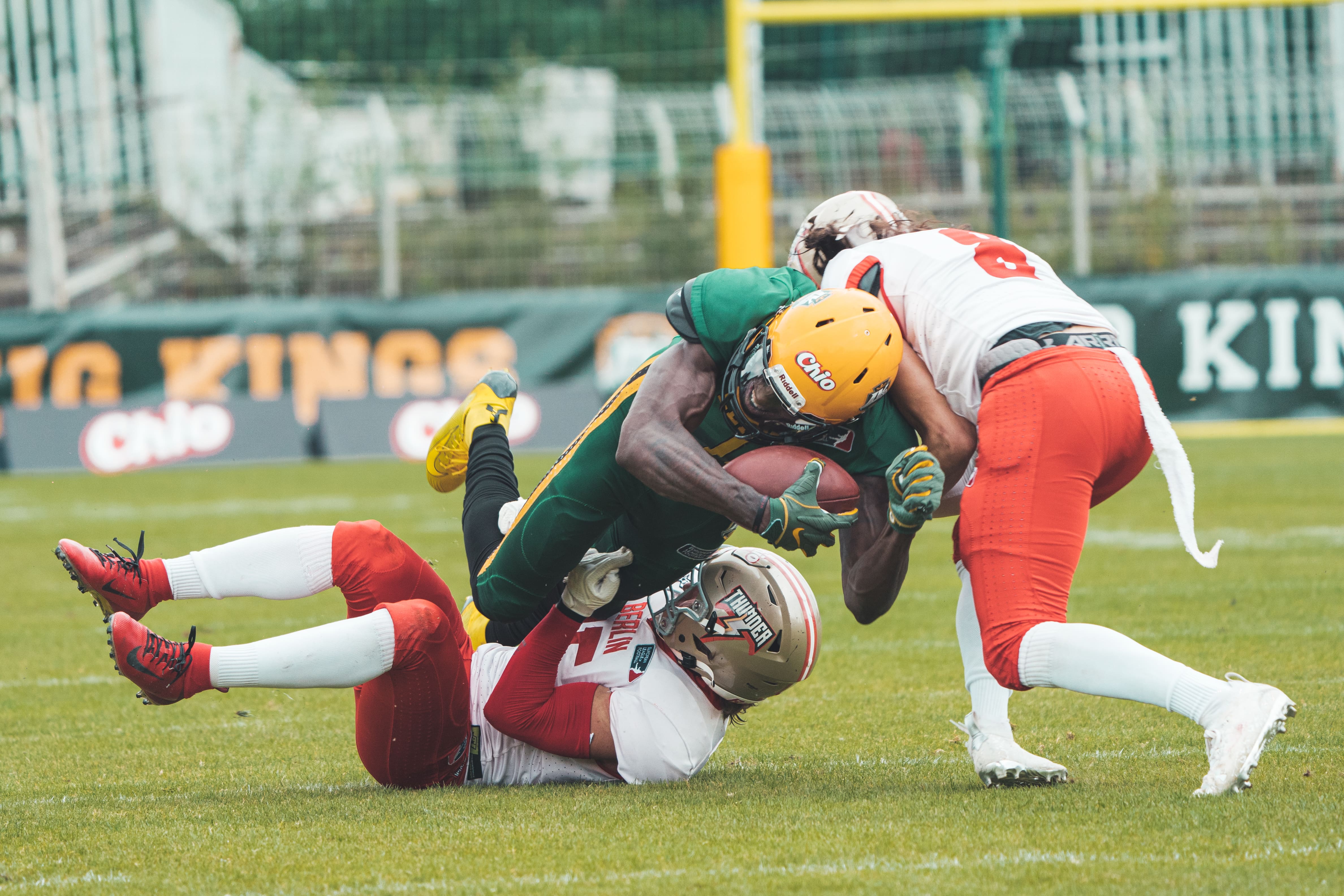 The Leipzig Kings hosted their rival, the Berlin Thunder, in an exciting conference matchup to take the next step in the race to the playoffs. The home team finally had his starting quarterback Michael Birdsong back in the lineup who had a great game. With sunny weather, warm temperatures and a loud crowd of fans, the game kicked off at 3 p.m. CEST.

The Leipzig Kings decided to receive the kick-off and start the game on offense. After a shaky start, the Kings punted the ball away to the Thunder. Berlin’s backup quarterback Zerbe had a great run on a fake which took the Thunder into the redzone. After a tackle for loss by Kings’ defensive lineman Kyle Kitchens, the Thunder went for it on 4th-and-25. Although they got another chance to put points on the board because of a defensive pass interreference against wide receiver Jones, the Kings’ stopped the Thunder and forced a turnover on downs. The Kings continued to pass the ball with Birdsong back on the field. He distributed the ball to Dablé-Wolf, Awini, Knuettel and other receivers all over the field to bring his team in good field position.

At the beginning of the second quarter, Birdsong found wide receiver Knuettel for his fifth touchdown of the season on a deep route in the endzone. After the PAT was no good, the Kings were on top with the score set at 6-0. The Kings defense stepped up and put pressure on the quarterback with a sack by Buffet which forced the Thunder to punt the ball away after a short possession. Then, a great catch by Kings’ receiver Knuettel set up running back Jason Aguemon for his first touchdown run of the season. After the two-point conversion was good, the Kings were on top 14-0. The Thunder were under pressure offensively once again as Kitchens came in with another tackle for loss. However, backup quarterback Zerbe found wide receiver Jones on a back-shoulder fade in the endzone for the score. After the two-point conversion was successful, the Thunder only trailed the Kings by six points with the score set at 14-8. On the Kings next drive, running back Aguemon got plenty of hand-offs again. Those runs set up a deep pass by Birdsong to Alpha Jalloh for the score. After the PAT was good, the Kings were on top 21-8. The Thunder were forced to quickly punt the ball again back to the Kings. On the Kings next drive, Birdsong found a receiver again in the endzone. This time, he found Knuettel on a corner route deep in the endzone for the score. The Thunder quarterback Zerbe then threw an interception. However, Leipzig’s quarterback Birdsong lost the ball on a strip-sack just moments later to end the first half with a score of 27-8.

At the beginning of the third quarter, the Thunder put Stitt back in at quarterback to possibly come back into the game. Berlin was still forced to punt the ball on their first drive which was followed by a great return. Both teams were going back and forth during the third quarter and tried to move the chains. After the Kings missed a field goal, Thunder’s running back Crawford fumbled the ball to set up another drive by the Kings. However, the Kings were still forced to punt the ball. At the end of the third quarter, running back Schneider checked into the game for Leipzig.

To start the fourth quarter, Birdsong tried to pass down the field on back-to-back pass attempts but could not find his receivers. After Thunder linebacker Nasri was ejected from the game because of roughing the passer and leading the hit with his helmet, the Kings kept on feeding Aguemon the ball who ran into the endzone for his second score of the day. After the two-point conversion was good, the Kings were on top 35-8 with a lot of time left to play in regulation. On Berlin’s next drive, Stitt was intercepted by Jalloh. As the Kings were back in possession, the Thunder forced a fumble and recovered the ball. After moving the chains into Kings’ territory, quarterback Stitt rumbled into the endzone for six. After the two-point conversion was good, the new score stood at 35-16 with the Kings still dominating the game. Then, the Kings started to struggle offensively and were forced to punt the ball. As the Thunder started their next drive, backup quarterback Zerbe was lined up at wide receiver and hauled in an impressive catch that set up the Thunder in the redzone once again. This time, Stitt pushed the ball in the endzone for a second time. After the two-point conversion was good, the new score stood at 35-24 with almost nine minutes left in the fourth quarter. The Kings tried to keep the clock ticking on their next drive but were forced to punt again. As Jones received the punt, he pitched it back to a teammate in the endzone which resulted into a safety. The new score stood at 37-24 with the Kings on top by 13 points. Leipzig was then trying to take time off the clock with a balanced mix of running and passing plays. As Knuettel catches the ball on third down to move the chains, he slides down to keep the clock ticking. On fourth down, quarterback Birdsong found his tight end once more to move the chains. On 1st-and-goal, Birdsong kneeled down to expire the game clock for their second win of the season.

The Leipzig Kings move to 2-4 after this dominant performance with a 37-24 win over the Berlin Thunder. The Thunder now move to 1-5 and sit at the fourth seat in the North Conference. The Kings now sit right behind the 3-3 Wroclaw Panthers who lost against the 4-2 Cologne Centurions today. Next week, the Thunder will enjoy a bye-week to refocus and to recharge their batteries. The Kings will matchup against the Stuttgart Surge in an interesting interconference game on Sunday next week.