The Kings win after coming back from a 17 point deficit! 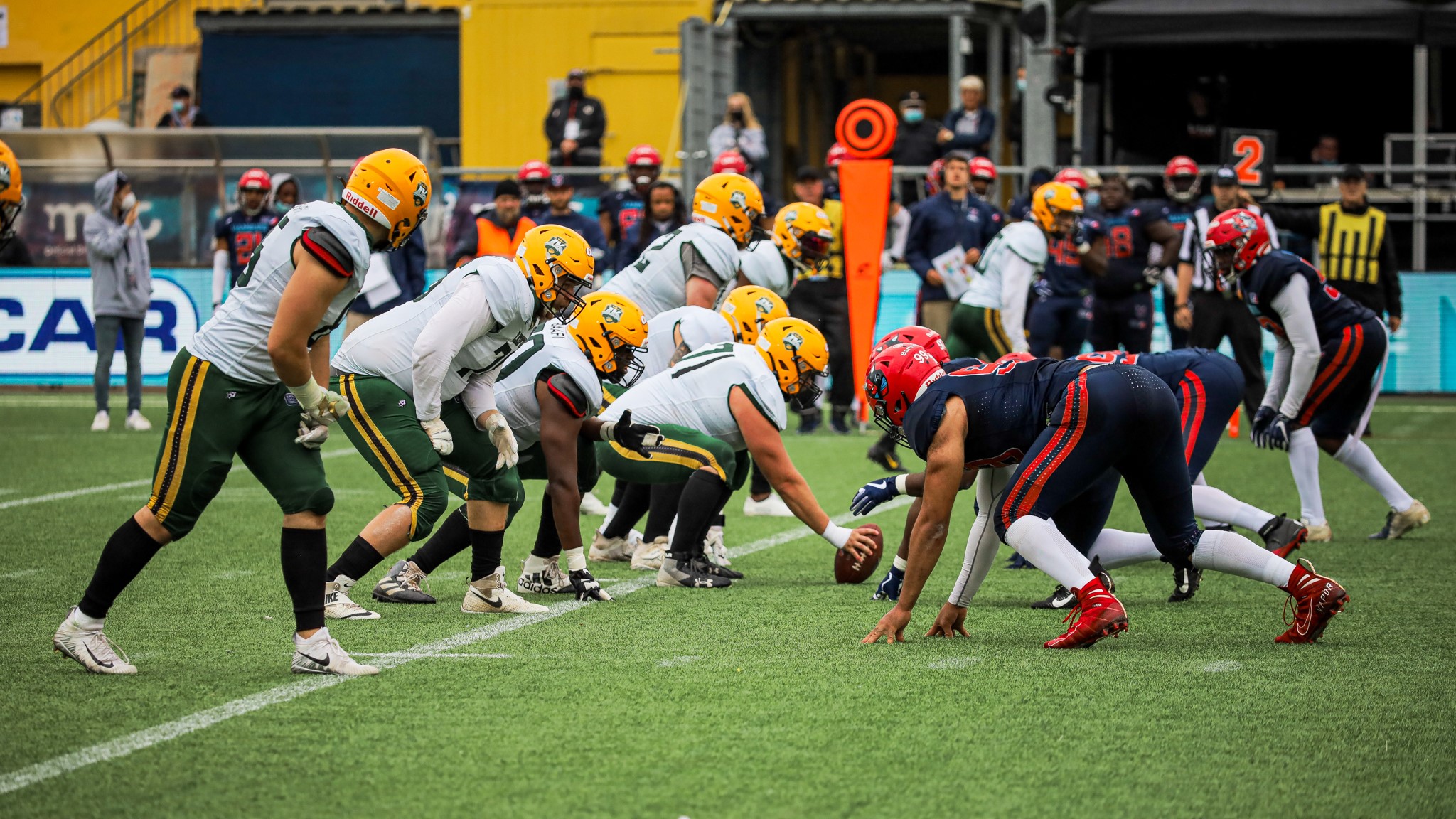 The Kings offense and the Hamburg defense at the line of scrimmage. Credit: Mariann Wenzel

It was the last game for the Hamburg Sea Devils coming into week eleven of the regular season. The playoffs as well as the homefield advantage were saved, now everything that needed to be done was to keep the blood flowing, get guys a chance who didn’t see the field earlier this season and take some momentum with them.

The Leipzig Kings on the other hand had pressure on their mind. With the Panthers winning the game in Hamburg last week and winning in Berlin two hours earlier, they knew something needed to be done.

The Stadion Hoheluft welcomed 1625 visitors to enjoy a game where the weather was rainy for a bit, then changed to a partly clouded sky. The Hamburg Sea Devils rotated. Quarterback Salieu Ceesay got his first start, leading the Sea Devils under center.

The first drive of the game began defined the word „Statement“. Hamburg Sea Devils began to roam over the Leipzig Kings in a dominating fashion. After a good return by Rogers, Ampaw started off an incredible run to secure a good position inside the Leipzig’s 35-yard line. First down after first down, Ceesay found Nill to get into the five and Ampaw running it into the endzone fort he score. Andersen scored the PAT, getting the Sea Devils upfront with 7-0. It looked like the Sea Devils had a plan. Now, it was the Kings' chance to respond. Aguemon started the game, but was soon replaced by Jaleel Awini at running back as Aguemon struggled with hamstring issues. The defensive line as well as linebacker core, in person of Matthias Spiegel was able to tackle for loss and win the first fight. The Kings had to punt, and the Sea Devils were hungry for more, having Ceesay under center paid off early. Ceesay’s pocket presence, his ability to scramble for more yards and view were working in favor of the Sea Devils. But without the connection working on third down, Andersen had to try a field goal from 34 yards, unfortunately missing the posts right.

Starting from 34-yard line, the Kings got more into the game, involving Awini as a running back, Anthony Dablè-Wolf and Birdsong as a dual-threat quarterback. The American balled out and showed promise. After two dropped passes, the Sea Devils profited of a bad read and possible misconception by Birdsong who threw an interception right into the hands of free safety Curtis Slater.

Ceesay got another chance to go downfield. After using Ampaw effectively in the run game, Ceesay found his receivers Tobias Nill and Madin Cerezo regularly. All it took was chances. Madin Cerezo was sent into a long pass by Ceesay, getting a clear pass interference call against the Kings and cornerback Henrique Roedion and ending the quarter shortly after.

On second-and-goal, Ceesay checked his first read, Tobias Nill, who came in sight with a quick slant from slot position, caught for the touchdown and PAT secured by Andersen fort he 14-0-lead. A harsh beginning for the Leipzig Kings, but not enough to bring the heads down. Even though the next drives brought nothing fancy fort he Kings, and defensive players of the Sea Devils were stepping up, the Kings managed to get out of sticky situations with happy endings. The Sea Devils got the ball back and Ceesay managed the game. Ceesay and Ampaw were workhorses for that Sea Devils offense, getting the Sea Devils into the Leipzig half. On fourth down, Andersen gave it a shot. From 59-yards, the Danish kicker wanted to kick a field goal and it had the length, making it a new league-record and giving the Sea Devils a 17-0-lead. The next drive brought nothing new for both sides of the ball. On the Leipzig side, the pressure surely got a bit stronger. Kitchens, Zetterberg and Leota kept the Sea Devils offensive line at short breath more often. The half time gave the Kings time to adjust.

And they used the time. Dablè-Wolf got involved and Birdsong had more time to figure out a way to catch this rotating Sea Devils defense off-guard. Trying to give more players short yardage gains, the Kings showed what they were capable of. While the first drives didn’t work for both teams, with enough time to use, the Kings were now marching down the field, giving momentum to all the involved players. Dablè, Knuettel and Yoshihito Omi were targeted through the air, Awini and Jalloh handled the ball on the ground. Four minutes left to play in the third quarter, Jalloh got the ball on a pitch from birdsong over the left, breaking tackles and rushing into the endzone for the first score of this Leipzig offense of the day. At 17-6, the show began to unfold. Not only the offense got into rhythm but mostly the defense balled out for the Kings. Kitchens had a day, being an absolute force in the pass rush. Ceesay had not enough time to go through his reads. Jalloh returned a punt on fourth down to the 47-yard line, giving the Kings enough room to capitalize. Jaleel Awini who got used as a wide receiver and quarterback earlier this season showed his athleticism as a pure running back, getting back-to-back first downs. Furthermore, Birdsong was experienced enough to lead his team downfield, finding Templar for the first time, getting an important first downinside the 30-yard line of the Sea Devils just ending the third quarter.

On second-and-ten, Birdsong knew were he wanted to go to: Timothy Knuettel. Experience showed off here, going against a rotating defense of the Sea Devils. Birdsong found Knuettel on a seam over the middle, getting the 17-12 score ready for another one. The Hamburg Sea Devils rotated on offense as well as defense, making it hard for them to win even the smallest battles against this loaded Leipzig team. The crowd was still loud enough to get some security on defense for the Sea Devils, managing to get intoimportant fourth downs as well. Not knowing how to handle the pressure, less experienced players were thrown into cold water. For the Kings, Birdsong had ice in his veins, finding Yoshihito Omi, their tight end Doroshev, Baumer and even running and jumping for new first downs to keep the drive alive. With the momentum in favor of the Kings, as well as the crowd getting louder and louder, this battle was about to reach its height. Just with the two-minute warning done, Birdsong found Knuettel again over the middle, reaching the one-point favor. With the two-point attempt failed, the Kings were up 18-17 with 1:32 minutes to go. Nearly impossible for the Sea Devils to get back into the game. And this Leipzig defense balled out another time, leaving the Sea Devils with no time to score. With the last whistle, Leipzig players were storming the field to celebrate. Nothing less than pure joy for the Saxons.

The Kings and Panthers are now 5-4, going into the last regular season game in Leipzig facing each other. The comeback meant nothing less than happiness and confidence for the upcoming game. For the Sea Devils, this one-week pause will be used to get things sorted out, rest bodies of starters and scout the possible contender in the semifinal: Panthers or Kings. The next week will bring clearance.