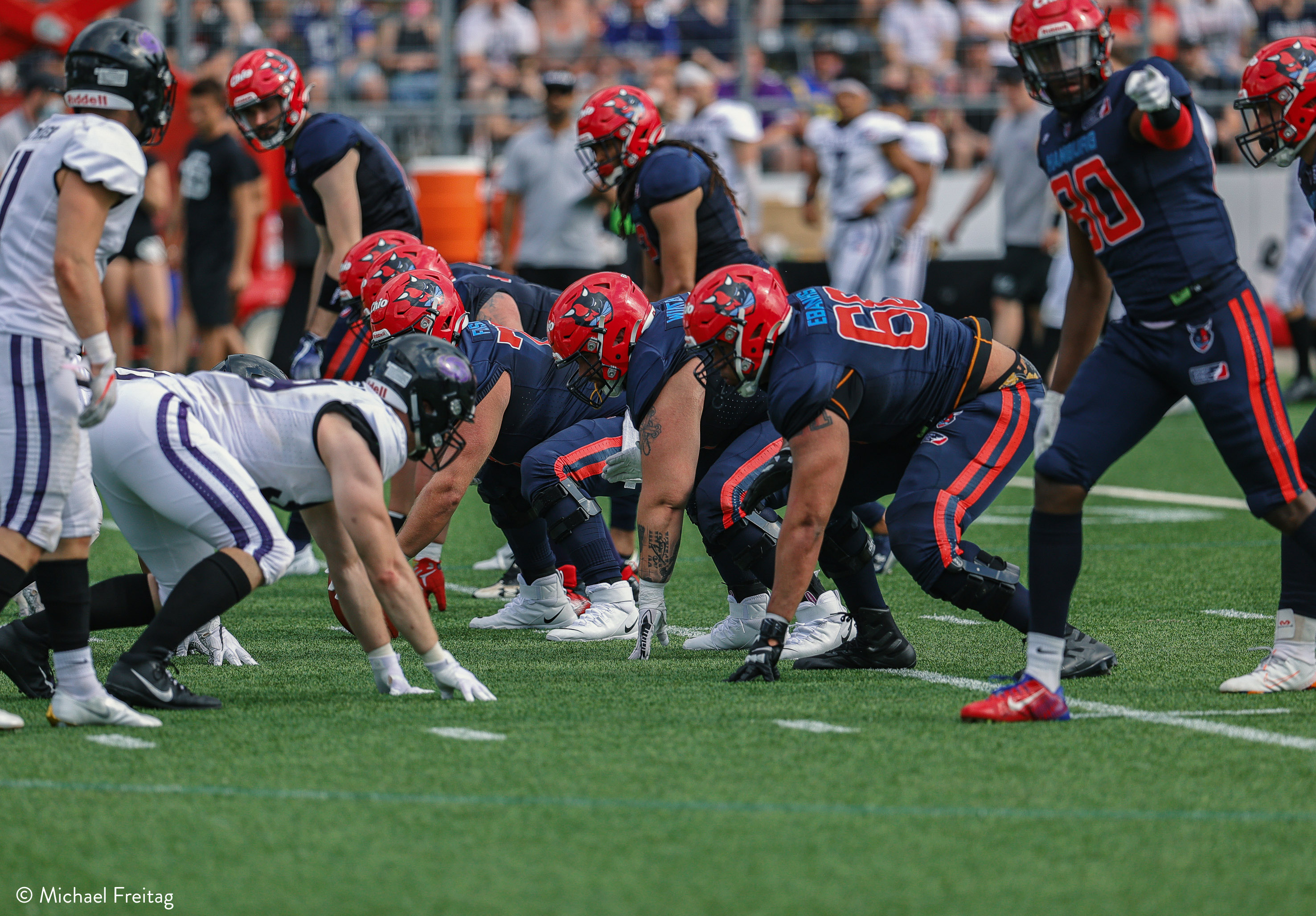 The Hamburg Sea Devils and the Frankfurt Galaxy balled out and put on a show on the artificial turf in the Stadion Hoheluft in Hamburg. The Sea Devils wanted to prove their quality in the heat of the sun in front of 1600 fans. Even the Galaxy brought enough supporters to help them on their way to their possible first win.

Both teams tried to anticipate and scan the opposing team. While Galaxy took the game in the first few minutes with short passes, the defense of the Sea Devils was courageous enough to make important stops. A missed field goal from over 30 yards got in the way of Frankfurt reaching the early lead. While Frankfurt had a lot of time with their offense on the field, they could not finish their work. An interception by strong safety Marloshawn Franklin Jr. helped the Devils to turn the momentum around.

Right after that change, Jadrian Clark turned the ball over as well. Joshua Poznanski intercepted the Sea Devils signal-caller by coming out of his own endzone. A big stop on third down by Sea Devils linebacker Bombek helped to only allow Frankfurt to kick a field goal. In these couple of minutes, it was obvious that both defenses dominated the game. A forced fumble returned for a touchdown by linebacker Ambroise Mati helped the Sea Devils to get on top with 7-3 on the scoreboard. The Frankfurt Galaxy were utilizing their running back Gennadiy Adams well who ran for 74 yards total and one touchdown right before halftime. A missed PAT helped the Devils to stay close with two points behind.

Further and further, the Sea Devils worked out how to use the running game and convert long downs with a great passing game as well. Sea Devils tight end Adria Botello Moreno helped to haul in one touchdown in the third quarter with a beautiful ball delivered by quarterback Jadrian Clark. Both defenses did their best to not let the quarterbacks and running backs get enough air to breath. Both defenses were consistent and sent constant pressure.

With the Sea Devils in front by five points (14-9), both teams started to feel the heat and turned up their game once more. Especially Galaxy quarterback Jakeb Sullivan and wide receiver Anthony Mahoungou were working well together. As the game moved closer and closer to the end, the Galaxy delivered a stunning pass from Sullivan to Schwartz. Important for the Sea Devils: A missed two-point conversion by Frankfurt and a solid performance by the defense helped the Sea Devils stay close with one point behind. Xavier Johnson, running back of the Sea Devils, was able to run for two important first downs in the last two minutes, putting kicker Phillip Andersen in the perfect spot. The Danish player had four seconds left when he kicked a beauty for the game-winning field goal.

The game was a defensive battle. Both defenses did their job to hold their opposing offense to under 20 points. Regarding the constant pressure, both play-callers were able to put their players in the best possible spot. An unfortunate missed PAT, one missed field goal, and a failed two-point- conversion made the difference at the end of the day. With both teams not reaching their full potential, the 17-15 win by the Sea Devils was a great test for both teams. The Hamburg Sea Devils can now recharge their batteries in a bye week, while the Galaxy meet the Surge in a southern conference showdown.