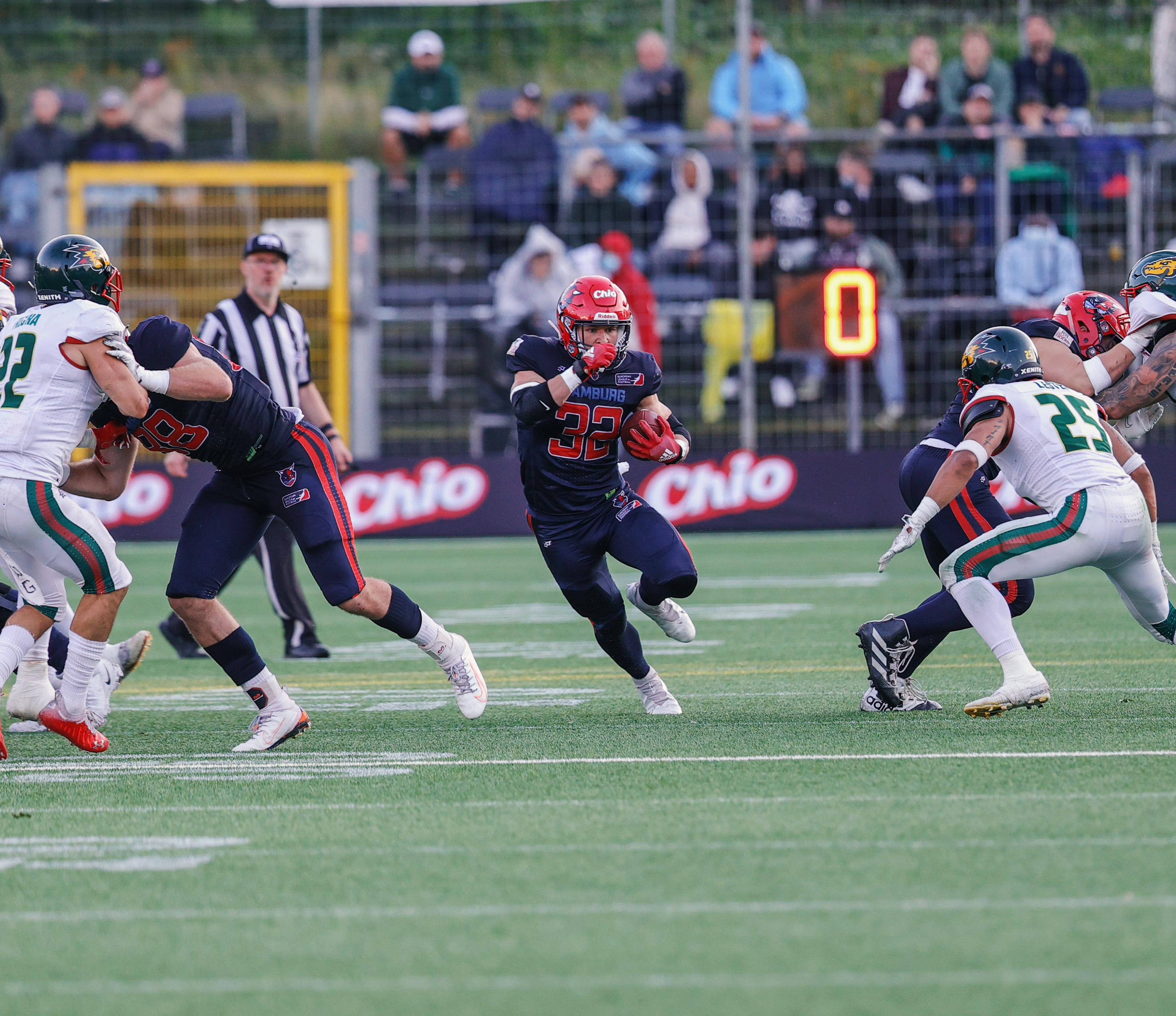 A stormy and windy afternoon in Hamburg promised a hard fight with run heavy attacks. With Miguel Boock and Benjamin Mau out for Hamburg, but Kasim Edebali back in action, the Sea Devils had a hard opponent in Barcelona who camet o Hamburg with huge confidence. The Dragons won last weeks game against the Thunder in dominating fashion. The passing attack as well as the athletic defensive backfield were an important to keep an eye on for the Sea Devils. Sun and rain changed minutely as the game kicked off at 6 p.m. CEST.

With the Hamburg Sea Devils kicking off the week seven and starting the second half of the season, the game showed quickly what to look out for: Defense. Both defenses stopped the opponents in critical situations, making it a defensive sided game for all spectators and fans. Bombek and Edebali were showing pressure up front while the secondary of the Sea Devils defended passes regularly. Giving Jadrian Clark nowhere to throw and with Xavier Johnson out, the Sea Devils were offensively limited early. Shortly into the game, Jadrian Clark threw a nice ball to the left which was deflected and landed straight into the hands of Dragons defensive back Lukas Masero. From there on, the game was a defensive showdown. Both teams struggled to get going. With the end of the first quarter, the Sea Devils worked out more and more how to handle the line play. Unfortunately for the Sea Devils, left tackle Keanu Ebanks was hurt which forced Dennis Kenzler to start at left tackle.

Starting the second quarter, the Sea Devils, trusted in their kicker Andersen early, what happened to be a good idea. Andersen brought the Sea Devils in front from 43-yards on a field goal.  Both teams were pressured early on, having no room to breath. Barcelona showed some promise with a nice return by Jéan Constant to the 27-yard line with an added tripping call against the Sea Devils on the return. Not converting three tries, the Barcelona Dragons decided to kick a field goal from 27 yards which helped to even out the game. Both Andersen and Tavecchio had great kicks as well as nice field goal tries. Trusting the run, Julian Ampaw was the go-to guy for the Sea Devils. Coming on with 21 personnel, the Sea Devils had a mix of short passes and runs to offer using Ofori, Madin Cerezo and Rehder to move the ball. In the meanwhile, Fensch moved to left tackle. After a couple of bad throws, Jadrian Clark missed Jean Claude Madin Cerezo with Niko Lester picking of the ball and running down the field for over 80 yards, resulting in a pick-six. Giorgio Tavecchio scored the PAT right after. With four minutes left in the first half, the Sea Devils were behind 3-10. After a short bump, the Sea Devils got the ball back on the 25-yard line and moved quickly with a 20-yard run over Ampaw as well as a 15-yard pass to Rehder. Shortly after, a 44-yard touchdown pass from Jadrian Clark to Madin Cerezo helped the Sea Devils to be right back in the game. Andersen converted the kick and the Sea Devils set the scoreboard at 10-10. Then, it was the Dragons turn to take the momentum shortly before halftime and Edwards delivered. Two big passes and a good run later and the Dragons were at the Sea Devils 25-yard line to score with under one minute left. Bringing the pressure, the Dragons were hold to a 42-yard field goal try, that was changed to a new first down for the Dragons on the 12-yard line after a foul by the Sea Devils defense during the missed kick. Edwards used the chance and run in for a touchdown over the middle as well as Giorgio Tavecchio converting the PAT to a 17-10 lead with just 15 seconds to go in the first half.

With the Sea Devils receiving the ball, the Dragons were on time to provide more upset material. Early on, the offense of the Sea Devils had problems converting the ball, being pushed into long distance situations. Since both defenses were coming up in the best situations, the special teams were an important part of this game. An interception by Justin Rogers was called back after two penalties off-set each other. The Dragons were then hold into their own half more often with a huge sack by Kasim Edebali inside the 20-yard line of the Dragons. Apart from special teams, penalties were playing an important part as well. With Jadrian Clark struggling to find his receivers, he found Niko Lester for his second interception of the day over the middle. Right after, both Lester and Kasim Edebali were hurt and had to leave the field. With a fumble forced by the Sea Devils defense, the mood of the crowd, of the teams and of the spectators changed rapidly. It was an exchange of blows. Andersen converted an easy field goal once again, making it a 13-17 game. Getting the Dragons to punt, the Sea Devils were on another run to score. Despite Clark struggling with the pressure, Andersen was there to safe the day on a 32-yard field goal attempt, helping the Sea Devils get closer with just one point.

Starting in the fourth quarter, the Sea Devils were defending their own half with just one point behind at 16-17. The crowd was ready to heat up the stadium. Bringing pressure, Sea Devils Rogers picked the ball off at the 22-yard line. Barcelona having to play with some injuries on defense themselves, the Sea Devils moved the ball well. With a lucky holding call on 3rd-and-20, the Sea Devils had the chance to get back into the flow. From 28-yards out, Hummel got the ball and ran it in. Unfortunately for the Sea Devils, a holding call ruined the play and Andersen had to kick another field goal, making it 19-17. The defense helped the Sea Devils to climb back up and get the ball just seconds later again. Starting from the own 25-yard line, the Sea Devils got their crowd back in the game and forced the Dragons to punt. From the 50-yard line, the Sea Devils were searching for first downs, four minutes to go. Andersen took the ball at the 35-yard line, kicked his next field goal for the 22-17 lead. Just minutes before the end of regulation, Edwards had the chance to lead his offense down the field another time but had an impressive defensive front against him. On a long fourth down with the game in his hands, Edwards scrambled towards the Barcelona sideline, throwing a desperation pass that landed right into the hands of Sea Devils linebacker Ambroise Mati. Victory formation, game-over.

The crowd, the tight air. It was stormy night in Hamburg with the Sea Devils getting their sixth win of the season, still unbeaten. Next up are the Frankfurt Galaxy who will try to take revenge. The Dragons will now try to tame the beast from Cologne. Regarding the win, Andersen was leading his team in scoring, having scored 16 of 22 points. You know what they say about hard games? This: “But can you do it on a cold rainy day in…Hamburg?”