European Football has a new home. The European League of Football brings new ideas, new faces and first and foremost: The European Players a chance to present themselves on TV and in stadiums. German, Polish and Spanish Football evolved over just one year into a spectacle. 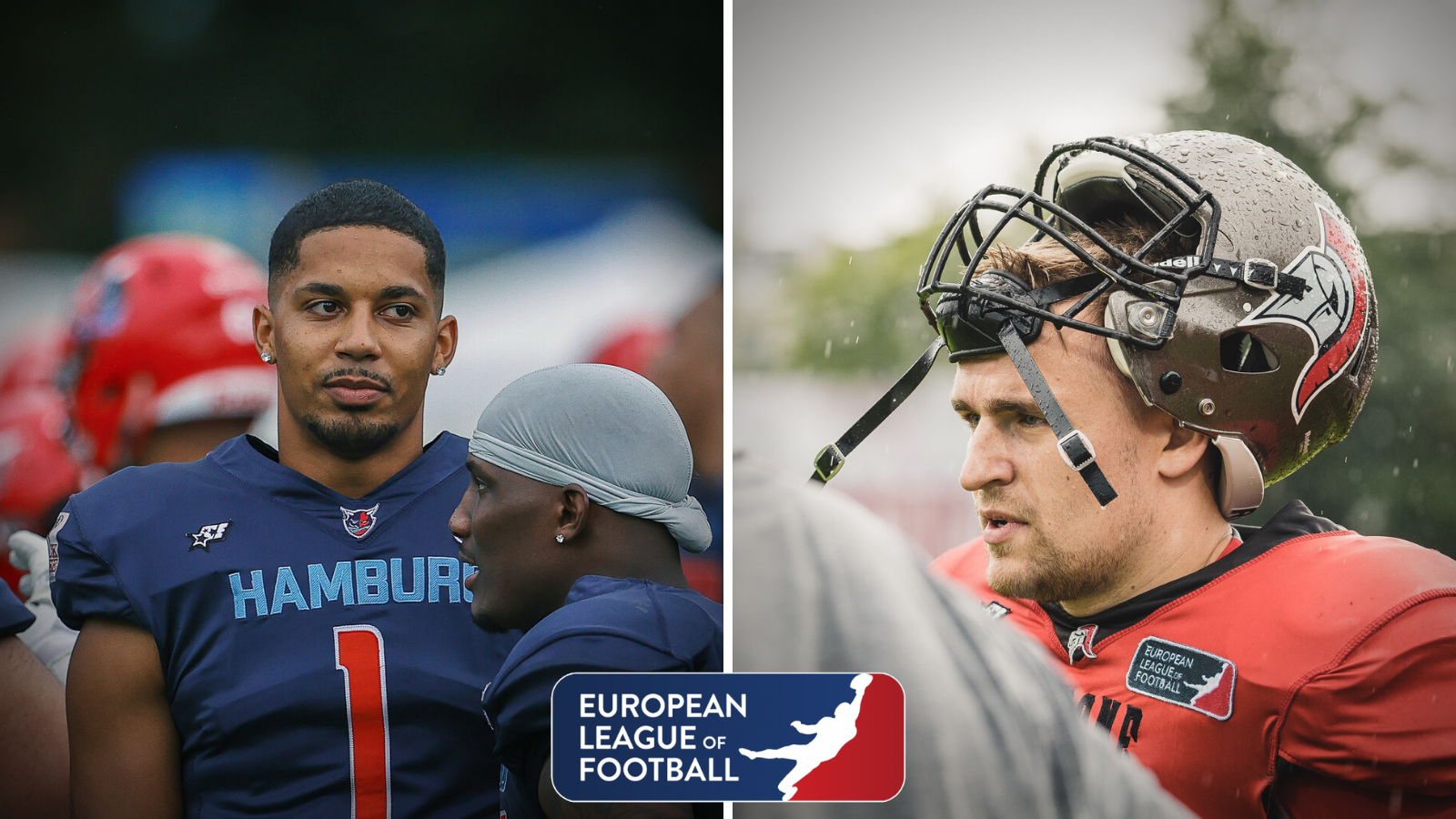 Salie Ceesay (left) and Jan Weinreich (right) are ready to take the next step in the 2022 European League of Football season. ©Michael Freitag/

More teams means more local players that have a chance to present themselves.

With Jan Weinreich, the only homegrown starting quarterback of 2021 in the European League of Football summed up a big season in 2021. His Cologne Centurions managed to make the playoffs, with just a few months of preparation.

Weinreich took over the starting job against US-American quarterback Danny Farley in just the first game of the season. After that, he racked up 1809 yards passing, 16 touchdowns, 180.9 average yards per game, with just six interceptions in ten games. Behind him: Alexanders Frisch and Jannik Nowak as backups, a just German quarterback-trio. After re-signing the contact just a week ago, the Centurions seem to have their long-term solution with Weinreich in place to start another playoff-run. When asking Weinreich about the European Quarterback role, he had this to say:

"When I think about it, it is something very special to be able to play this position as a European at such a level. However, I see myself as a normal player and I don't define myself by my nationality, but by my performance - just like any other European in this league“, explained Weinreich about his position.

Weinreich takes another approach in the offseason:

Top German quarterbacks for the European League of Football

Another one of those quarterbacks is Sea Devils quarterback Salieu Ceesay. With just 22 years of age, he is seen as one of the biggest talents in the European League of Football. After spending three years at a high school, coming to the College level as a four-star recruit in the US, he went back to Germany in 2019 and received some playing time with the Sea Devils this year in the European League of Football behind American quarterback Jadrian Clark.

"To play as a European QB in the ELF is a huge honor. I know more European players will make it in the future. To be one of the first is definitely an honor. At our position, you usually only see American quarterbacks“, he told us.

With 14 completions in 28 attempts, 134 passing yards, one throwing touchdown and one rushing touchdown, as well as 91 rush yards, there are not many quarterbacks in the league with those throwing and running abilities. A young, athletic quarterback on the march to get a starting job in the League.

"Full time starter in the ELF"

"Ceesay is an athletic quarterback who is too good for the Sea Devils to keep on the bench which is why he saw plenty of action during the 2021 season. Outside of his electric running ability, he is a smart passer with sound decision making. Possessing good armstrength he can push the ball downfield and drive it into tight windows. Inconsistent accuracy can cause him to miss throws. Ceesay offers as much offscript prowess as any quarterback in the league with his scrambling ability and is still young giving me confidence in predicting that he will soon be a full time starter in the ELF.“, Football Scout of Sports Illustrated Lorenz Leinweber commented on Ceesay.

Now, both quarterbacks are heading straight into their first European League of Football off-season.

"My off-season consists of first two to three weeks of recovery, a lot of cardio, a lot of stretching, little weight. Now I slowly go into the load phase, heavy lifts four to five times a week. I focus on getting stronger, then comes the athletic phase where I go on reps with less weight, that's also the time where I'll go on the field, throw again, work on my speed, do agility training. In the preseason, you meet with your teammates again“, Ceesay described, while Weinreich seeks power with a little spice in his approach: "At the moment I am focusing on my work and my studies. In terms of sports, I try to keep fit and healthy in my free time through weight training and other sports. From January on the preparation will be more intensive“, Jan Weinreich added.

Interesting to see which home-grown quaterbacks will make thenext step in the upcoming season, while the group of European quarterbacks is still a small circle, also talking to each other. „I am definitely in contact with many European quarterbacks and we also exchange ideas. But it's not somuch about plays or tactics. I keep in touch with the other quarterbacks andget feedback or advice from them.“, Ceesay said optimistically.

With the growth of European Football, more and more talented athletes will make their way into the European League of Football, with Weinreich and Ceesay only being the pioneers of their craft to lead the way for future players.