The European League of Football opened its All-Star voting on Monday with over 250 players in place to receive the honorable All-Star mention. We had a look at some possible front runners of each position. 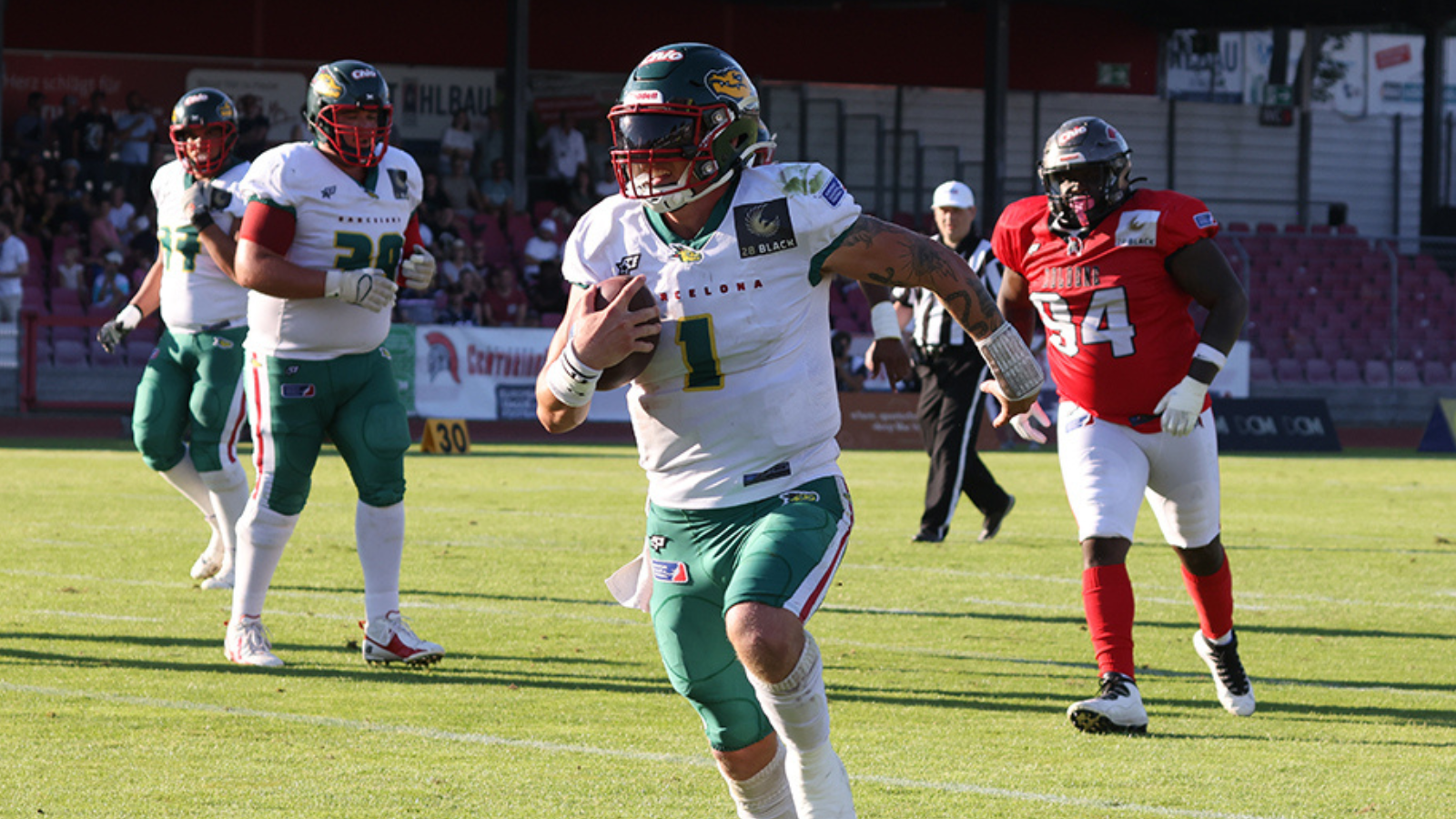 Zach Edwards on his way to the All-Star team. © Barcelona Dragons

There's probably no way around quarterback Zach Edwards again this year. Hard to bring down, he led his team to the top of the Southern Conference this year. He is the engine of the Barcelona Dragons offense. He leads the stats among quarterbacks with 2,448 passing yards and 25 touchdowns. He is a force to be reckoned with.

His teammate follows promptly. Kyle Sweet has just absurd statistics. He currently leads the list of wide receivers with over 400 yards ahead of Quinten Pounds. Twelve touchdowns on 132 targets do the rest. This guy is gold for the Dragons.

Not only is he the leading rusher, but he's also a hot candidate for the MVP throne. Sea Devils Running back Glen Toonga already cracked the 1,000-yard mark, has 16 touchdowns which is three more than his quarterback Salieu Ceesay (13). Against some teams, he took the reins himself.

Even though he was hurt some part of the season, Vikings athlete Adria Botella Moreno might be one of the most complete tight ends in the league and definitely a front runner for the best tight end. His size and athleticism make him the perfect red zone thread who is also capable of making plays in the mid and wide range.

He might be the best left tackle in the league: Sven Breidenbach. The veteran proved this year how a left tackle has to be played. Size, athleticism, and discipline distinguish Breidenbach, making him arguably the best quarterback protector in Europe for his beloved Rhein Fire.

It could be the deepest position group in the All-Star selection. It's hard to know who you'd want to pick. One stands out, however, and could even defend his Defensive Player of the Year award from last year. Former Kings defensive end and now Berlin Thunder standout Kyle Kitchens collected 25.5 tackles for loss and 12.5 sacks over the course of nine games. Unmatched.

The league's best defensive tackle usually runs under the radar. It was a tough call here between Zetterberg and Marc Anthony Hor, although Hor might have a bit more of an edge because of his impact. Hor dominated last season and is doing the same this year.

Zachary Blair stands out immediately, the middle linebacker has his defense in check, plays for an underdog, but may be the player that has the biggest impact on his defense. A strong player who showed what he was capable of last year in Stuttgart.

Keeping up as a veteran against young players and Americans? Not many can do that at this position. Moritz Thiele is one of the reasons why the Berlin defense is as dominant as it currently is. The 29-year-old corner back can keep up with the best of the best. He's rightly a hot candidate for the All-Star team.

He looks and plays like a pro safety. Kevin Fortes could also play tight end and has everything to bring to the table. The Hamburg Sea Devils player already caught three interceptions, and has no problems keeping up at this level, sets new standards for European Safeties.

With 8/8 extra points in Week 11, Eric Schlomm may not have the strongest leg, but showed his accuracy. This guy will kick every crucial field goal there is. After Andersen, the Hamburg Sea Devils has a kicker again.

Nimble and quick, Omari Williams has been the game winner often enough for Rhein Fire. As a safety and returner, he is indispensable. A kick-return touchdown against Hamburg set the tone for a good season.