Armstrong: “We just have to capitalize on things and get those turnovers” 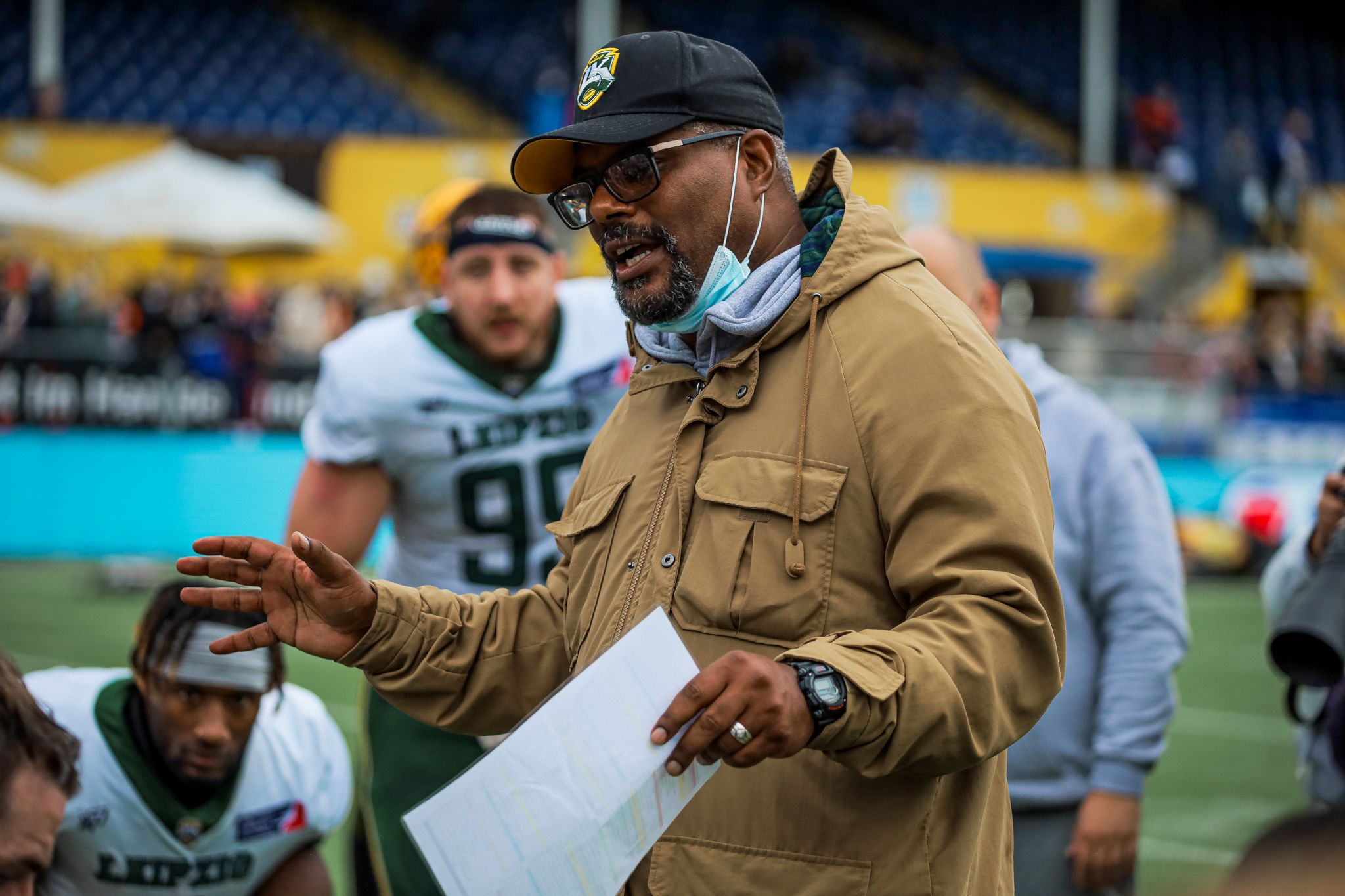 Kings HC Armstrong talking to his players after their win against the Sea Devils in week eleven. Credit: Mariann Wenzel

The 5-4 Leipzig Kings will face one of the toughest challenges all season on Sunday. Hosting the 5-4 Panthers out of Poland will make or break the season for the Saxonian franchise. Whoever wins the matchup on Sunday at 3 p.m. CEST will clinch the last playoff spot in the North Conference of the European League of Football.

In our conversation, Kings Head Coach Fred Armstrong pointed out that the Panthers had a tough schedule and faced a lot of adversity over the course of the season: "[...] They’ve played the hardest schedule of anybody. So, they got battle tested. They do a good job with that team”.

Armstrong also explained why the addition of wide receiver and running back KaVontae Turpin is so valuable for the Panthers: “I think them adding [KaVontae] Turpin, you know, just opens up [the offense] a lot more and they’re doing it, they’re using it. And it takes pressure off their defense too because they are defensively sound. They got a good defensive team”.

The Kings Head Coach further explained how he sees the matchup on Sunday, regarding additions of players and other changes: “I mean, nobody’s the same as when they played each other from before. So, we are not the same team we were in week two when we played them. And they are not the same. And I think adding [KaVontae] Turpin, it’s just like us with Alpha [Jalloh]. [If] you have explosive players, you have to watch what you do. So, it’s going to be a challenge one hundred percent”.

We asked Armstrong what he looks out for in the game against the Panthers. He immediately explained that his team cannot allow explosive plays on defense: ”I think the main thing, you just can’t have the explosive plays”. This will be easier said than done as Armstrong mentioned Turpin and other offensive weapons on the Panthers roster: “Offensively, they got dudes! You know, they have good slot receivers, they do a good job of mix with the run. You know, their game is really good right now. That’s what I would say”.

Armstrong went on to explain that the Kings will aim to create turnovers to put more points on the board: “We just have to capitalize on things and get those turnovers and get extra shots, you know. So, I think that’s what we’re concentrating on […].

The Kings offense will play to their strengths and not change because of their opponent’s defense, as Armstrong pointed out: “On offense, we just think we need to do what we do. And I think we’ll be okay. We have a little different approach. We understand what maybe other teams do, but we are going to do what we do and see how that goes for us”.

At the end of our conversation, Armstrong had a message for the fans of the Leipzig Kings: “I’m just ecstatic about the Leipzig Kings fans. We need you to fill the building up and cheer us on as you been doing! We know that there was some vacation time and we still had people in our stadium for those two games. But this game is important, and we need our fans there in full support. I appreciate the e-mails that I get from you, the response I get from you. What a great fanbase in year one and for people who love football. So, fill our stadium please!”.

After thanking the fans, Armstrong mentioned Björn Schulz, Benjamin Schmidt, Jacob Templar, Amanda Cubrias Vilariño, Frank Schmiedel, Tommy Graf, and Gerrit Meister who he wanted to thank for all their work. They all played crucial roles in the development of the Leipzig Kings organization, as Armstrong said: “Without them, nothing happens”.