Dark Horses of Week One: Ballhawks and sleepers

Some players in the European League of Football get a lot of attention. But what are players who could surprise in 2022? 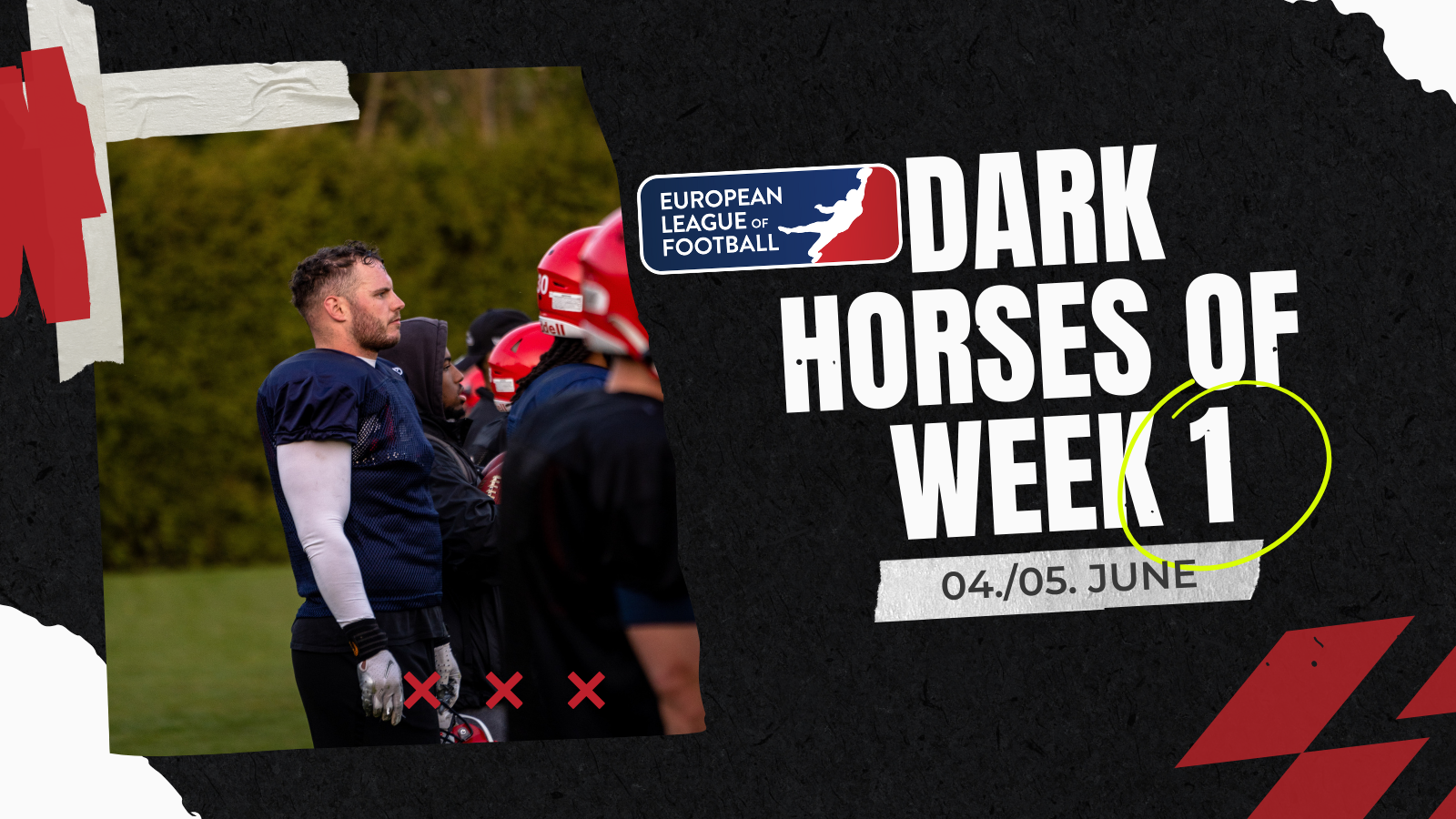 Dark horses of week one!

A dark horse is defined as a little-known contender. Someone that shows incredible skills, but in the end, was not expected to deliver like he has.

We had a few dark horses going into the inaugural season of the European League of Football last year. Based on his skillset and last year’s stats, athletes like Wael Nasri or Przemysław Banat were dark horses that rose to the occasion.

Nasri produced a total of 141 tackles, eleven tackles for loss, and four sacks in 10 games played for the Thunder. The middle linebacker is now under contract with the Frankfurt Galaxy and builds a strong linebacker corps with Louis Achaintre, Sebastian Gauthier, and Sebastian Silva Gomez – all of them are well known and could have a high production this year.

But a dark horse silently puts in the work and harvests its fruits in the first week of 2022. Let’s see who such a dark horse is in about a month time.

Flores gathered 286 yards, two touchdowns, and 21 receptions in nine games last year for the Dragons. The local wide receiver had Jéan Constant and Rémi Bertellin in front of him, but always helped the Dragons in crucial situations.

With Benjamin Plu, Kyle Sweet, and Jordi Torrededia coming in this year, Zach Edwards needs to spread out the ball to his weapons while the Dragons need to fix their run game. Flores is versatile enough to receive more than one important pass against the Stuttgart Surge in week one.

The Defensive End might be a direct key-factor on the other side of the line of Defensive Player of the Year Kyle Kitchens. The 25-year-old 1,89m tall, and 107kg heavy weapon brings everything a defensive end needs. Long arms and fast feet could surprise in combination with the use of his hands.

While it might be hard to pass Sea Devils’ tackles Francis Bongwalanga, Dominik Behrens, Dennis Kenzler, and Ron Mac Spiegel, Stanley alone could come with speed and shiftiness, getting less offensive line movement in his way than Kyle Kitchens.

Tim Hänni will stand on the opposite side of the field. The 25-year-old Swiss brings perfect dimensions with his 125 kg and 1,96m of height to accept the challenge of the European League of Football.

Hänni previously played for the Bern Grizzlies of the Swiss first division where he also put out an outstanding performance in the final game. He now brings his “A-game” to the biggest European stage. While Evans Yeboah brings power, speed, and technique, Tim Hänni is an equivalent with even more weight to handle for the opposing line.

The 191cm tall and 98kg heavy wide receiver started to play football at the age 13 for the Solan Chiefs in Sweden. He dominated ever since he played for the IMG Academy, Stockholm Mean Machines, and AIK. With Wang, Dablé-Wolf, and Eichhorn, Jallai has receivers on his side to take up the needed space for Jallai to flourish.

Versatile, experienced, and a ball hawk. Lars Steffen will be the safety trying to cover Jallai in the first match of the upcoming season. Steffen is a two-time German champion and knows his new defensive coordinator Dave Likins from his time with the Braunschweig Lions. An easy decision for both parties to partner up and work. Steffen’s experience will work well in a calm and successful environment.

The Stuttgart Surge linebacker corps looks solid. And that is probably an understatement.

Ogbevoen used his off-season wisely stepping up his game with performance and athletic coach Chris Mohr. 52 tackles, six tackles for loss, one sack, and one interception speak for itself in last season’s dominating Galaxy defense. Ogbevoen started twelve games but remained under the radar with both Gomez’ brothers, his new Surge teammate Knoblauch, and Sebastian Gauthier in the same line up. The 26-year-old linebacker could have his best season coming at the perfect time for the Surge.