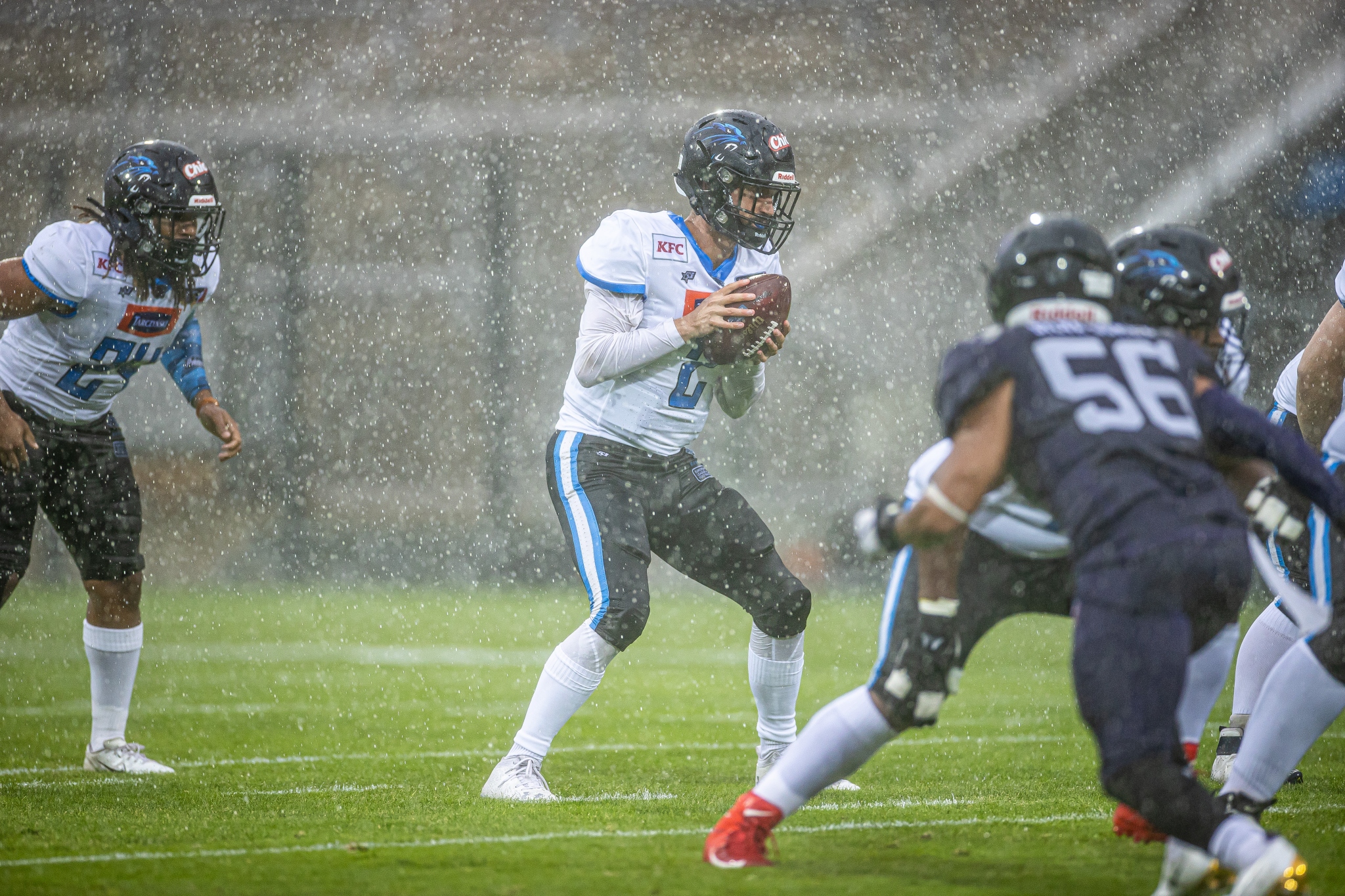 The 3-4 Leipzig Kings and the 4-3 Cologne Centurions are on a bye week, but the other six franchises in the league will battle it out once again in week nine of the regular season. The 1-5 Berlin Thunder will host the 6-1 Hamburg Sea Devils at home tomorrow at 1 p.m. CEST. The 6-1 Frankfurt Galaxy will travel to Wrocław to face the 3-3 Panthers in an exciting interconference matchup at 3 p.m. on Sunday. The third game of the week will be played in Stuttgart where the 2-5 Surge will host the 2-5 Barcelona Dragons at 3 p.m. CEST on Sunday as well.

Let’s have a look at some critical matchups this upcoming weekend.

The first game of week nine will be played in Berlin. As the Berlin offense gains their most yards on the ground, it will be important for them to establish their passing game as well to have a balanced offense. The Thunder offense averages 162.7 rushing yards per game which ranks second in the league. But they only average about 150 yards through the air. The Sea Devils defensive secondary is only the fourth best defense in the league when it comes to allwoed passing yards, although they are ranked first in every other category statistically.

The Berlin Thunder also have one of the worst turnover margins in the league with -1.0. This means that the Thunder have one more turnover than their opponent on average. Consequently, the Berlin offense has to protect the ball against one of the best defenses in the league to have a chance.

Panthers’ QB O’Connor vs. Guardians of the Galaxy 2.0

The Panthers and the Galaxy will meet for a second time on Sunday. In their first matchup in week three, Panthers quarterback Lukas O’Connor threw his first interception of the season and ended the game with four total picks. However, the Panthers still have the best passing attack and most efficient offense in the league, according to the stats: 296,5 passing yards pergame and 43,2 percent on third down conversions are the both top numbers in the league.

This time, the Panthers will probably look to keep the pressure off of O’Connor with possible roll outs or short passes. Their newly acquired wide receiver and running back Kevontae Turpin could also play a big part of the gameplan. In my opinion, this matchup comes down to the performance of Panthers quarterback O’Connor and their offensive production overall against one of the best, if not the best, defense in the league.

Do you know who leads the league in receiving yards? It’s Dragons wide receiver and return specialist Jéan Constant. With 810 receiving yards and five touchdowns on 55 receptions, Constant is a major threat in the Dragons passing attack. On top of that, his quarterback is no other than Zach Edwards who is the reigning “Chio MVP of the Week” after he stunning performance in week eight against the Centurions.

Constant will face an ultra-talented but young cornerback who he already played against in week one; Marcel Dabo. In that game, Constant was hold to “only” 106 receiving yards and no touchdowns which is a lot, but still under his average receiving yards he gains per game. Dabo recorded three total tackles in that matchup and had a great debut.

Both players will possibly return punts and kick-offs as well to help out their team. Whoever wins this matchup will help his team to stay in the playoff hunt.