Can Leipzig’s offense find a way to beat the Sea Devils? 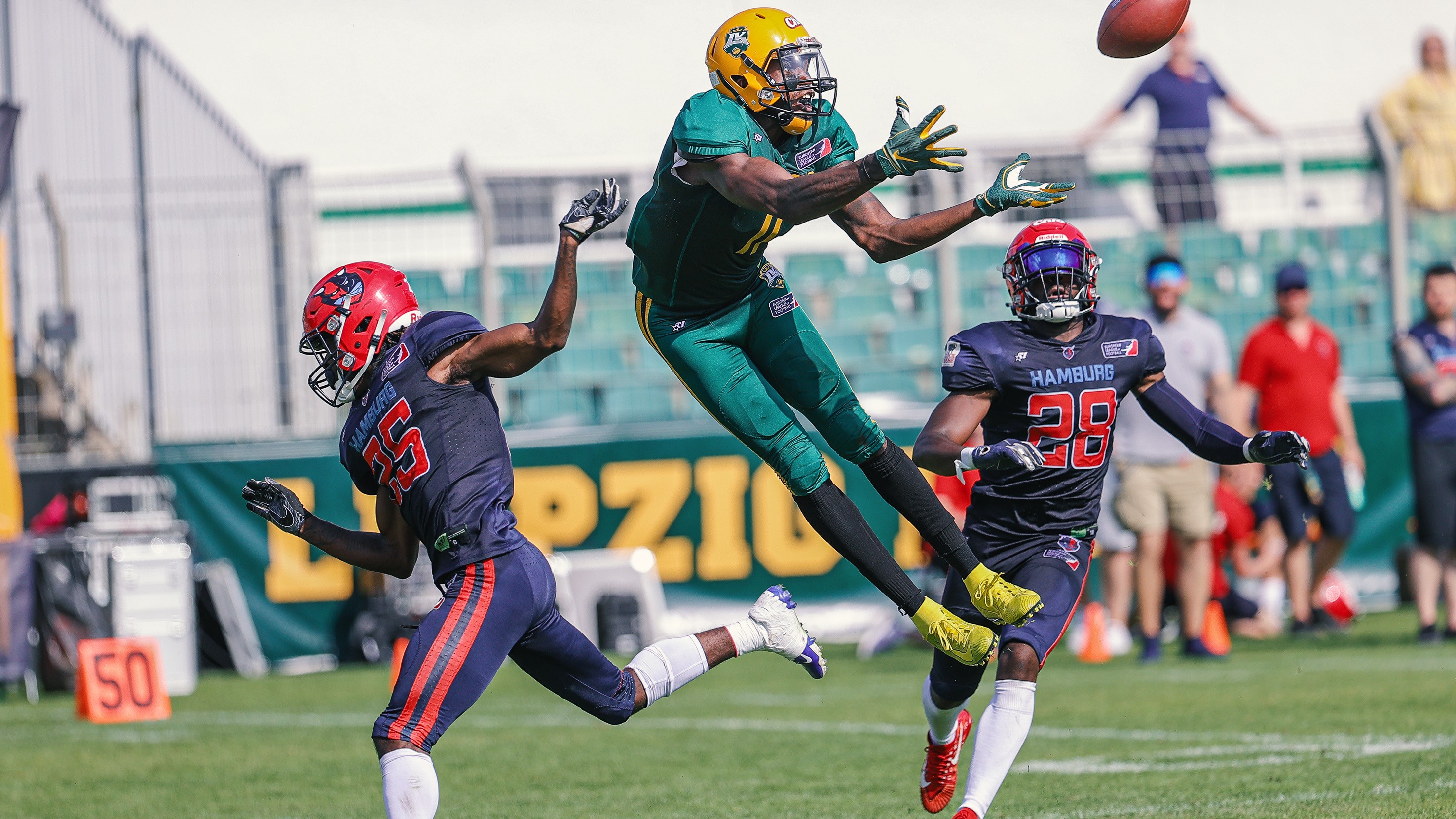 We’ve already seen ten weeks of exciting games in the European League of Football, but there are still two weeks left in the regular season filled with matchups you should look out for.

This week, the 7-1 Frankfurt Galaxy will travel to Barcelona to face the 3-6 Dragons in a thrilling conference game on Saturday at 7 p.m. CEST. With three more games on Sunday, the 2-6 Berlin Thunder will travel to Poland to face the 4-4 Wrocław Panthers. Two hours later, the 4-4 Leipzig Kings will face the 7-2 Sea Devils in Hamburg at 3 p.m. CEST. The last game of the week will be played in Cologne where the 4-4 Centurions host the 2-6 Stuttgart Surge at 5 p.m. CEST.

This is a matchup that must be highlighted. Dragons quarterback Zach Edwards was sacked twelve (!) times last week in the 19-3 loss against the Berlin Thunder. Being under pressure throughout the entire game, Edwards was forced to throw three interceptions but somehow still managed to gain 62 rushing yards on the ground on ten runs.

However, Edwards can put up huge numbers when his offensive line allows him to go through his progression. In their 60-51 win over the Centurions, Edwards was only sacked twice and had enough time to throw for 454 yards and four touchdowns which earned him the “Chio MVP of the Week” award!

This week, the Dragons face one of the best, if not the best, defensive unit in the entire league. Galaxy’s pass rush was able to set the best offensive lines of the league under pressure forcing the quarterback to throw interceptions or to fumble the ball.

In my opinion, the Dragons offensive line must give Edwards enough time to find his receivers in order to have a chance. Otherwise, it will be a long day for the Dragons and their quarterback Edwards once again.

The 4-4 Panthers face a very important game this weekend as they fight for the last playoff spot in the North Conference. Quarterback Lukas O’Connor thrives when he has time and doesn’t face a lot of pressure. Through week ten of the regular season, O’Connor threw eleven interceptions; eight of which he threw against the heavy defensive pressure of the Galaxy in their two conference matchups.

Adding former TCU product KaVontae Turpin into the mix, O’Connor must be set under pressure and forced to make mistakes. Otherwise, he will have too many weapons to choose from to march down the field.

However, the Thunder defense stepped up big time against the Dragons last week. As already mentioned, Berlin racked up twelve sacks and forced seven turnovers in their surprising win over the Dragons.

In my opinion, it all comes down to how well the Panthers protect O’Connor against a stout Thunder defense and how fast the Panthers can get the ball into the hands of their playmakers.

The Sea Devils defense suffered from injuries as key players like Kasim Edebali and Jan-Phillip Bombek were out for the last couple of games. Their backups and the new players signed by the team stepped up and played well, but they allowed much more points compared to the beginning of the season. Throughout their first six games of the season, the Sea Devils allowed on average of 12.5 points to their opponents. In the last couple of games, they allowed an average of 32.5 points to the Galaxy and to the Panthers.

Keeping this difference of 20 points in mind, it won’t get any easier this week against the 4-4 Leipzig Kings and their high-powered offense. The reigning “Chio MVP of the Week”, quarterback Michael Birdsong, was able to throw for 20 touchdowns in only five games as he was sidelined for a few games because of a foot inury. This ranks Birdsong second in the league, right behind Dragons’ quarterback Edwards who threw for 21 touchdowns in nine games!

Having said that, I believe that the Sea Devils must play "bend but don’t break" defense and set Birdsong under pressure to come away with a win after two losses in a row for the number one team in the North Conference.

I am sure a lot of teams, including the Stuttgart Surge, paid close attention to the Kings’ defense after their win against the 4-4 Cologne Centurions last week. The Kings were able to stop star running back Madre London from scoring more than once for the first time this entire season. They held him to “only” 109 rushing yards and an average of 4.4 yards per rushing attempt. Compared to an average of 233.8 rushing yards per game and an average of 7.92 yards per rushing attempt, the Kings did a phenomenal job of slowing down the leading rusher.

This week, the “London Express” will face the Surge defense. In particular, their linebackers. With two American linebackers, Zachary Blair and Ronley Lakalaka, the Surge have the fire-power to disrupt a play and takedown the ball carrier. The two standout linebackers will have to slow down London with the help of the entire defense to give their offense more time on the field to score points.

In my opinion, this matchup comes down to how well the Surge defense and their linebackers can stop the run and contain the league leading rusher Madre London.