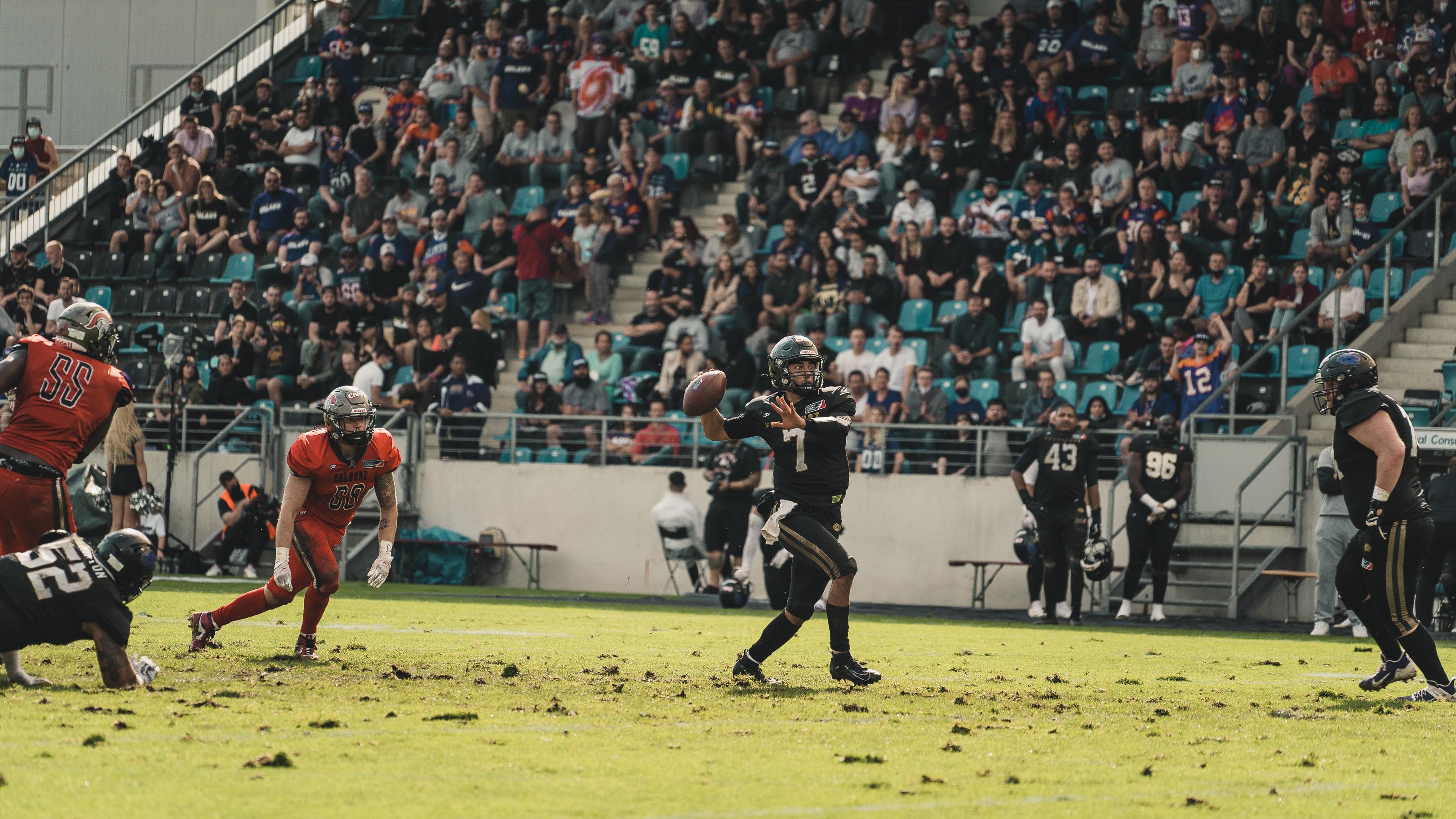 Galaxy QB Sullivan on the field in the playoff-win against the Centurions. ©Frederik Löwer

The Frankfurt Galaxy (9-1) started the playoffs with a dominant win over conference rival Cologne Centurions (5-5) last Saturday. The final score of 36-6 showcased how talented and tough to beat the Galaxy are.

“It’s a great honor and being recognized by the league and fans, [it] means a lot. It also speaks volumes about the guys I have around me. My MVP performances highlight the strength of our entire team, and my production stems from my teammates making plays and doing their jobs day in and day out”, Sullivan told us in an interview.

The Galaxy presumably have the best quarterback room in the European League of Football as their back-up quarterback Moritz Johannknecht was voted “Chio MVP of the Week” after his incredible performance in week twelve.

When asked how the playoff game felt from his perspective, Sullivan pointed towards his talented teammates: “It wasn’t a clean game by any means, but I am happy we won. It was another game that showcased our highly talented group of wide receivers. Guys continue to step up when their name is called and it’s fun to see”.

Having won against the Centurions, Sullivan is more than excited to play in the upcoming Championship Game: “It’s a great feeling for more reasons than I am capable of naming, but I am extremely grateful and am looking forward to representing the Galaxy with my teammates on September 26th on European football’s biggest stage”.

After winning the South Conference, Sullivan talked to his friends and family in the United States, before he joined his teammates to celebrate: “Personally, I was on the phone with my family and friends for a few hours after the game, but then I was able to enjoy the company of my teammates and friends”.

Looking ahead to the Championship Game on September 26th, Sullivan had a message to all the Galaxy fans: “We are looking forward to seeing everyone in Düsseldorf September 26! Wear your purple and be loud!”.

Tickets for the European League of Football Championship Game are still available via Ticketmaster. You can also tune in on ProSieben MAXX, LIVE NOW or on your Gamepass to not miss the first ever Championship Game on September 26th at 2:45 p.m. CEST.