Charles Jones ahead of Rhein Fire: “It will be a hard-fought game”

The Rhein Fire and Hamburg Sea Devils is far from over and right now seems like the start of one of the best matchups Europe has to offer. 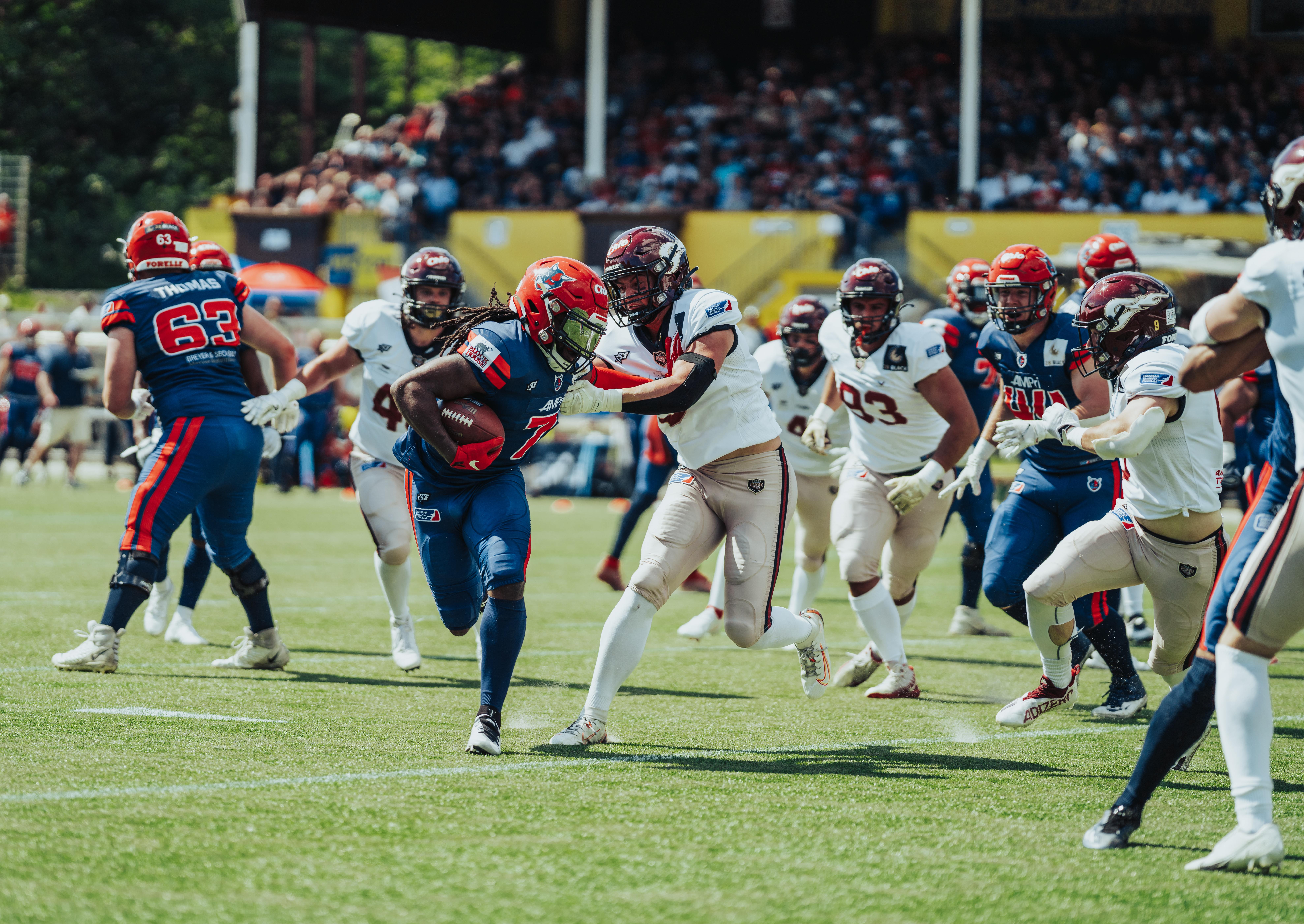 Glen Toonga exploded against Rhein Fire in Week 5 of the European League of Football. © Jonas Wicker

The tension rises ahead of the prime matchup on German free-TV. Even after the first match between Rhein Fire and the Hamburg Sea Devils, the return matchup on Sunday 3 p.m. will be an interesting one. Sea Devils Head Coach Charles Jones understands the importance of the game. "If we want to be successful, we have to constantly work on our performance," Jones explained in the press release. Glen Toonga was the star and CHIO MVP of Week 5 against the Fire. With four touchdowns for him and another one for youngster Simon Homadi, the hopes of Rhein Fire and head coach Jim Tomsula were crushed. But never underestimate Rhein Fire under Tomsula.

Who is starting for Rhein Fire?

In this game, another player could come out on top. Rhein Fire’s newly signed quarterback Jadrian Clark, who could come in sooner or later in the game. A familiar face for all Hamburg Sea Devils fans. A quarterback that not only took them to the Championship Game but also played a great game in Düsseldorf. Either him or Rohat Dagdelen will start over injured Matt Adam.

‍
For the Sea Devils, the strategy seems clear, nevertheless. "One thing we talked about before the bye week was taking momentum into the second half of the season and staying sharp to learn from mistakes," Jones continued, adding about the game, "It's going to be a hard-fought game with strong defense and an offense capable of putting points on the scoreboard with or without Clark."

Stumbling not allowed for both

Since the game against the Barcelona Dragons, the Sea Devils look on-point, still wondering what happened versus the Dragons. “One time we came up short and played good the rest of the game and we need to learn from that”, Jones said but also speaks positively about the previously run-heavy offense: “Against Istanbul, passes and runs were balanced. We keep it balanced if the defense dictates that we are balanced. Hopefully the schemes that we put together for each opponent can help our quarterback continue to mature. Salieu [Ceesay] is learning and that is the fun part. He likes to work and likes improving every time he steps on the field.”

The roster situation looks promising for the Sea Devils, despite some downside. Only Gerald Ameln, Evans Yeboah and Tobias Nill are inactive. Lukas Rehder was suspended one game because of a hit against the Istanbul Rams. The roster is mixed with youngsters and veterans. High praises went out to two guys. “Kasim [Edebali] is a great teammate and player. He helps other to realized things they need to fix. Same thing for Miguel Boock. They love to share what they know. It helps us tremendously. It helps to improve. These veterans are stepping up and help the young guys. That’s what the league is about. Homegrown players being exposed to some of the best players in the league and willing to share the information.” The defense with Edebali and Boock, even without Yeboah, looks scary – while the Sea Devils go in as favorites. Can the Rhein Fire bounce back?