Championship Game: A Closer Look at the Special Teams

Specials teams are more important than you think, especially this Sunday! 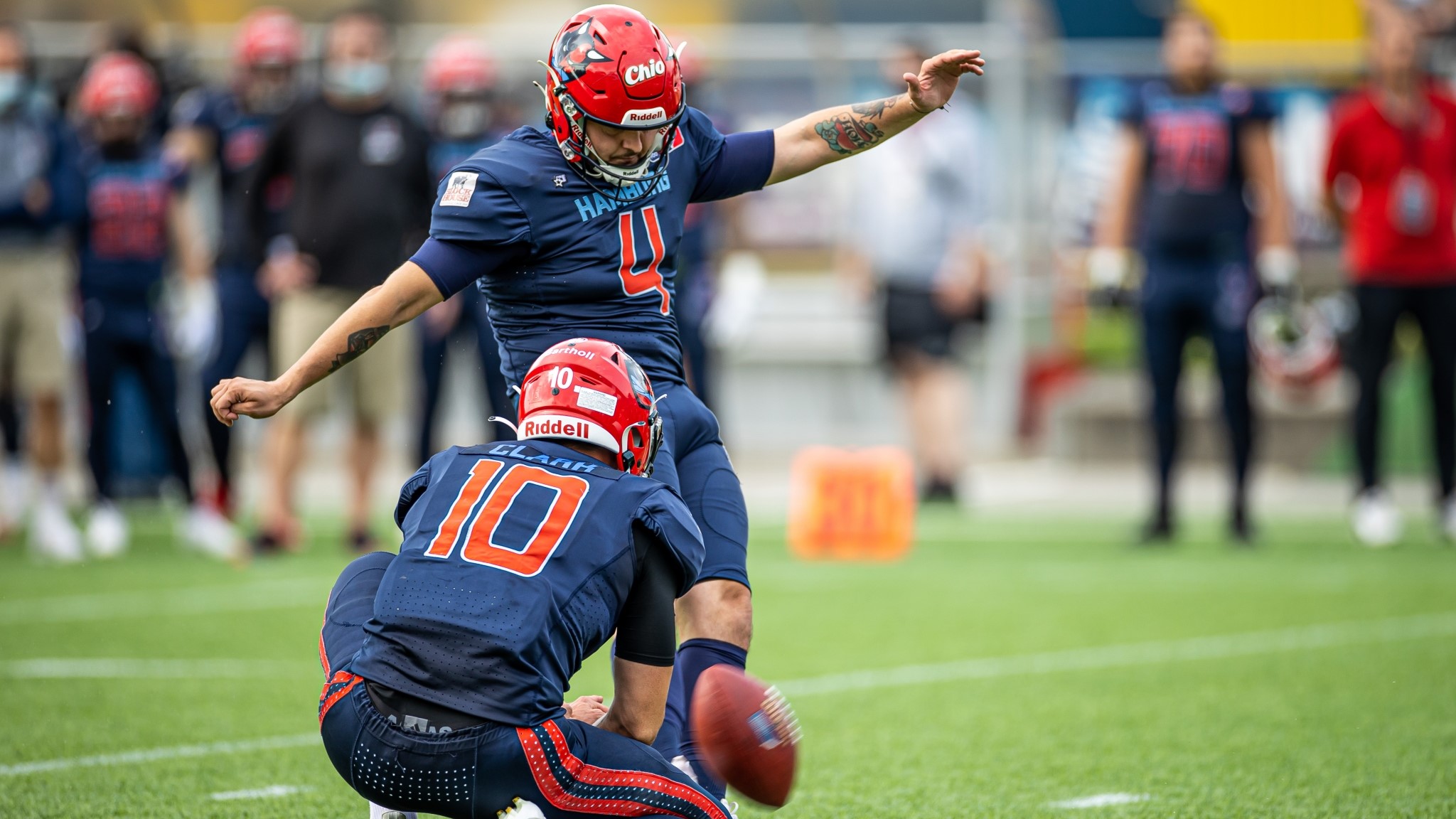 Every football game is impacted by the performance on special teams. A few games are even won or lost because of special teams. At the Championship Game on Sunday, both teams have great special teams with a couple of players standing out.

Let’s have a look at the production and performance of the special teams in 2021 so far.

The Frankfurt Galaxy (9-1) have no All-Star on their special teams unit. Overall, the Galaxy rotate a lot of players fo rkickoffs, field goal attempts, punt returns, and kick returns. Nevertheless, some of the Galaxy players are highly efficient on special teams.

Galaxy's kicking game has not been up to speed compared to the Sea Devils in the 2021 season. Only 50% of field goal attempts were good. On top of that, five of the eight total field goals were made inside the red zone. As far as PATs go, just 57.4% were good as well.

The best kicker on the Galaxy roster was Max Siemssen who converted four out of seven field goal attempts and two field goals which were over 40-yards. Max Ebsen and Luca Sack were not as efficient as Siemssen as they only converted three out of eight field goals combined. However, Ebsen kicked a 48-yard field goal which was the longest field goal for the Galaxy all season.

On kick-offs, wide receiver Nico Strahmann was responsible for 41 kicks. He averaged 60 yards per kick-off and recorded twelve total touchbacks. Ebsen and Sack were responsible for some kick-offs as well. Together, they recorded nine touchbacks and an average of 60.8 yards.

As far as punts go, the Galaxy had their number one punter in Hendrik Schwarz who was on the field for all punts over the 2021 season. He had a net average of 39.4 yards per punt with his longest punt going for 67 yards. In addition, he had six total punts that went further than 50 yards. Overall, Schwarz is a strong and reliable punter for the Galaxy who can flip the field when needed. Look out for his contribution to the game on Sunday!

If you take a look at Galaxy’s return game, they were trying to give some offensive and defensive playmakers chances to advance the ball.

On punts, cornerback Omari Williams fielded 13 out of 22 total punts and had 229 return yards. This results into an average of 17.6 yards per punt return with his longest being a 42-yard return.

Other players who returned punts for the Galaxy over the season were Benjamin Barnes with six returns, Anthony Mahoungou with two returns, and Joshua Poznanski with one return.

Of a total of just 14 kick returns, Mahoungou returned four which is the most on the Galaxy roster. On those four returns, he recorded 124 yards with his longest return being 54 yards. This resulted in an average of 31 yards per return.

Other players who returned kicks were Williams and Barnes who each had three returns. On those returns, both players averaged over 20 yards per kick return. Cheikhou Sow and Justin Rodney each had two kick returns with Rodney breaking loose against the Centurions for a 99-yard return that ended with a touchdown and a backflip in the endzone. Look out for him to be utilized on special teams even more on Sunday!

Hendrik Schwarz, Lorenz Regler, and Gerald Ameln returned one kick each as well.

The Galaxy special teams unit defended 48 kick returns in eleven games and allowed 1255 total yards on kick-off coverage. However, Galaxy only allowed ten total punt returns which went for a total of 86 yards. On top of that, they did not allow a single punt-return touchdown, but two kick-return touchdowns.

The Hamburg Sea Devils (7-3) have arguably the best kicker in the entire league: Phillip Friis Andersen. But this is not even the only advantage they have. All-Star cornerback Justin Rogers is one of the best punt- and kick-returners as well. Look out for both of those players to heavily impact the game on Sunday!

As already mentioned, the Sea Devils have former NFL kicker Phillip Friis Andersen on their roster who made 85.2% of all field goals and 91% of all PATs. He ranks number one in both of those categories amongst all players with more than five field goal attempts and PAT attempts. On top of that, Andersen converted the most field goals in the league (23) and scored 100 points overall over the course of the season. This makes him the leading scorer for the Sea Devils. Running back Xavier Johnson ranks second with 42 points scored and All-Star tight end Adria Botella Moreno ranks third with 36 points scored. This puts into perspective what a huge role Andersen played for the Sea Devils this season and what a role he should play this Sunday!

As if this is not enough, Andersen is perfect from over 50-yard out as he converted all three field goal attempts of over 50 yards. His longest field goal was good from 59 yards out.

On kick-offs, Andersen recorded 35 touchbacks on 64 kicks and averaged 63.7 yards per kick-off. Those numbers are of great importance to the field position which should be crucial going into the Championship Game on Sunday.

Anders was also accountable for all punts for the Sea Devils. Out of 41 total punts, Andersen put twelve punts inside the opponent's 20-yard line. He also had twelve punts over 50 yards with its longest being a 69-yard bomb. He also recorded an average of 37.6 net yards. On top of that, the Sea Devils managed to have no punts blocked over the course of the entire inaugural season.

The Sea Devils have almost double the return yards on punts and kicks combined compared to the Galaxy. On top of that, Hamburg has one of the best returners on their roster: Justin Rogers. The one-time “Chio MVP of the Week” and All-Star player returned 21 kicks for 633 yards and one touchdown. His longest kick-off return went for 95 yards. Those stats all led up to him averaging 30.1 yards per kick-off return. That is a pretty remarkable number considering him setting up the offense at least at the 30-yard line on average if he brings out the ball out of the endzone.

On top of his kick-off return duties, Rogers also returned almost all punts. When doing so, he averaged 20.1 per puntreturn. In total, Rogers had 564 punt return yards and three touchdowns.

When you combine his yards on kick-off returns and punt returns, Rogers had a total of 1197 all-purpose yards (1205 yards if you count in his eight yards on returns off interceptions). This ranks him first on his team and puts Sea Devils running back Johnson second with 1057 all-purpose yards in eleven games played.

All in all, Rogers is a force to be reckonedwith on Sunday. Look out for him to be a difference-maker on defense as well as on special teams.

The Sea Devils statistically have an even better coverage of kick-offs compared to the Galaxy. They only allowed 24.3 yards on kick-off returns and no touchdowns. However, the Sea Devils allowed more return yards on punts with an average of 12.4 yards although they allowing no touchdowns on that end as well.

If you would like to see the all the outstanding players on special teams at the Championship Game, you still have the chance to purchase tickets via Ticketmaster.