The Galaxy and the Sea Devils are two totally different teams when it comes to their receivers! 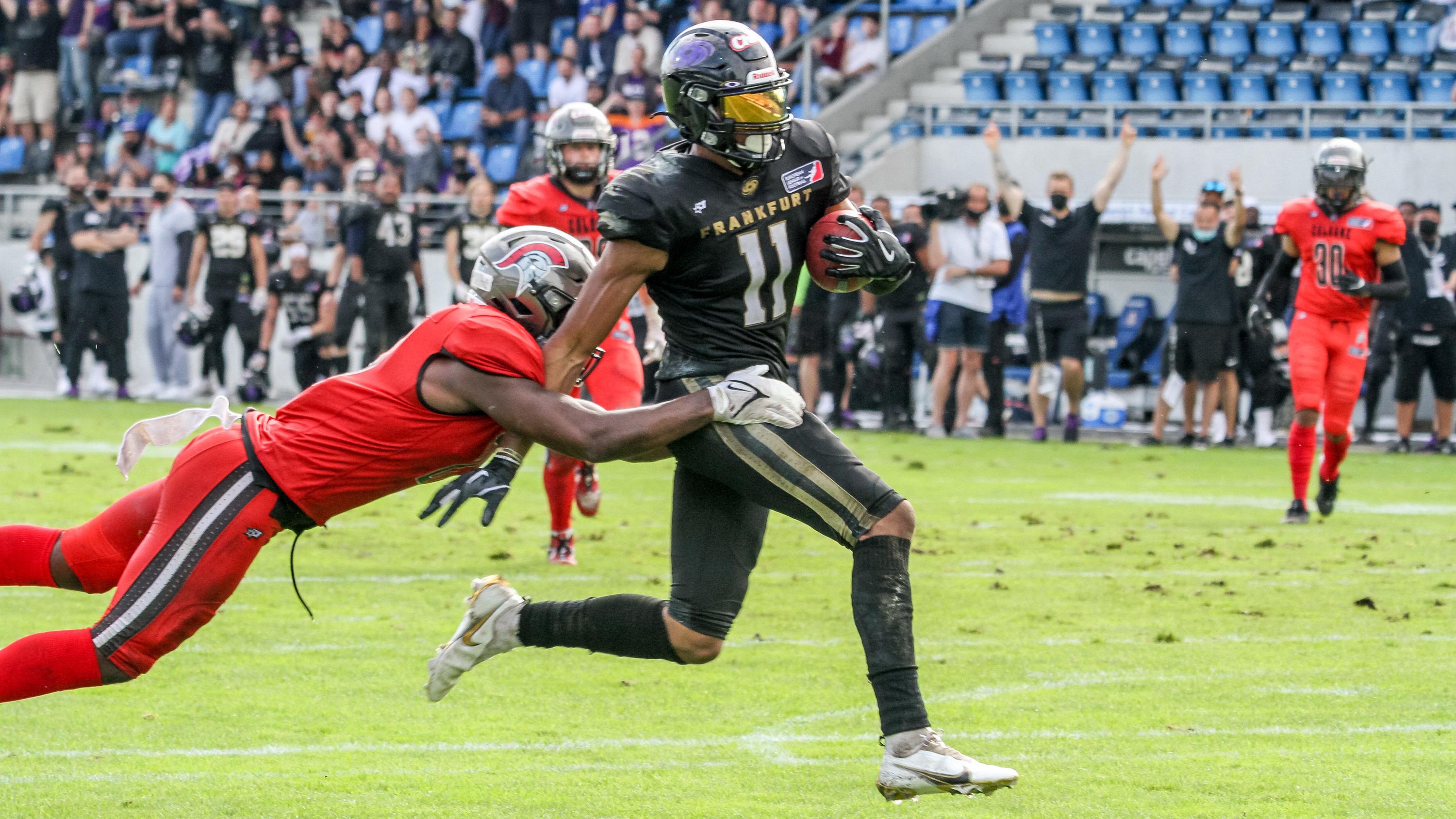 Galaxy WR Mahoungou trying to break a tackle in the playoff-win against the Centurions. ©Marc Junge/Cologne Centurions

The European League of Football featured a number of outstanding passing attacks in its inaugural season. In the final game of the season, the Frankfurt Galaxy (9-1) and the Hamburg Sea Devils (7-3) will try to bring out their best aerial attack to put points on the board.

Let’s have a look at the production and depth of both receiving corps going into the Championship Game.

The Frankfurt Galaxy (9-1) have a dominant receiving corps, especially when you look at their weapons at wide receiver and their production throughout the 2021 season. Their wide receiver room even features former NFL wide receiver Anthony Mahoungou who was voted into the All-Star team by the fans and coaches.

The Galaxy started the inaugural season in the European League of Football without a tight end on their roster. However, they signed Kevin Mwamba after week two of the regular season to bring a new dimension to their offense.

Mwamba played seven total games throughout the season and received 4.7% of all pass completions by the team. By doing so, he recorded 126 receiving yards and two total touchdown receptions. He also averaged 11.5 yards per catch which is comparable to the 11.6 yards per catch averaged by the team overall.

When you look at the wide receiver group of the Frankfurt Galaxy, you find a list of five players who all recorded more than 300 receiving yards. This productions stems from the sheer number of completions: 85.8% of all completed passes by the Galaxy quarterbacks were caught by their wide receivers. On top of that, Anthony Mahoungou, Marvin Rutsch, Nico Strahmann, and Hendrik Schwarz were active in all eleven games played by the Galaxy this season.

A player who stood out is former NFL wideout and All-Star player Anthony Mahoungou. He alone caught seven touchdowns which is the most by any player on the Galaxy roster. He also hauled in 36 catches for 534 yards which both are team records as well.

Lorenz Regler has the most yards per game as he averaged 49.6 receiving yards in each game he played. On top of that, Regler recorded 17.2 yards per catch which is a Galaxy team record as well. Despite leading the team in those two categories, he was not able to lead the team in receiving yards as he missed two games due to injury: his last one being the South Conference playoff game against the Centurions.

The Hamburg Sea Devils (7-3) have a totally different approach when it comes to their passing game. Instead of leaning on their wide receivers for a majority of pass completions, the Sea Devils have one of the best tight ends in the league who is used like their number one receiver: All-Star Adria Botella Moreno.

Overall, the Sea Devils receiving corps came up with 9.3 yards per catch and a total of 17 touchdown receptions. ‍

As already mentioned, All-Star tight end Adria Botella Moreno is one of the best tight ends in the league. He leads the Sea Devils with 612 receiving yards, 11.8 yards per catch, six touchdown receptions, and 61.2 receiving yards per game. On top of his freakish perfomances throught the season, John Levi Kruse was responsible for 80 receiving yards and two scores as well.

The leading wide receiver for the Sea Devils, Jean-Claude Madin Cerezo, came up with 318 receiving yards and five touchdowns in ten games played. On top of that, Madin Cerezo is the only player who even played ten or more games alongside tight end Botella Moreno. All the other wide receivers and tight ends played in nine or less games due to injuries.

One player to look out for at the Championship Game is wide receiver Kwame Ofori. Over the course of the season, Ofori had the most receiving yards per catch (16.8) and had his strongest performance in the playoffs against the Panthers. In that game, Ofori recorded his lone touchdown of the season on a 31-yard reception.

If you would like to see the wide receivers and tight ends of both teams at the Championship Game, you still have the chance to purchase tickets via Ticketmaster.