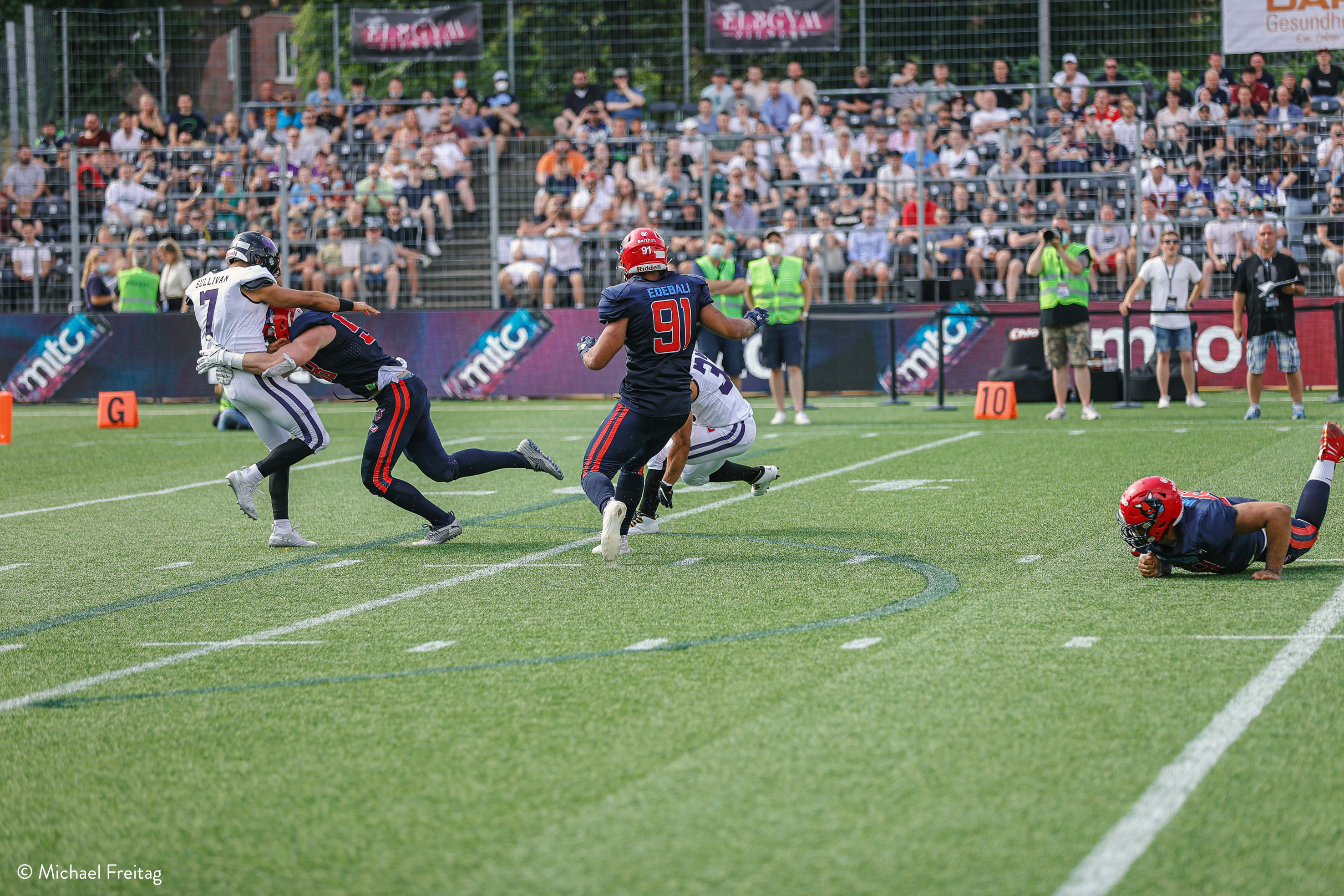 We had some incredible plays and highlights in the first week of the regular season. With this only being the start of the inaugural season of the European League of Football, there are still great highlights to come. But the fans already had the opportunity to watch their hometown players ball out on a high level.

To start with the best defensive performances, one player who stood out despite playing only in the first half was Panthers defensive back Darius Robinson. Robinson used his time on the field and was incredibly effective: two interceptions including one pick six and four tackles with a tackle for loss. He showed what he can do, if healthy. Other defensive backs with high production were Iiro Pekkarinen, Jamaal White, Marloshawn Franklin Jr., and Joshua Poznanski. Each of them came up with an interception for their team which shows that there are some serious ballhawks in this league.

Stuttgart Surge linebacker Dale Warren got 15 tackles, one and a half sacks and three tackles for loss. With Leipzig Kings‘ Olav Rohneback (12 tackles, 3 tackles for loss) and Berlin Thunder’s Wael Nasri (14 tackles, 0,5 Sacks, 2 tackles for loss), the three players were the leaders of all eight defenses in the league. Olav Rohneback, Aslan Zetterberg and Vincent Buffet each had at least two sacks for the Kings’ defense. Another guy that came up big was Sea Devils linebacker and former Division I player Jan-Phillip Bombek who made profit out of the consistent pressure provided by Kasim Edebali on the other side of the line.

On the offensive side, we had a lot of players that had outstanding performances. Leipzig Kings quarterback Michael Birdsong has a good arsenal of weapons he can throw to but Leipzig wide receiver Timothy Knuettel stood out with two touchdown catches. Overall, four touchdowns and 215 yards thrown by Birdsong put the Kings on top. Panthers receiver Banat had himself a day with two touchdowns as well. Also performing well was Barcelona Dragons quarterback Zach Edwards who had two touchdowns and 313 yards in his lone contest. The only player throwing for more yards the was the Wroclaw Panthers quarterback and “Chio MVP of the Week” Lukas O’Connor. The American threw for 364 yards on 42 attempts and scored five touchdowns. He balled out and was able to produce 55 points in his first game against the Centurions.

One guy to watch in the upcoming week is Madre London. Despite losing against the Panthers in week one, he already ran for 269 yards and three total touchdowns. A truly remarkable statistic. As we expected, Barcelona Dragons receiver and returner Jéan Constant had great returns against the Surge. A weapon on special teams everyone should take a look at as well is Leipzig Kings hybrid- player Alpha Jalloh. Jalloh had 120 yards just from kickoff returns including a touchdown. One of the fastest and shiftiest guys in the league for sure.