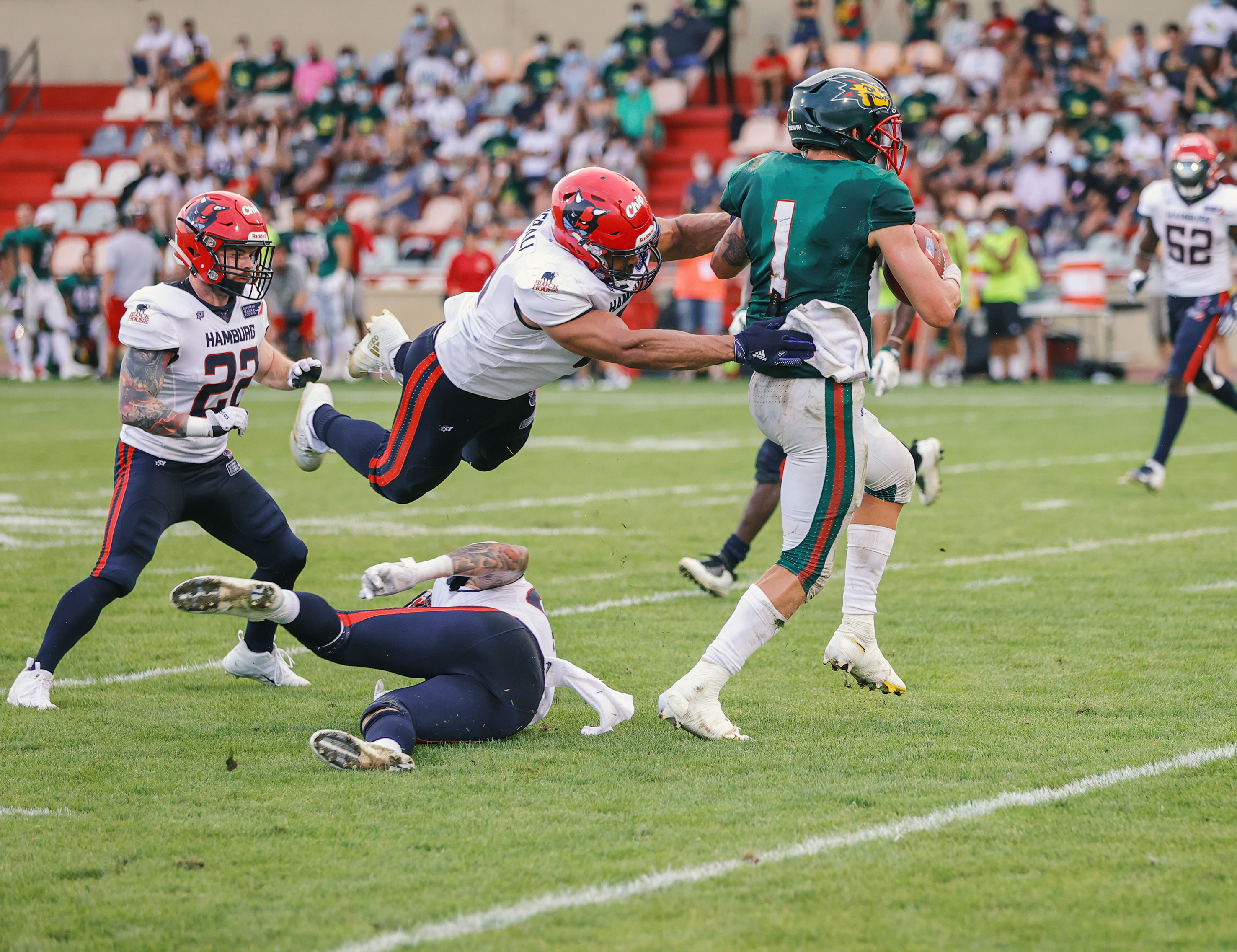 The upcoming fourth week in the European League of Football promises a lot of great matchups. The 2-1 Frankfurt Galaxy will travel to Cologne to meet the 2-1 Centurions in an exciting showdown between southern conference rivals on Sunday at 3pm CEST. The 1-2 Leipzig Kings will travel down south to the 1-2 Stuttgart Surge to face yet another interconference opponent on Sunday at 3pm CEST as well. The third game of this week includes the 2-0 Hamburg Sea Devils who will host the 1-1 Berlin Thunder at home at 6pm CEST. All three games promise exciting matchups that you should look out for on Sunday.

The Cologne Centurions are a run-heavy team. But handing the ball off to running back Madre London 44 times in week three is as run-heavy as gets. London was able to run yet again for 4 touchdowns and 348 net rushing yards in his last game. He now has 11 rushing touchdowns and almost 1000 yards rushing in just three games played. However, the Frankfurt Galaxy defense showed what it can do against the run on a rainy day at the PSD Bank Arena last week. They were able to stop the run on most attempts, only allowing one 50-yard run by Panthers running back Pasqualini. In my opinion, it will all come down to how well the Galaxy defense holds up against Centurions running back Madre London.

The Leipzig Kings passing attack was more then efficient in their week three loss against the Cologne Centurions, although they had to play with their backup quarterback. Jaleel Awini threw for four touchdowns and 341 passing yards while distributing the ball to seven different receivers. Awini was also ultra-efficient on designed quarterback runs which led him to a total of 147 net rushing yards and one score on the ground. On the other side, the Stuttgart Surge defense allowed reigning “Chio MVP of the Week” wide receiver Seantavius Jones to catch three touchdowns in the first half of the game last week. It will be interesting to see how the Stuttgart Surge secondary holds up against such a high-powered Kings passing attack on Sunday.

The Hamburg Sea Devils had a strong defensive performance in Reus last Saturday. With constant pressure by former NFL player Kasim Edebali, the rest of the Sea Devils defensive line got through to Dragons quarterback Zach Edwards numerous times. Looking ahead to Hamburg’s week four matchup against Berlin, constant pressure from their defensive line could also be the key to success as they have to focus on containing dual-threat quarterback Calvin Stitt as well as on stopping the run. In particular, stopping the run against Berlin will be a task in itself as Thunder running back Joc Crawford exploded for 227 net rushing yards and two scores on the ground last week. So, the Sea Devils defensive line will try to be as dominant against Berlin as they were against the Barcelona Dragons last week to stay unbeaten when the fourth week of the regular season is over.