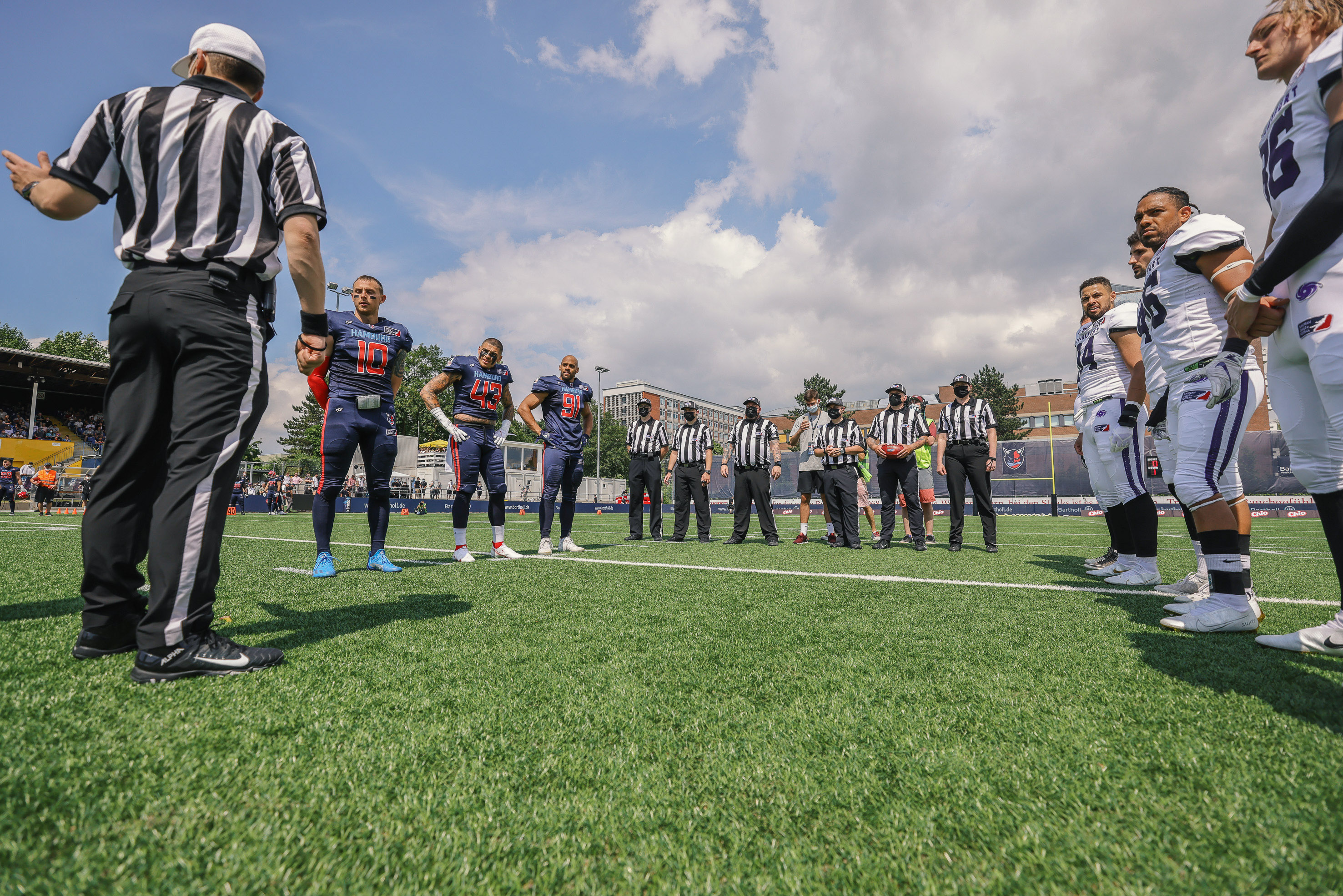 Referee Scholz before kick-off at the first televised game of the European League of Football in week one. Credit: Michael Freitag

The European League of Football has many great coaches and unbelievable players, but there is more to a football game. Officials also play an important part on the football field as the Referee, the so called “White Head”, Malte Scholz explained to us an in interview. We talked to Scholz about his job as a referee and he walked us through his weekly routine during the regular season in the European League of Football.

The Job of a White Head

Scholz started to be an American football official when he was 15-years old. With over 14 years of experience, he qualified to work as a Referee on gamedays: “At the end of the day, I’m just an official like every other official on the field. There are no situations in which I am the boss and overrule someone and say, ‘that’s my decision’. All officials have the same say on the field, I’m just the one who gets to announce the penalties and the one who is responsible for the crew. That includes everything that happens on an organizational level, planning the preparation for games, being in contact with the teams, and reviewing the games with my crew […]”.

“The most important thing is that we prepare us for gamedays just like the teams. And we also have our individual preparation like going for runs and working out at the gym. We don’t have the luxury to have a break during games” said Scholz with a smile.

Working as a Referee in American football, Scholz explained that officials have to study film to be prepared for a game: “When we prepare ourselves for a game, every official studies a different part of the teams. Me personally, I look at the quarterbacks and how they usually play their game and I also look at the kickers. Another official would look at the offensive and the defensive line. And usually on Thursday, we have a meeting with the entire crew to study film of the two teams that play each other”.

Scholz emphasized that studying the film just like the players helps officials to understand certain plays: “We just prepare for certain plays that could happen. For example, some quarterbacks like to run the ball and then pass the ball at the last possible moment before they cross the line of scrimmage. Other quarterbacks take off and run, and you know they will most likely keep running. Things like that prepare us for what is most probably about to happen”. However, Scholz explained that studying film just gives the officials an idea of what could happen and not what is going to happen: “You can’t be sure though, those are all just tendencies. You always expect the unexpected”.

In our interview, Scholz summarized what officials usually do on the day of a game. Besides knowing the rules, throwing the yellow flags, and announcing the calls made by him and his crew on the field, an referee usually has a certain schedule to follow: “On gameday, all officials are at the stadium around three hours before kick-off. Then you prepare everything for the game, go through some possible scenarios mentally, warm up with the players and then you’re in the game”.

As Scholz explained, the officials travel home after a game and start to reflect on their performance and give feedback to the other crews of officials as well: “Technically, we review the game on Sunday night, on Monday or at the latest on Tuesday. And a game also gets reviewed by another official who wasn’t at the game.This referee looks at missed calls or if a call was a possible ‘marginal call’ which are fouls by rule but shouldn’t be called according to the philosophy of the game. For example, a holding that doesn’t have an impact on the play. You don’t call that. Then, you look at your own game and at the review by the official who wasn’t at the game […]”.

Although Scholz and his crew are prepared, there is one big challenge remaining for officials: “The biggest challenge is to only be present if it’s absolutely necessary. During the game, it’s not about us, it’s about the players and the game itself. But at the same time, we must guarantee a fair and balanced game,and that’s the challenge. […] We are seven referees on the field and that means you must have great teamwork and communication. […] And I think we did our job best if no one talks about us after the game”.